What Christmas Really Means to Me 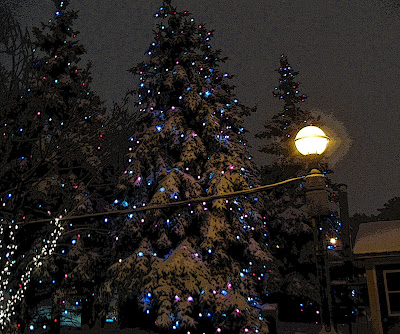 As you probably know I'm an atheist. I don't believe in God. I believe a cosmic fluke explains the presence of humans on this beautiful blue planet. And that it's up to those humans to determine whether it will be their heaven or their HELL.

But I still love Christmas.

I know it can be a sad time for the sick, the poor, and the lonely. Just like it can be a hard time for many gays and lesbians driven from their homes, or alienated from their families, by the hatred created and stoked by evil religion.

But still I love the bright coloured lights, the parties, the food, the excitement in the eyes of the kids, and of course the movies.

All the usual suspects, A Christmas Carol, How the Grinch Stole Christmas, Miracle on 34th Street, and It's a Wonderful Life...with the sign on the wall of Pa Bailey's place: "All you can take with you is that which you have given away." Try taking that one to the bank these days.

But also since I was about five years old, The Small One, a story about a boy who is forced to sell his best friend...a little old donkey who had been abused by others all his life. But the only one who wants to buy him is a tanner, for his HIDE.

Until the magic moment arrives...

I don't know why I like that story so much. I've got a scientific mind. I don't believe in manger myths. But it's probably got something to do with hope, and my belief that we should respect and celebrate the humble creatures who share this planet with us.

And then there's the music. Not just the Christmas carols I've been known to sing in the street when I'm.....um....a little TOO merry. But the songs I used to sing in churches when I was a boy...

The words meant nothing to me then, and they don't mean anything to me now. But isn't the sound of human voices HEAVENLY ?

Imagine how great we could be if we could all work together to make a world as beautiful as that sound. A world where peace replaced war, and love replaced hate. And gay people could live in peace and dignity instead of being insulted, attacked, and killed just for who they are.

So that's what Christmas really means to me. Coloured lights, sweet movies and music, good times with the ones I love, and the hope and promise of a better tomorrow....of a heaven for everyone right here on planet Earth.

From me, my shining star Sébastien, and my little reindeer Kerouac... And a Merry Christmas to you as well, Simon. From one atheist to another. :-)

Thanks Simon, I have a golden lab, and I loved the donkey story. I too am an atheist, or agnostic.
I know there is something beyond here but I don't know what that is, but I don't believe in some mythical all knowing caring being.
Merry Christmas to you.

Greetings and salutations from another non-believer.

Merry Christmas, Simon, from one heathen to another ;)

Love the pic of Kerouac! Did you get that hat just for him?? Too cute!

I'm a pagan, and I have to chuckle at how much of the Old Religion(s) got sucked up into this form. What a pity the Religious Reich don't believe in evolution, because their own beliefs are a PRODUCT of it. An oftentimes strange, distorted and demented product, mind you...

Another Heathen here to wish you a Merry Christmas, although belated. Simon, I love this holiday even though I am an atheist.

I think you described what I love best about it. It's the sounds, sights, smells and touch of the season. It's the opportunity to reflect and dream and think that human kind has the potential to be better.

Kerouac looks adorable. As one animal lover to another, I know exactly why you love that donkey story.

Someday the sorry destructive torch of monotheism will pass. It won't occur in 2009, but we can all have a dream.

Hi Frank... and thanks!! I hope you had a good one.I'm afraid that post won't make it into the Atheist Hall of Fame...too many disturbing religious images. But WTF I try to see the good part of everything...and any excuse to party at this time of the year is good enough for me !!! :)

Hi Jan...thank you and I hope you had a great Christmas. I don't believe in anything out there...apart from the occasional nightmare that we're just play things in a child's toy box. But what makes me a louder atheist than I would normally be is the notion that this world doesn't count because we are only here to prepare for a better one. Which at a time like this is a sure road to disaster...
Anyway I'm glad you have a lab too...and that you liked the donkey story. I have to admit that it STILL chokes me up.... :)

Greeting West End Bob...actually I prefer to think that I am celebrating the pagan festival where you can do just about anything as long as it's FUN !!!
BTW do ya'll stuff the wild turkey with crackers or grits ? :)

Hi JJ ....and Merry Christmas !!! I'm glad you liked the photo of Kerouac. One of my friends gave me the antlers last Christmas, and that and another shot are the only ones I have, because after about a minute of walking about Kerouac decided he didn't like them, and flipped them off his head. But he LOVES the bells and he's been wearing them every Christmas for 12years... :)

Hi Bina....Merry Pagan Feast !!! Yes it's funny isn't it ? The religiously deluded can't compete with the power of the sun to get us all partying, so they had to replace it with something more restrained and grim. However, unfortunately for them, our desire to celebrate the cycles of nature AND the science of evolution are STRONGER than them...

Hi Beijing...and Merry Heathenmas to you !!! I think what I like best about the season, apart from all the things you mention, is that it's a season that celebrates kindness. I'm totally not into the shopping thing, so I only take the good stuff and make it work for me.
You're right that I'm a huge animal lover, but there's another thing that makes me choke up in that story. And that's because the donkey is old nobody wants him. Just like in an animal shelter everyone wants to adopt a puppy and the older dogs are left behind.I find that so sad I can't even go into an animal shelter anymore because I'd want to adopt ALL the old dogs. And believe me if I ever live on a farm I will... :)

Hi Omar...and Seasons Greetings to you too !!
Yes I believe it will be replaced one day by a more humanist faith that celebrates our common humanity, so we can build a better world. As you know, although I have my lapses, I'm usually pretty hopeful....and therefore frequently disappointed. :)
But I don't care because I think the state of the planet will force people to come to their senses. Because the alternative is too awful...

a belated merry christmas to you, simon! i'm a sucker for a turkey dinner at ex-mass.....oodles of stuffing and gravy, but i like the things you mentioned too :D

All the best from a gay progressive Anglican :)