Obama, Rick Warren and the Donuts 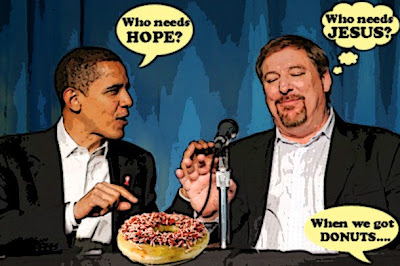 Well it seems that Rick Warren's comments about feeding donuts to faggots has come back to haunt him.

In a very small way. I mean why send a donut when you can throw one?

.....this all but guarantees that during the invocation, Rick Warren will be pelted with donuts. Listen carefully for the shouts of "This is a farewell kiss, you dog!" and don't say I didn't warn you.

Although I think that might be dangerous. Tubby could fall off his pedestal trying to grab a creamy donut....and EAT it.

But then he has so many other questions to worry about.

And as for Obama...... well the timing couldn't be worse.

It's as if Warren and his buddy's want to ruin Obama's inauguration. Just imagine what will happen if Rick Warren's buddies kill 18,000 marriages of gay couples days before Obama is sworn in with the obese bigot by his side.

Tonight candlelight vigils are being held in support of the 18,000 gay couples whose marriages could soon be annulled.

My suggestion? Move these vigils to Washington on Inauguration Day. And turn them into a Freedom Protest....or a joyous riot. With flags, banners, whistles, noisemakers, waterguns....... and of course donuts.

In the meantime I think Obama should use the holiday season to reflect on his unfortunate choice of Rick Warren as the Grinch that Stole the Inauguration.. As well as his views on gay marriage. So he can one day understand that gay marriage isn't a religious thing....it's a human right.

And that the new gay generation,that makes up some of his best foot soldiers, isn't about to be denied....by ANYONE.

Show Obama that Change means Change. Not kissing the bigoted ass of the religious right.

Bring your anger and your HOPE.

How 'bout a run on Tim Horton's for donuts and TimBits to ship to our brothers and sisters in DC ? ? ? ?

Kudos! I hadn't heard the donut story before. The trick is to throw two of them before you're wrestled to the ground. :)

Hi west End Bob...thanks and of course a dunkin donut simply would not do, it would HAVE to be a Tim Horton's one eh?
I'm thinking of a Boston Cream pie...they are not just nice and squishy.... they are really easy to throw... :)

Hi Luke...I'm glad you like my little blog. But as for the donuts...well that's my secret plan.
I figure if we can get him to gobble up about fifty he'll probably EXPLODE !!!! :)

Hi Dr Dawg...you know a few days ago I saw him quoted as saying that he doesn't hate gays because he's "had dinner with them." And now this !!!
Why when he thinks of us does he think of FOOD? Scary. I need to know more, just like I need to find out which gay people have been grubbing with that homophobe so I can send them donuts too.
And you're right actually winging them off might be hard...especially if you don't want to make the No Fly list... :)