The Hospital and the Homophobes 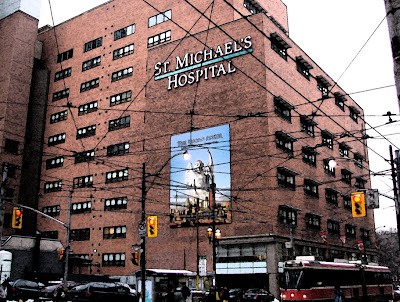 St Michael's Hospital is a Catholic hospital affilated with the University of Toronto, located not far from the city's Gay Village.

A hospital which is now being attacked by the Catholic extremists at LifeShite News for having a gay flag in its lobby.

“It is sad to see St. Michael's hospital promoting the homosexual agenda. In the past the same hospital has funded the 'Gay Pride' parade. A Catholic institution should know well that promoting such a destructive lifestyle is against Christian charity. The idea behind such a decision is gravely malformed.

When in fact what is gravely malformed is that article. One because the flag has been there for years. And two because all decent Catholics should be proud not ashamed of what that hospital has accomplished.

You see up until about ten years ago most of the gay people who live in the Village used to go to another hospital. Then that hospital was closed, and most of its services moved to St Mike's.

But there was a problem. Many gay people were reluctant to go there, because they were afraid they would be treated badly in a building full of stone angels. 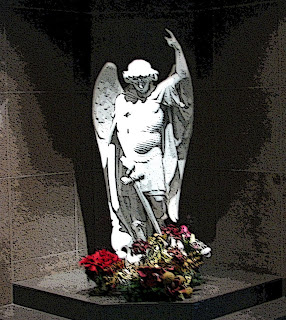 So the administrators and the staff reached out to the gay community in a truly amazing way. They hung the gay flag in the lobby, supported certain community events, and did everything they could to send out a welcoming message....and live up to the hospital's core values.

Especially the one on human dignity.

We value each person as a unique individual with a right to be respected and accepted.

And it worked. The barriers of distrust came down, the gay people came, and now nobody would think twice about going there. Just like I didn't when I banged up my knee last winter.

The staff were professional and super friendly, and when Sebastien dropped by to check on me he was treated with respect and as a member of the family. Which of course is what a hospital should be all about....helping and healing people and making them feel at home no matter who they are.

The administrators and staff of St Mike's deserve to be congratulated for their decency.... and their creativity.

The bigots at Lifeshite should hang their heads in shame.

They really are DISGUSTING...
Posted by Simon at 10:32 PM

The catholic is the one with the 'agenda' here. And as for "destructive lifestyle", funny, but I'd rather think they should keep these accusations to themselves, they who have so much blood on their hands.

I should do my apostasy, I'm tired to be registered in the same club as these clowns...

thanks to the link at Lifeshite, I sent this note to St. Mikes (where my Aunt was a nurse for many years):

You are about to get inundated by hateful screeds from the bigots and extremists at 'Lifesite". Let me just say this:

Stand your ground, you are doing the right thing. It is never wrong to treat humans - all humans - with respect and dignity.

The angry bigots who will write you will no doubt throw Numbers and Deuteronomy in your face.

Don't let the shouting hatred of these so-called "Christians" deter you from doing what you know is right."

Funny how the only "life" the Shites care about is that of a fetus.

But if that fetus happens to be diagnosed as gay (should such a test ever arise), just watch. Abortion will suddenly become a sacrament, just as Gloria Steinem once said it would!

Snort. According to the good brethren, there can't be a 'pre-born test' for err..gaiety of the laity, since 'the lifestyle' is a conscious corruption away from Suzie All-Caps' Catholic 'natural law'. It's just Satan messing with the readouts.

Honestly, if these people have such godly troubles with dispensing medical aid, they should build private hospitals and fill them with only the treatments they approve of and then force *their* followers to *only* attend there. And then they can wonder why their numbers are dropping even faster.

For me, seeing a Pride flag in a shop window or hospital simply means I don't have to be worried about being treated assily by homophobic staff and doctors.

I once went to a walk-in clinic for an upper-leg / groin pain that was hard to pinpoint. The doctor was asking me about potential sports injuries and basic sexual health questions until I clarified that I had a boyfriend, not a girlfriend. He stopped his physical inspection said "Oh, for these cases it's probably an STI." He prescribed me some antibiotics, ordered STI tests, and then told me to tell my boyfriend "and all my other partners" (as if I were the village bicycle) to do the same.

After freaking out over somehow possibly having an STI and getting a week-long stomach ache from the antibiotics (not to mention the unmentionable horrors of blood, urine, and, worst of all, swab tests for STIs), all the tests came back perfectly clean. (Not a surprise since I'm not at all a risky guy.)

A competent doctor, shocked that I was put on antibiotics without any signs of infection, correctly diagnosed that the pain was likely due to the way I was sitting on my old office folding chair. Replacing the chair solved everything.

So, yeah, heterosexuals can't even imagine the relief I feel when I see a Pride flag in windows and service lobbies. That these anti-gay lobbyists try to remove them wherever possible is maddeningly petty.

Hi RB....yes I was amused by that too. I can only imagine the excitement back at Lifeshite headquarters... scoop!!! scoop!!!
When of course coming from them it's more like poop poop... :)

Hi Enkidu's Palace...as you know I spend a fair amount of time criticizing the Vatican crew for their obsession with homosexuality. But this time I'm actually glad to be able to single out a Catholic institution and applaud it for acting like good Christians should.
Although I'm not religious myself I judge ordinary religious people on the content of their character, and how they treat others.
If they are decent kind people I don't hold their religion against them. Which is just as well since most of my friends are Catholics.... :)

Hi Mike...hey thanks a lot. What a good idea and what a great message.
I'm sure it will cheer up good people at that hospital. I remember reading a super post you did about violence against women. And thinking those kids are lucky to have such a great dad.
And now your aunt will be proud of you too !!! :)

Hi Bina ....yes those bigots at Lifeshite live in a parallel universe....where good is bad and love is hate.
If I didn't hate their message so much I'd probably feel sorry for them. What a way to live your life. PATHETIC...

Hi Niles....you know I used to have nightmares thinking what might happen if I got into an accident in Montreal...and when I woke up I was lying on an operating room table and Dr Roy was staring down at me demanding to know if I was a Lieberal !!!
But waking up in a Lifeshite hospital would be even worse. The first thing they'd do would be strap an electrode on your penis to determine if you were gay...ugh...horrible.... :)

Hi Mark...yikes that's a good story...although frightening too.
It's something straight people don't have to deal with. You know the moment when the person at the reception desk asks you all those questions, and then comes to the one where they ask you who to call in an emergency. And when you tell them they ask you the relationship, and you think should I just say "friend" because that would be safer. But of course you end up saying partner, and then you wonder how they are going to treat you. When I turned up at at St Mikes and the nurse asked me that question, and when I replied made a sweet little joke, and we both laughed. Then I knew I would be OK.... :)