The Crazy Cons and the Blogging Tories 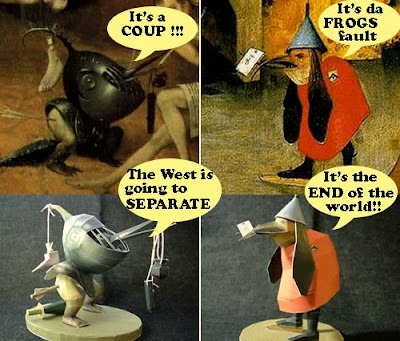 Uh oh. I see the crazy desperate Cons are having a real hard time adjusting to the new reality.

Tory MPs who face defeat in a confidence motion Monday called the unprecedented move a "coup d'etat" and a "deal with the devil."

And so are their stooges at the Blogging Tories.

Classy eh? I wish the Junker would stick to denying Global warming. Instead of insulting Quebec AND Canada. Why do these nasty Cons HATE their country so much?

And then of course there's Stephen Taylor, the Master of the Blogging Tories. Yesterday he was furiously peddling the tapes of the NDP meeting the Con operatives secretly bugged.Today he was scrambling for higher ground.

Good timing Stevie Two. Stevie One would be proud of you.

And then of course for comic relief there's always Small Dead Chihuahuas. Who is so distraught at the sudden collapse of the Cons you'd think she was being bombarded by asteroids.

Golly. I wonder how you do the happy bum dance? Do the separatist rednecks take two steps forward. And then six steps backwards. Wiggle their bums. And then SHIT themselves?

Never mind I don't want to know. Let them shit in peace.

While we get up and wiggle OUR bums.

To this old VICTORY song....

Aaaah yes...WE are the Champions my friends .....they are the LOSERS of all time.

They don't realize that yet. Recognize that they are on the losing side of history.

While people are always more passionate when they rally against something, I think it's super important to attend the pro-coalition rallies if you support the coalition.

It's important that Canadians see that the majority of people support this coalition, and that it's a reasonable and democratic thing to do. All these claims of "undemocratically overturning the election results" is nonsensical rhetoric. Coalition governments are common worldwide in house minorities, the parliament consists of exactly the same MPs that were elected by us in October, and the fact remains is that most Canadians voted for a progressive party---the conservatives never had a mandate to govern.

cryi'n-steve. i'm surprised we haven't heard from his mother yet. so the boy in the suit wanted to play chess, has all along, and finally the opposition teamed up against him. FINALLY. the market dove by 800 points, no one's sure of anything and some mayhem and shaking up is what's needed.

look at the system...it's ridiculous. steve's in check and has called up canada's biggest , beautiful (she is a sexy doll, too bad about her leanings) hypocrite to try to bail him out....so what will michele jean do, appoint a coalition of cons, bloc, a liberal or two and MAYBE one ndp???

jean will help move a few pawns, a bishop and castle or two to get steve away from being in check-mate. coalition, don't celebrate too early....steve may be an asshole but he's clever, very clever. let's see what the GG has to deliver in return for yet more aid to haiti.

Hi Mark...hey I agree with you. I'll be going to the one in Toronto which I just learned is only a few blocks away from where the Conservatives are holding their rally. Hmmmm... ;)
As for the reaction from the Con side about a coup and other nonsense....it beggars belief how ignorant and parochial they are. As you point out coalitions are common all over the world, but to hear these dumbo rednecks you'd think the Coalition had invented them. Lordy are they in for a shock... :)

Hi Scout...you're right about not celebrating too early. Although of course I ALWAYS do. My friends say that's because I'm always looking for an excuse to party. But I tell those ignoramuses it's just a sign of my faith in a better world.
As for Harper, he may be intelligent, but I think anyone who could slip that toxic stuff into an economic update, at a time like this one, is missing a screw somewhere. And if the GG sticks to the rules, and doesn't let Harper intimidate her, I can't see how she can stand in the way of a coalition government.
Touch wood... :)