Burying the Coalition Before it's Dead 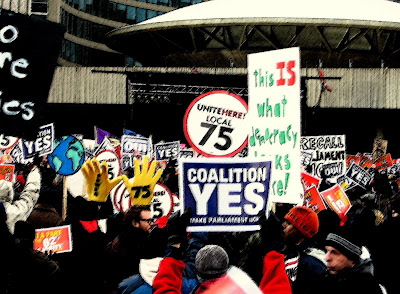 Well you've got to hand it to the Coalition for Change. Never has a political formation been buried by so many people in such a short time. Before it's even dead.

The Conservatives, and their right-wing stooges in the media tried to embalm it alive. And now some Liberals seem to want to put it on ice. Because they claim it doesn't work.

As it stands right now, Canadians hate the idea of a coalition. Canadians are so weary of it, they move to support Harper, despite blaming him for the crisis. I’ve seen a lot of polls, rarely have I seen a batch so decisive in their rejection, and this fact is the bottom line consideration. A coalition simply won’t fly, unless there is public support, if the perceptions are negative, the idea is DOA.

Now I agree the polls were disappointing, except in Quebec, but isn't it time somebody tried to figure out the reasons for that, rather than throwing the baby out with the bath water?

Because here's what I think:

(1) Between the time it was born and the time Parliament shutdown the Coalition had about a week to make its case to Canadians, and that's not enough time to reassure people spooked by an economic crisis.

(2) Canadians didn't like the idea of Stephane Dion steering the Canadian ship into the eye of the storm, and the hideous video the Liberal Party produced made the whole project look amateurish.

(3) The Conservatives unleashed a barrage of radio ads, challenging the right of the Bloc Quebecois to be even a minor partner in a coalition, made it sound like the evil separatists were staging a coup. They ignited a fire storm of anti-Quebec feeling in English Canada. And the Coalition didn't have the money, or the time, to counter that foul propaganda effectively.

Number one and number two are no longer a problem. Dion is gone, the Coalition has enough time to sell its plan, and calm the fears of the population. And an endorsement by the Governor General would be an enormous boost to its legitimacy.

Which leaves us with number three, Stephen Harper's outrageous claim that allowing the Bloc to support a coalition would endanger our country. When in fact it's exactly the opposite.

Because for starters, the Bloc Quebecois can do absolutely nothing to get Quebec out of Canada, while sitting in the Canadian Parliament. That can only be done by the members of the National Assembly, with the consent of the Quebec people.

Two...Quebecers know that, so most don't even think of the Bloc as sovereignists.

The Bloc presents itself as the defender of "Quebec's interests" rather than as the champion of sovereignty, and so Quebeckers see it as a regular party that makes them feel secure, a comfort zone in the alien environment of federal politics. It's their "home team..."

Three the Bloc is a social democratic party that stopped Stephen Harper from getting a majority, to protect the Canadian values we share. And everybody knows that Gilles Duceppe is a decent man. Not a scary separatist. 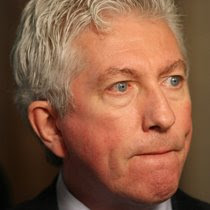 And lastly but most importantly, who gave anyone the right to declare that the representatives of the Quebec people are not equal members of our Canadian Parliament? Or deny federalists the chance to show Quebecers that Canada works when everybody works together.

It's a difficult question because unfortunately anti-Quebec feeling is widespread. But if the Coalition leaders don't have courage to stand up against this hateful nonsense, Harper will always have them where he wants them. The Coalition really will be DOA. And Canada could be torn apart.

My conclusion? The Coalition is not just the best way to govern this country in a time of economic crisis, and the only reason Stephen Harper is cornered and desperate. It's a great way to keep Canada together. And the only way to go.

So I can only urge those who would bury the Coalition baby before it's had a chance to grow, to cool their jets, and stop panicking. And undermining our best chance of bringing down the tyrant we all hate.

Because this baby ain't dead yet.

And you can't kill hope that easily... 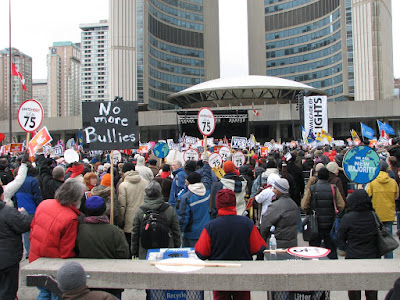 There is another aspect to all this that you've neglected. When the coalition was first formed, it was in response to an obviously inadequate fiscal statement, and only a few weeks after the last election. If they had gone to the GG under those circumstances, chances are she would have granted their request to form a government, and the public would have just learned to accept that.

Fast forward to the end of January. It's now 3 1/2 months since the last election, and the coalition would be going to the GG in response to a budget that they my or may not have read that, on the surface, would give the impression of trying to help the economy.

Under those circumstances, there are better than even odds that the GG would dissolve Parliament and we would have yet another election. And while I believe that Canadians would accept a coalition government as a fait accompli under the right circumstances, I don't believe they would actually vote for one - especially now.

Which would leave us with a Harper majority that might take us a generation to get rid of.

I'm not saying I like it. In fact, a Liberal/NDP coalition is my idea of the perfect government. But I'm not typical, and I suspect neither are you.

Yes, we need to carry on with the PR campaign to educate Canadians about their own democracy and get them used to the idea. That way, the coalition can live on as the Big Hammer that will (hopefully) prevent Stephen Harper from fucking up the country too badly before somebody - anybody - is in a position to take it back from him. Frankly, I don't care if that's the Liberals, the NDP, or some combination of the two.

But when you strike at a king, you must kill him. Dead.

Hi jan....thank you I don't want to criticize the Liberals because to be fair Ignatieff has handled himself well so far.
But they should also look at the politics of the situation. Do they really think that betraying the Coalition in Quebec where it's really popular, will get Quebecers to vote for the Liberals rather than overwhelmingly for the "home team." I don't think so. And then there are those disillusioned Liberals who supported the Coalition? Do they think that quite a few of them might opt for the NDP. I wouldn't be surprised. Bottom line: never mind the cost to the country,there could also be a big political cost. They should tread carefully and lightly...

hi Jennifer...like you I also like the idea of a Liberal/NDP government, and previous polls have shown that Canadians are very favourable to those two parties working together.
But unlike you I believe the Governor General will have no choice but to offer the Coalition a chance to government if the Con government falls.
You see she does NOT consider what's in the budget,that's not her constitutional duty. The only thing she needs to know if the government enjoys the confidence of the House. Period. And don't forget when Parliament resumes it won't have sat for 3 1/2 months it will only have sat for TWO weeks.
So the GG will have every right to offer the Coalition a chance to form a government. Rather than hold an election at a time of crisis. The Coalition can argue that because they would have the votes to not be overthrown at any time, unlike the Cons, they can provide the STABILITY the country needs. And stability is one of the criteria a GG uses. So rather than wait for an election that might or might not get rid of Harper we should at least be ready to form a coalition government because it really is the ONLY way we can kill the king...and quickly without an election... before his political games trigger a fullblown national unity crisis, or lead us to economic disaster..

I don't agree that Iggy has handled this well. He's said he'll consider ripping up a signed agreement and keep Harper in power. Looks pretty untrustworthy to me.

Hi Tiny...actually he hasn't said he'll tear up any agreement. And he certainly hasn't said he'll keep Harper in power. He has said a coalition if necessary, but not necessarily a coalition. But he has also said he is prepared to form a coalition government if the GG goes for it. So I would give him a chance to see what he actually does.I don't expect everyone in a political coalition to agree with each other. What I expect them to do, is put their country before their party at a time of crisis, and act together when the moment comes...