Should the Liberals Form a Coalition with Harper? 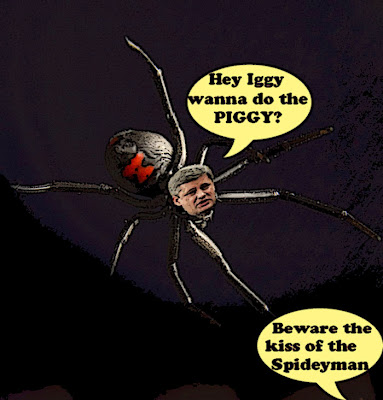 Yikes. It's such a scary image I'm going to have to keep a nightlight burning by my bed. Andrew Coyne's suggestion for a coalition between Harper and Ignatieff.

Well now, it’s been a week since Ignatieff’s—what should we call it? Appointment? Installation? Inevitability?—and what message has he been sending ever since? That he will do everything in his power to ensure the budget is not defeated, the government does not fall, and above all that there is no election.

Moreover, the tripartite coalition that was supposed to be the alternative is clearly dormant, if not expired. Ignatieff hardly bothers even to mention it anymore. He can read the polls, showing upwards of 60 per cent of the public hostile to the coalition taking power—assuming the Governor General were even disposed to call upon it, of which there is some doubt.

Now I'm not going to waste any ammunition shooting holes in Coyne's arguments. He does that himself. Especially since he's been trying to kill the coalition baby from the moment it was born. Any more Con than that and you get to work for the PMO...instead of pretending you're a journalist.

But I will point out that at least he recognizes something that a lot of Liberals don't seem to understand. Stephen Harper wants an election as SOON as he can.

Oh sure he will do what he has to do to win himself a budget vote of confidence, to make sure the Governor General won't ask the Coalition to form a government.

But as soon as that is over he knows that if his government is defeated again...in two weeks or two months... the GG will have no choice but to allow him to call an election. So he can jump on the back of the Liberal Party and suck out its juices and bankrupt it .....before Ignatieff is even confirmed.

And you can be sure that he will find some way to bring down his own government and trigger that election. Because Stephen Harper hates the Liberal Party even MORE than he hates Canada.

Whether they like it or not, the Coalition is the ONLY way the Liberals can avoid an election, before they can rebuild their party.

But Liberals being Liberals they may think they can play footsy with Harper and achieve the same result.

But they'll only end up in his web. Because when Harper sees something as weak and as vulnerable as the Liberal Party, the bully in him wants to KILL it dead. And he knows that he could be just one election away from doing that. But only if he strikes while the Cons are rich and the Liberals are poor. i.e. SOONER rather than later.

Hey c'mon. Everyone wake up and smell the coffee eh? This isn't Disneyland or Iggyland, this is Stephen Harper's Krazy Kanada.

Build up the Coalition, don't keep it on the shelf, or let it wither on the vine. The only reason these Cons hate it so much is because they fear it more than ANYTHING. That's why they attack it like rabid dogs....or mock it....or try to laugh it off.

Be afraid, be very afraid! We here in BC have been trying to survive a Lib/Con coalition for far too long! :-(

And as far as Coyne goes he is a shill for the Cons.
I used to like him but have no respect for him anymore. He's so blatantly pro-Con it turns my stomach. Hope he gets a Senate seat & gets out of the journalism business.

And for the sake of 62% who did not vote for representatives in the Harper government.
When I see the "business elite" the same power brokers being essentially trotted out "to save Canada" (no, it's about saving their neoliberal skins with our money), I know we are doomed by Liberal/Tory same old story meme.
Opening ears, raising hopes ~ NOT.

One needs to ask how many degrees of separation are between the backroom boys of either the Conservative or Liberal parties - enough said.

Face it, the 'coalition' was little more than a pipe dream. The Liberals, led by Mr. Ignatieff, have realized that the way back to power is to return to the center, not turn sharply to the left as Dion stupidly chose to do. If the Liberals do this, they have a chance to woo back some of the votes that went to the Tories in the last few elections. Mind you they still have to lose the reputation of being corrupt and arrogant, but several years have passed since Adscam and the Liberals are sitting in Opposition, not running the show, so they might have a shot at that in the next couple years or so. Expect the Liberals to be back in power between 2013 and 2015, perhaps a bit sooner if Mr. Harper fails to get his majority.

Hi Macadavy...yes I know, I lived in BC for a while, and when it was explained to me that the Liberal Party was really the Conservative Party it just about blew my mind. Can't the REAL Liberal Party sue or something? :)

Hi Penlan...I'm glad you agree with me. It's not as if I'm some sort of political genius but it seems so OBVIOUS.
As for Coyne I also agree...I thought he was an independent thinker but in recent months he's become a complete tool of the Conservative Party.
Him and Duffy deserve each other...

Hi jan....I agree with you there are far too many right-wingers in the upper echelons of the Liberal Party. These fools seem intent on dragging the Party to the right, when if they only took a look at what is happening in the U.S. and Europe they'd realize that they should be going in tghe other direction.
As for that Globe editorial as soon as I got to the part where they called Jimbo Flaherty's Corporate Con panel "refreshing and Obama-like" OMG. I couldn't read anymore... :)

Hi anonymous....I'm with you. I'm willing to give Ignatieff a chance,but if he collaborates with that foul Con government I'll NEVER forgive the Count or the Liberal Party....

Hi Benjamin.... Pipe dream? How about a NIGHTMARE for Harper? One moment he was acting like a dictator, the next moment he was running for cover and pretending he's a Liberal !!!
I think the Coalition has changed the political dynamic in this country forever. I don't think after the way Harper has acted that he will ever get a majority. And even Jeffrey Simpson agrees with me. Yikes. :)
I bet you a timbit that by 2013 Harper will be just a bad memory...

I'll take that bet. Odds are that the Liberals will spend at least the next year trying to avoid an election so that they can rebuild.

Remember, the Liberals are a centrist party, not a left wing party, as much as I like to lump them in with that lot. (If you haven't guessed, my politics happen to be quite different from yours) Those on the left see them as another right wing party. Turning left alienated much of their base support, who were then left with the choice of either supporting the Tories or staying home. To rebuild they have to have policies that will attract those who left them over the last few years back to the fold, as well they have to keep what support they already have. Quite the balancing act.

Hi Benjamin....OK you're on and I'm upping the ante to an apple kruller. :)
Seriously though you're right about the Liberal Party being a centre-left/right party, that campaigns on the left but governs on the right.
And you're also right about that party needing a year to rebuild. But what you and others don't seem to understand is that they won't get that year unless they go the Coalition route and take power WITHOUT an election.Then they get to choose when to call an election not Stephen Harper.
Because I can assure you of something ....Stephen Harper wants an election as soon as he can so he can try to bankrupt the Liberal Party BEFORE it gets a chance to rebuild.
So sooner rather than later he will introduce some bill the Liberals simply can't support. You can count on it. You seem like a reasonable guy....for a member of the Dark Side ....so I think you should take a closer look at Harper, and his motives.
Because he's actually hurting the Conservative Party, and if the decent Conservatives don't rein him in, one day he could destroy your party as well...
BTW that will cost you. Since I don't give free advice to the enemy, when I win our bet I shall now expect you to come up with one apple kruller and TWO Boston cream pies.... :)