Me and the Great Snowmageddon 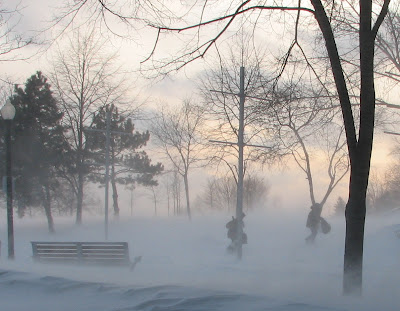 When I heard that a big storm was heading for Toronto my first thought was to leave town as soon as possible.

So nobody could accuse me of being a wimp for living in a place where they call a snow storm snowmageddon.

In Canada. In WINTER.

When of course I'm from Montreal and I LOVE snow storms. I used to love the way they cancelled classes...so I could go snowboarding on Mount Royal. I love falling asleep in a warm bed listening to the snow ploughs go by outside.

I love it because the white stuff makes everything so bright and beautiful. Just like it does here... 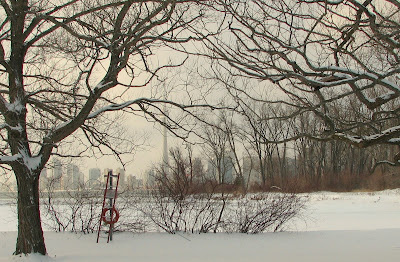 Looking across at the city.

Or down by the frozen canal... 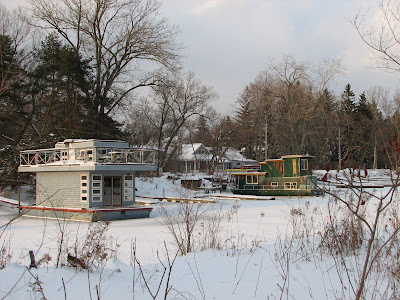 And then there's always the FUN part.

The promise of things to come... 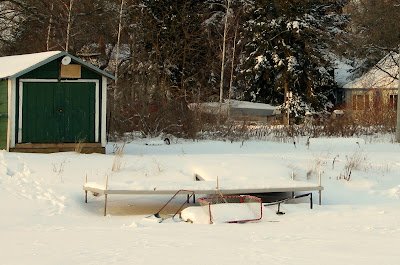 This will soon be a hockey rink believe it or not.

And if I'm not skating, I like playing with the only buddy I know.

Who likes snow even MORE than I do.... 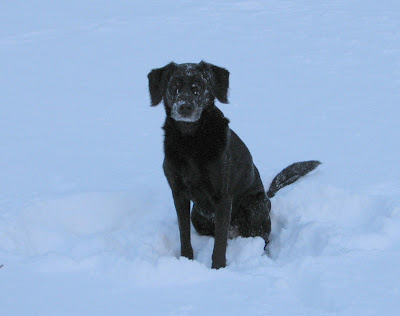 But the white stuff turns him into a puppy again. So how could I not love it? But you know what cheers me up right now?

We're all on the same iceberg.

Hmmmm....reminds me of the Charlebois song Mali Ilse Paquin is talking about here.

In a big sea blue Boeing.


*Sigh* How romantic. Life in the Great White North. You gotta love it eh?

Now get out there and start SHOVELLING everyone!!!!!!

Anyone seen a big blue Boeing ........going to the Caribbean?

Ha! We're having a west coast Snowmageddon out here, and I was saying the same thing today as you, (except with me the destination was Mexico). I was so pissed at the weather, the job, everything, that I said "That's IT! I've HAD IT!! I'm quitting and taking off to Mexico!!! GoodBYE!!!"

It's still snowing and I'm still thinking about it... oh well, Happy Solstice. At least tomorrow the days start getting longer.

And thanks for the pic of Kerouac. He's so cute!!!

We are getting lots of snow as we are in the snow belt of lake Huron and one cannot see tonight, because of all the blowing snow..wild wind!
Merry Christmas Simon.

Some good pics in this post Simon, especially the first one which really shows the madness of the storm, and of course Kerouac - your handsome 13 year old puppy. My dog is the same age and still loves to roll on ice like a pup.

Hi Beijing.... Happy Winter Solstice to you too !!! Just in the nick of time every minute of daylight counts. As for the Gilles Vigneault song I thought of running the video. But the only YouTube version was worse than that Charlebois video.
I'm going to have to make my own version... :)

Hi JJ ....yes I can't believe how wintry it's been in BC. I was enjoying it IMMENSELY... :)
Until I read about the death of that poor homeless woman which was the saddest thing I've read in a long time.
But at least I see that you and your cats are keeping cozy. And let's face it a white christmas with all the coloured lights really is SPECIAL....

Hi Lizt....ooohh yes...I love the howling wind and the snow squalls coming in off the lake.
You know when I was a boy before leaving Scotland to come to Canada I saw the movie Dr Zhivago, and I was fascinated by the scene right near the beginning, when the boy who had just lost his mother stares out the window at the raging snow storm outside....and the wind howls and the icy branch taps against the window. And when I read that the movie had been partly shot in Canada I couldn't wait to come.
And I'm so glad I did. We've got the wildest weather in the world and I LOVE it !!! :)

Hi Jennifer...thanks for the picture. It does look...um...snowy. Although actually for all the hype thee isn't that much snow on the ground. I think it's the wind that's making it so spectacular. Although it's pretty sheltered on the island every now and then a squall blows in from the lake that can take your face off !!!
But I really do love it. AS long as you're sensibly dressed and have good boots it's a HOOT !! :)

Hi sassy...I'm glad you like that first shot....because I almost lost a few fingers taking it. A sudden blast of icy wind kicked up this amazing whiteout just as people were getting off the ferry.
As for Kerouac can you believe that old snow hound. As soon as I let him off the leash he took three big leaps like a deer, and then dived into the snow head first!!!
I'm not surprised your dog likes to roll in the snow too. Those crazy critters. What would we do without them? :)

I love this true winter weather ,too - and yes it reminds me of my childhood in Quebec. I love having to wear extra layers, guarding against frost-bite and all the other stuff that Torontonians can't seem to deal with!