The Knives Come Out for Dion 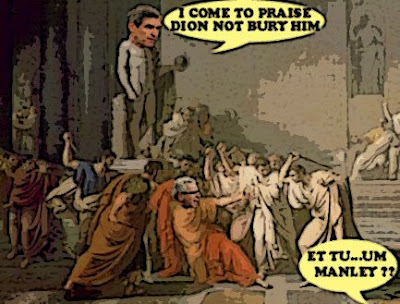 Holy Caesar salad. Call me the soothsayer. I ran this picture MONTHS ago and now look what happened.

As a Liberal, I believe the first step for my party is to replace Stéphane Dion as leader with someone whose first job is to rebuild the Liberal Party, rather than leading a coalition with the NDP.

Now I'm not a Liberal supporter. I'm for the Anyone But Harper Party. And I consider John Manley a Con tool. And I don't like that bit about the coalition. How could every Liberal MP sign a declaration of support for the coalition and then abandon it? It would make them look like FOOLS.

But I'm afraid Stephane Dion does need to go, and the sooner the better. Because anything is better than this Medici-like intrigue.

The plan to get rid of Mr. Dion next Wednesday (just hours before the caucus Christmas party) may or may not be very advanced. It depends on whom you talk to, but there’s now almost unanimous agreement that his election failure and coalition fumbling are sufficient grounds to accelerate his leadership exit.

Gawd. If I went to a Liberal banquet these days I'd sit with my back to the wall and insist on a food taster.

Just like if I was in Count Iggy's castle I'd insist on leaving before midnight.... 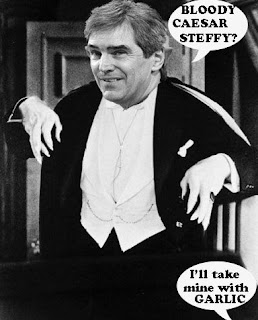 But the fact is we need a strong Liberal leader to help build a strong Coalition for Change, which remains our best chance of getting rid of the fascist Con regime. So I don't care WHO wins as long as the Liberals get their act together.

I feel sorry for Dion. It must be brutal to be humiliated, then have your hopes raised that you might be Prime Minister after all. Only to have them smashed again by the Governor General.... and that wretched tape.

Especially since the tape wasn't his fault.

The grainy video was taped by one of Dion's closest aides, Mick Gzowski, son of late CBC icon Peter Gzowski, The Canadian Press reports. Insiders say it was recorded with a digital camera and an auto-focus button on the camera was broken, stuck in the locked position. As a result, the focus was on a bookcase behind Dion, rather than on the Liberal leader himself, leaving his face slightly fuzzy.

Peter Gzowski's son? A camera that didn't work? What a way to go.

But a cause is more important than any leader. The fight goes on. The Cons MUST be destroyed. Stephane Dion's work to help create a coalition may be his greatest contribution to Canada.

The best thing he can do now to help that cause is step down gracefully....and quickly.

Before they carry him out.... 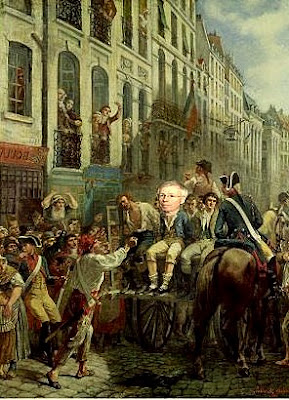 Simon: not sure if the IDEA for the coalition was Dion's. It is my understanding that Jack had more to do with the start of this initiative. Certainly Jack said during the campaign that he was willing to work with the other parties to get progressive legislation passed. Whereas Dion vociferously denied he was willing to work in coalition with the NDP. I will credit him for coming around and getting the caucus on board. I to am worried that the Manley/Iggy blue dog liberals will scuttle this coalition and I am worried that it will allow the Cons to keep power.

I wouldn't be surprised (but would be disappointed) to see the Liberals abstain or vote for the Tory budget come January. Harper will likely give them just enough cover (with stimulus measures) to allow them to vote.

I am an NDP partisan, how do you think the ABC crowd will respond? Will soft liberal progressive voters finally realize that strategically voting liberal only gets them Tories (Harper) or Tory-light (Iggy and the blue dog libs) at best? What are your thoughts?

Hi anonymous...thanks for correcting me on the idea part. I changed it. And like you I'm also worried that the right wingers in the Liberal Party will scuttle the coalition. But I figure why don't they end the uncertainty and then people can put pressure on the leader to stay the course.
Because I really believe the GG will offer the Coalition a chance to govern if the Cons are defeated.
If the Liberals do prop up the Tories I'll never forgive them, I'll fight them until the day I die...and I'll probably officially join the NDP....or the Bloc Quebecois... :)