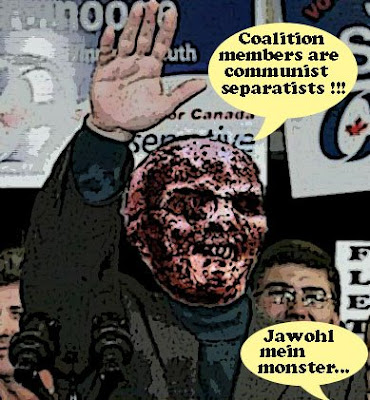 OMG.I see that Great ,, , Monster Leader has finally gone off the deep end.

Now he's not just threatening to murder democracy, destroy government, stamp out women's rights, and bankrupt the country AND the Liberal Party.

Now this foaming, hissing, Alberta Uber Alles neocon nut is calling members of the coalition separatists and traitors. Whipping up hatred against Quebec. And making an absolute fascist fool of himself.

During question period, Harper also accused Dion, NDP Leader Jack Layton and Bloc Leader Gilles Duceppe of deliberately avoiding being photographed in front of a Canadian flag during Monday's signing ceremony of the agreement between the parties.

Video and photographs of the event, however, clearly showed at least two Canadian flags behind the three leaders, as well as a painting of the Fathers of Confederation.

Kookamunga. Big Banana. May the Monkey God save us. I'm afraid the cornered monster is so crazed with fear if he can't waterboard the Governor General into shutting down Parliament.

He may BURN it down. Like his fellow fascists torched the Reichstag.

Because believe me, I've studied him like a bug for years, and when Great Psycho Leader goes completely wacky wacko he's capable of ANYTHING.

Starting with the time when he resigned as the Reform Party's Policy Chief in 1992 after squabbling with Preston Manning. And going nutso because nobody would listen to him. Returned to Alberta in a deep dark funk, broke up with his girl friend, went even nuttier, and joined a Jumping Jesus Doomsday Church. 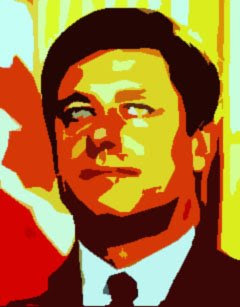 So you can imagine what trouble we're in. Now that this monster is so crazed he is willing to pit Canadian against Canadian, and destroy the country to save himself.

But luckily, although these foul fascist Cons have the money and the lying radio ads, we are more and better than them, and we all we need to do is get out this simple message. By whatever means necessary:

(1) The Coalition has every right to form a government because we don't have a Presidential system like these yankee stooge Bush Cons seem to believe. We have a Parliamentary system.

Our system of government, known as “responsible government”, holds that for a ministry to hold office it must enjoy the confidence of the House of Commons, i.e. the support of the majority of the members of the House.

And a coalition would be more stable than a Con government that could be toppled at any time.

(2) The Con regime's decision to put ideology before the real needs of Canadians could make the effects of a recession even more devastating.

(3) By trying to kill democracy, suppress women's rights, ban the right to strike for millions of Canadians, and by secretly recording another political party's meeting, these disturbing sleazy RepubliCons have demonstrated once and for all that they can't be TRUSTED.

And lastly, but most importantly, Canadians need to get rid of this rabidly partisan thug of a Prime Minister before he torches our country. It's that simple.

Defeat him. Crush him like a bug. For the sake of our beautiful Canada.

For the sake of all Canadians alive today, and those about to be born.

Finish this monster off. And lock him up in an insane asylum.

He really seems to be losing it. The calm, stoic veneer is completely gone. Even Bush doesn't go publicly ballistic.

I've been following this from day 1, and honestly yesterday I thought we'd win it. Now I'm not so sure. The mostrosity of the Conservative PR machine, the lies Harper is willing to sprout is frankly... frightening. In question period today he declared the Liberals were getting in bed with the separatists in English, then reversed it and said the Separatists were getting in bed with the architect of the Clarity Act in French. He's trying to tear the country apart. I really don't know if we're going to win this, and if we don't win at this crucial moment when everybody is watching, I don't know if the Liberals will ever recover. Admit it, if an election were called today, the Liberals would lose for sure.

Harper lost it a little, yes, I think he was letting out steam. But he was also gaoding Stephane Dion, and quite effectively too. I've never seen Dion so pissed off. In my opinion, he should have tried to act statesman-like, and somehow ignored the lies and get the Coalition economic message across rather than try to prove him wrong.

Ok, since I started it here, I think I'm going to vent some more. Even if the Coalition succeeds in forming government, they'll be starting at an incredible disadvantage for lack of legitimacy (if only due the Conservative PR machine), one that may be insurmountable. Most of the public are aware only of the significant events - like crisis, changes in government, unity issues - for the rest of the time they don't really pay attention. What I'm saying is, if they lose this PR battle now, their chance at winning the war in the long run will be very slim. And maybe the Conservative PR machine is getting to me too, because articles like these are ominous:

While I know Stephane dion would never sell us to the "separatists" (yes, I will use that term, like I said the conservative PR is getting at me, lol), who is to say his successor in the liberal race won't? I strongly opposed Ignatieff's "Nations" recognization of Quebec, what else will he be willing to concede?

Anyone who claims that a coalition government is undemocratic or worse needs to go back to high school social studies and learn about the parliamentary system.

The poll numbers AND the seat count in Parliament don't lie--a majority of us did NOT vote for this fundie-fascist freak scene. There is a 91-year-old LEGAL precedent for the coalition, and what's more, there's also a parliamentary AND an electoral mandate. If Harpo is unhinged, and the evidence is solid that he IS, then it's time to remove him and let the grown-ups take over. This neo-theo-con farce has gone far enough.

BTW, Dion was right to get angry. Such accusations as Harpo made are outrageous. Glad to see that Mr. Mild Manners has his gonads well placed after all.

Hi Beijing ...I've never seen such a rabid performance by any Canadian politician in my life. The man is clearly disturbed and dangerous and beeds to be retired from public life....

hi Kelvin...you sound like a good guy but really have a bit more confidence in the strength of our cause. Yes the Con machine is a frighteningly powerful one...but it can only do so much. You know what they say shite in shite out. I think you underestimate the depth of the anti-Harper feeling out there. This latest outrageous performance will only strengthen. By now most Canadians must realize that Great Monster Leader is missing a screw or two.
Also remember that polls show that Canadians are usually quite favourable to the idea of an NDP/Lib alliance working together for the good of Canada.
As for that separatist nonsense don't worry about it. Most Quebecers and many Canadians don't see the Bloc as a threat, and many English Canadians admire Gilles Duceppe...and quite a few would vote for him if they could.
The facts remain Harper has poisoned the political scene and lost the confidence of the House of Commons, and by the rules of our system the Coalition has every right to topple him, and provide Canada with some badly needed stabilty. A government that can stay in power as opposed to one that could fall any day.
So cheer up my friend. Have a bit more faith. Things aren't as gloomy as you think they are... :)

Hi Mark...is distressing isn't it? We are so saturated with American culture we don't even know how our own government works. And of course Harper has encouraged that by pretending he's a President. It's PATHETIC....

Hi Bina...I agree with you that it was good to see Dion angry for a change. Since he has been portrayed as a wimp for so long I like it when he tells the foul bully EXACTLY how he feels... :)