Stephen Harper and the Political Pazuzu 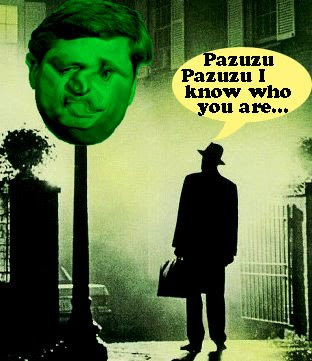 I've been tracking Stephen Harper's career for so long I sometimes feel like the old priest in The Exorcist.

I still remember the fatal day my political science professor suggested I might want to do a project on this new rising star in the West. Just like I remember the dark and stormy night when as I read through a pile of musty clippings in the library, a cold shiver went down my back.

Because it suddenly hit me like a bolt out of Hell that this was no redneck Messiah. This was Canada's political Pazuzu.

And if left unchecked or allowed to have too much power he could tear this country apart.

Since that time I've tried to warn people. I've written more posts about Harper than I can count. I pointed out that the writing was ALWAYS on the wall.

That there was something not quite right about a weird teenager who tried to destroy the Student Council in both high school AND university. Just like there is something definitely wrong with a leader who needs to destroy institutions and political opponents in order to feel good. Because he just can't help himself.

In a desperate attempt to get Canadians to pay attention I started calling him a MONSTER. But my friends just laughed.This is Canada not Transylvania. Don't exaggerate eh? Muahahaha.

Yeah right. And now it's almost too late.

The monster is running wild. Our Parliament is padlocked. Canadian democracy is lying on the floor in a pool of blood. English Canada is being barraged with radio ads whipping up hatred against Quebec. Because this wretched Con and his satanic spawn, know they can ride that hellish hound all the way to a majority.

Why do you think his numbers jumped so much in such a short time....everywhere except in Quebec? Huh? Which after stopping Stephen Harper from getting a majority now stands isolated and alone.

I must admit I'm stunned. But now at least there is some vindication.

"He just can't help himself.""The people around him, the stable, has generally been bred for obedience, so that's what you get," says a confrere.....Another insider agrees "there's no question the Prime Minister rules by fear..."

Sources say Harper was visibly shaken earlier in the week, angrily flouncing around his Langevin Block office, eyes reddened and battling a bad cold exacerbated by a lack of sleep."He is a yeller and certainly longshoremen could take language lessons from him. The backrooms are blue but it's not cigar smoke; it's four-letter words."

He. Just. Can't. Help. Himself. Just like the Pazuzu can't. All he knows is pain and destruction and fear...and how much he LOVES it

Last week, a bureaucrat with close ties to the PMO, said Mr. Harper has told colleagues, “When I'm hiring someone, I want to see fear in their eyes.”.

Now remember that Stephen Harper is an avid student of Stalin. Which should have been a warning in itself. 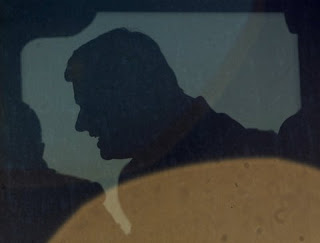 If Canadians still can't see the danger, I give up. Ignorance is one thing, stupidity is another. You can't fight that.

Except to say once again, it's time to put dirty, cheap, absurd, goombah partisan politics aside,and support the Coalition for Change which is Canada's only hope, the only light in the darkness.

Defeat him at the first strategic opportunity. Crush him. Send this crazed political Pazuzu back to the hellish place in Alberta he came from.

Labels: Stephen Harper, The Coalition for Change, the end of Canada

As for Manley, and Ignatieff by extension, your traitorous performances are not appreciated.

Well I'm not sure it's stupidity more than some form of apathy. Certainly there is ignorance, as illustrated by all that Quebec bashing some people are doing while they know nothing at all about the Belle Province.

Also, I think there's some rampant form of authoritarianism in our societies. Some people prefer a ruthless a*****e who brings the worst changes than someone who prefers to negotiate. Generally such a person is seen as weak (and the media do present things as such).

Still, we have to keep on fighting...

it's all about illusion and harper has been the master of the three parties. so now we await the illusion of the coalition to gel and meantime ALL are scrambling for some solid ground.

well, solid ground doesn't exist if you don't have your roots in Mother Earth. Canada can try as it may but perhaps it crumbling and a serious move to sustainable governance will only happen once the dark has reached it's apex.

really, there's nothing new going on here, nothing. i support a canada that moves closer and closer to 'you know what'....the iroquois constitution. canada can only get there by following the u.n.'s agenda 21 on susatinability.

so, while i do cheer the coalition on, i also forsee much of the same old same old, and can't wait until that gets buried six feet under.

hi Beijing....thank you...anytime I can warn the public about that dangerous Pazuzu I'm happy. Because he is dangerous and his divide and conquer strategy could destroy the country.
As for Manley and Ignatieff I don't know why they think they have to drag the Liberal Party to the right, when if you take a look what's happening in America and Europe, the current of history is flowing in the opposite direction. The right is DYING and not a moment too soon...

Hi enkidu's palace...it's probably a combination of both. As I've said before while Quebecers were able to move on after the referendum, a lot of English Canadians who didn't understand what was going on, simply gave up trying to understand....and retreated into hostility. But you know it's been thirteen years since the last referendum so it really is time to move on and grow. As far as I can see Quebec isn't about to walk away and plunk itself down next to Louisiana ...although I wouldn't complain :)
And the rest of Canada isn't going anywhere either, so it's time to stop the yapping and learn to live together...

Hi Scout....gawd you are gloomy these days. :)
I thought I was the glum one. You know the funny thing is that I'm frequently accused of being cynical...although I like to think I'm full of hope about everything. It used to bother me until I read somewhere that cynics are just disappointed idealists. So now I feel BETTER... :)