The Canadian Blog Awards and Me 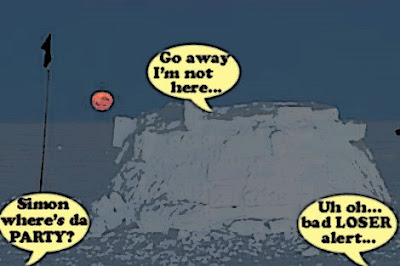 Well I managed to cram fifty four bottles of beer, six big bottles of vodka, and a mickey of rum, into my igloo in preparation for the Big Party.

The humungous bash and drunkathon that was supposed to celebrate my night of glory at the Canadian Blog Awards.

In fact I was so confident I would be crowned Gay Blogger of the Year, I had even designed a simple but stylish..... and tres gay crown. 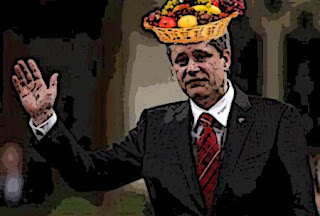 You know the mad King of the Canadian Banana Republic. The democracy without a Parliament.

But alas, all my party plans and my dreams of blogging glory came crashing down, when due to unforseen circumstances.....or some dreadful mistake.....the party had to be cancelled.

And I was forced to drink all the booze myself. *sob* *hic*

Seriously though, I just want to say I'm honoured by the award I received, I'm grateful to those who voted for me, and I think the organizers deserve a big pat on the back for all their hard work.

Now I don't think the CBA voting system works, since it's clearly open to manipulation. It should be replaced by a jury system.

But I do want to say that I am extremely happy that my buddy Mark won, because he's not just a nice guy, he's BRILLIANT and he deserves it.

And furthermore I wish to state that despite the grinding humiliation of getting only twelve more votes than Uncle Fred at Gay and Right *gasp* I intend to keep on blogging. Because as the great blogger James Bow wrote recently, it has been quite a journey.

I’ve noticed a change in Simon’s writing since he came into the blogosphere a couple of years ago. When he emerged, he startled a number of us with the depth of his passion, speaking of his painful experiences dealing with bullying and homophobia. Today… well, I would hardly say that he has mellowed, so while he continues to advocate passionately for what he believes in, and gives no quarter to those people espousing views he disagrees with, I sense that he is more at home with himself. It’s hard to put my finger on it. But I’m reading a blog where, if I may be so bold as to say, someone is getting happier.

And because the guy most responsible for the happy part, gave me a brand new laptop today to replace the one that has been dying on me.

Along with a little note...in French: "To my favourite blogger...as long as he's happy I am. Love Sébastien."

What more can I ask for eh? My friend wins the big award. I get this one...

Along with a good review from James Bow, and a laptop and a special note from my favourite guy.

Is it any wonder I LOVE blogging?

Who needs next year eh?

Congratulations on an all round very good day Simon. :)

It's nice to know that you're going to keep on bloggin', 'cause I'll keep on readin'!

Congrats Simon! Wear that 3rd Prize in your sidebar with pride! And keep bloggin'!

Congrats Simon, you are hands down the best LGBT blogger and hold wingnut feet to the fire like no other. You have a unique way of making them look stupid without even trying. Love it.

Ehn, he'll be the bestest libbertygibbet blogger when he figures out how to clone the eminent Sebastien, or bottle him, or just teach the rest of the potential partners in the world to be like that.

Hi everyone...and thank you for your kind comments. I have mixed feelings about these awards. On the one hand they're good to introduce people to new blogs, and celebrate our Canadian blogosphere. But I'm not sure what they really mean. I look at the results in the different categories and I wonder whether they celebrate blogging excellence or who has more friends on the social networking sites...who don't even read blogs...or more access to more computers. I would much prefer a jury system. But I recognize it's easier this way.
As for me I'm glad that Mark won because he IS excellent, and he richly deserves it, and in my opinion should have won last year as well.
But I have to admit I would have liked to get a few more votes...say enough for second place.. :)
But what can you do? I'm sort of caught in the middle because I don't just blog about gay subjects. If you're too gay straight bloggers don't take you seriously and if you're not gay enough gay people don't like you either.
But I'll probably keep on blogging because I like it and I want to try new things.
And Niles...as for Sebastien...the laptop is my Christmas present...a few days early. But good timing eh? :)

Thanks, Simon! Though I completely agree that the whole voting system isn't at all an accurate way to determining what is the "best" blog. (Not that I'm complaining about my placing, mind you. ;-)

Either way, congratulations on making the top three! I wish you were in the final running for more categories; non-partisan, progressive, etc. I guess I'll have to nominate you myself next year!

Hi Mark !!!! Congratulations champ. As I said in my post you richly deserve it. You are truly a creative talent and a super fighter for the gay cause.
Even if there was a jury system you STILL woulda won.
I just would have liked to come second, you know a respectable distance ahead of Gay and Right :)
As for competing in any other other category I wouldn't have a chance even if I was really good...which I'm not. I don't think a "gay blogger" can ever hope to be taken seriously by the political poobahs of our blogosphere.It's just the way it is. But who cares? I don't. I'm just happy you won Mark, and I'll be toasting your victory as soon as I find some more booze!!! :)

Congratulations Simon (and Mark) on your well deserved honours.

I definitely concur that there are some shortfalls to how the awards are run. When JJ is denied a feminist nod while someone blogging for childcare choice (a title straight from Harper's 2006 campaign talking points) is included just makes no sense.

Another great result is that CalgaryGrit usurped SDA for top prize in political blogging :-) I can just picture the outrage among the flying monkeys.

Pffffft. You don't need a cartoon beaver from a popularity/freeper fest to tell me that you're the BEST! MWAH!