Lesbian Assault Not a Hate Crime. 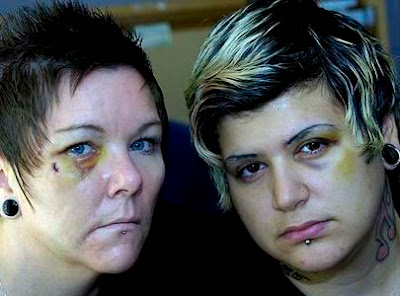 I must say I find this story hard to believe.

A man charged with assaulting two lesbians outside an Oshawa school will not be charged with a hate crime, despite pressure from community agencies.

Police said although the attack was disturbing and offensive, it did not meet the narrow definition of a hate crime. Specifically, the attack did not advocate genocide and there was no clear evidence the man incited others to join him in the attack.

Oh great. Let me get this straight. A 250-lb man attacks two mothers in front of their kid, and leaves them bloody...after insulting them because of who they are.

The accused, a 43-year-old man, is reported to have used the words "dyke" and "lesbian".

But because he didn't advocate the killing of ALL gays, and acted alone, it's not considered a hate crime. Even though homophobic violence is a real problem in Canada.

A 2004 study by the Canadian Centre for Justice Statistics found that lesbians and gays are two-and-a-half times more likely to experience violence than non-gays.

What's wrong with this picture?

The so-called Free Speechers want the freedom to whip up hatred against gays and lesbians, and are always claiming that there are hate crime laws to protect the victims of the violence they engender.

But if you were a lesbian, or a gay man, or a member of any other vulnerable minority, would you think those laws are protecting you?

Not a hate crime?

Jesus jumping Christ on a pogo stick, what does it take for something so obvious to sink in for what it really is?

Pardon me while I go vomit in a corner.

holy crap, this is crazy! thanks for posting about it... i'm sending the article to my local queer listserve.

Forgive me for saying this, but I think judges are often so specialized in law only that they are, in the words of Edgar Morin, super-idiots who cannot make sense of the most basic things. Although in this case, I would not rule out prejudice from that judge.

One thing I don't understand, Shouldn't this guy at least be charged with aggravated assault? If he has not been, this would such a blatant miscarriage of justice that they should appeal in court (and this judge should be disbarred too).

Is the situation as dire in Quebec as in the other provinces? Is there as much violence towards gay people?

I remember when I first heard about this-not in the MSM,but on a blog! In fact,it seemed to get very little coverage beyond the local paper.If this brutal,disgusting assault is not a hate crime-then what is?!

With respect, you may be confusing two things.

There is a "hate crime," and there is taking hatred into account during the sentencing phase. These are distinct.

The definition of a hate crime under the CCC really does require advocacy. But the application of the following section is still up in the air, and will be until or unless the man accused is found guilty of assault.

718.2 A court that imposes a sentence shall also take into consideration the following principles:

(a) a sentence should be increased or reduced to account for any relevant aggravating or mitigating circumstances relating to the offence or the offender, and, without limiting the generality of the foregoing,

(i) evidence that the offence was motivated by bias, prejudice or hate based on race, national or ethnic origin, language, colour, religion, sex, age, mental or physical disability, sexual orientation, or any other similar factor,

shall be deemed to be aggravating circumstances;

In other words, hold your outrage until we have a guilty verdict and a sentence--if the sentence doesn't take the foregoing into account, we should head into the streets, but not until.

Hi Everyone...Dr Dawg makes an excellent point.In my anger over this cowardly act that makes my blood boil, I went charging off in the wrong direction. I mixed up two differnt questions, forgetting that the hate crime part only comes into play at the trial and during the sentencing. The thing I wonder about is whether it would be a good thing to mention right off the bat that the crown will seek an additional punishment because it believes the assault was caused by hate. Because it's important to publicize these types of crimes so the extra punishment can act as a more effective deterrent. Especially since police have a long record of not taking thse kinds of crimes against women and gays seriously.
Enkidu's Palace...the aggravated assault provides four more years as a penalty than assault with bodily harm but is usually used when some kind of weapon is involved. And ten years would be good enough. :) One thing is for sure I'll be watching this trial closely...

..what does it take for something so obvious to sink in for what it really is?

When someone is killed.