Stephen Harper, the Frog, and the Scorpion 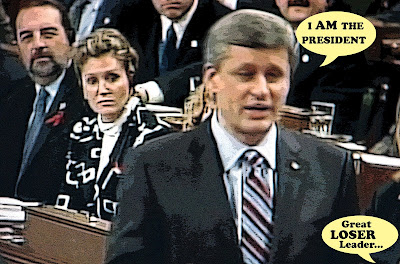 When I watched Stephen Harper during Question Period today I almost felt sorry for him. He just looked so BEATEN.

At one point he was so out of it he called the Speaker first Mr Prime Minister, and then Mr President.

And besides when columnists start comparing him to these three losers.

It is how he will go down as Prime Minister that puzzles at the moment, as this past week he has resembled some bizarre amalgamation of former prime minister Joe Clark, former U.S. president Richard Nixon and, unbelievably, former Roman emperor Nero.

But then I remembered he's not just a pathetic LOSER. Who played dirty politics while Canada burned. He's a nasty cruel monster.

Last week, a bureaucrat with close ties to the PMO, said Mr. Harper has told colleagues, “When I'm hiring someone, I want to see fear in their eyes.”

As well as a liar, a cheater, a misogynist, a homophobe...who couldn't even wear an AIDS ribbon today on World AIDS Day.

And of course almost certainly a psychopath.

And then all I could think of was how lucky we are to have a beautiful Canadian Coalition. 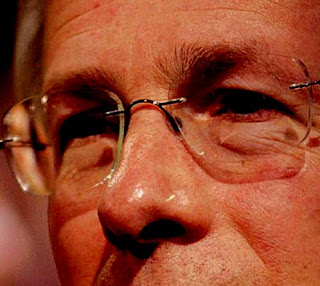 Stephane Dion may not be the best politician in the world. And because of that the dirty Cons subjected him to the foulest personal attacks a Canadian political leader has ever had to endure.

But as they say what doesn't destroy you makes you stronger. And Dion is what Harper could NEVER be; a kind, decent human being and a proud Canadian who believes in our humble but beautiful Canadian values.

And that's MORE than good enough for me.

So all I ask of him and the other members of the Canadian Coalition is that they not let that decency get in the way of striking down the monster....of doing what needs to be done.

Because a monster can't change its cruel evil ways. Just ask the frog and the scorpion.

"You fool!" croaked the frog, "Now we shall both die! Why on earth did you do that?"

The scorpion shrugged, and did a little jig on the drownings frog's back.

"I could not help myself. It is my nature."

Defeat him. Crush him.

Simon, I too am thrilled that a decent, hard working person like Dion will finally be vindicated. (At least I hope so -- I don't want to jinx this coalition movement.)

But what has amazed me most is how on point the members of the opposition have been. Never once has anyone taken a nasty personal shot at Harper. They just keep repeating that he failed to provide an economic stimulus plan that is what the current economic tail spin demands.

They didn't get distracted by Harpers feeble ploys to paint them as greedy party hacks concerned about their election subsidies or dishonest, conniving undemocratic enemies hell bent to assume power.

They took the high road and stayed on message. And they played the media game with aplomb -- keeping them busy with all the great strides they made, including recruiting well respected politician with strong fiscal records to form an advisory committee.

I have newfound respect for these coalition politicians. Never have I seen them perform so well. Bravo!

Hi Beijing ...yes I must say I have been impressed too.The Cons seem to be praying for splits or disagreements but so far so good.
As long as they can remain disciplined, and they can reassure Canadians that they can provide the stability the Cons can't everything should be OK.
But like you I'm holding my breath... :)