The Vatican and the Twelve Gays of Xmas 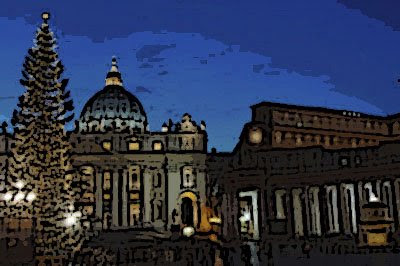 Well the purple ones at the Vatican will soon be putting up their giant Christmas tree.

And while they're busy hanging big gold balls from strings and branches.

I see they're encouraging other people in other countries to get into the spirit of the season.

By hanging gays from ropes and scaffolds. 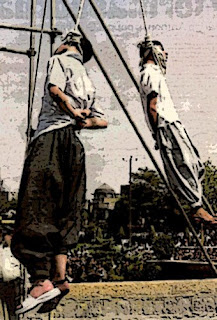 "The Vatican has come out against a United Nations resolution that calls on all governments to decriminalize homosexuality.

The resolution, Archbishop Celestino Migliore said, would "add new categories of those protected from discrimination" and could lead to the decline of heterosexual marriage.

Homosexuality is still punishable in at least 85 countries, including Afghanistan, Iran, Sudan, and Ghana. Some countries kill those who are found guilty of such an offense.

How low can can these creepy old men in dresses go? How much more can they pervert their faith?

Can't they see that all that crazy nonsense just stirs up blind hatred against gay people. So they can be murdered by states or homophobic mobs for just being who they are.

Or attacked for just singing a Christmas carol.

Oh boy. It's so easy to get angry.

But hey I figure what really pisses these bigots off is that we're here, we're proud, we're not going anywhere, we never stop fighting, and we're so alive we're BRILLIANT.

So in the spirit of the season I like to dedicate this little number to the nasty old bigots in the Vatican....

They can insult us, hurt us, and kill us. But can they ever defeat our freedom struggle?

With our gay spirit..... and the way we can dance? Are you kidding?

Yeah, screw the whole notion of universal human rights. If the gays get 'em, the Vatican will be in trouble--because once the closet is used only for clothes, where will they get "celibate" priests?

On the other hand, Hitlerjugend-Ratzi is the sort of vampire whom no one would want to claim. Especially the gays.

Hi Bina...you're right we DON'T accept Radzi. After fifty years of being a closet queen you're stripped of your membership in the Gay Club.
And as you point out these old queens are crazy. First they got empty churches soon they'll have no priests....

Hi Sassy...well that was short and sweet. :)
But yeah. I used to get really mad at them but now I just shake my head.
I can't imagine what life must be like when your heart is so dark, and your head is so full of shite...