Why Should that Iraqi Journalist have all the Fun? 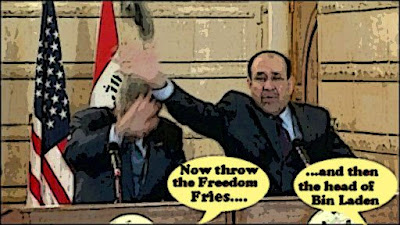 When you can throw a shoe at Chimp Bush yourself.

Or a pretzel, or a tomato, or the Bill of Rights.

It seems it's a phenomenom.

Oh goody. The Chimp must HATE it. Those flying shoes must haunt him. It must be awful to look out at the ruins of your country, see your Presidency going down in flames, and hear the whole world LAUGHING.

As I said before..... the monster got off lightly. But history will be brutal.

I now know, you are no longer in Montreal but I thought you might enjoy hearing about some excellent protest actions going on in your hometown.

"This is a farewell kiss, you dog!"
MONTREAL SHOE ACTION
In solidarity with Muntadar al-Zeidi
Bush out of Baghdad ... Canada out of Kandahar!

SATURDAY, DECEMBER 20 at 1pm
outside the US Consulate in Montreal
(1155 St-Alexandre, métro McGill)

We strongly encourage all journalists to join us in this action and to
throw their own shoes.

After our action at the US Consulate, we will march west along
Ste-Catherine Street to Bishop Street and the Canadian Armed Forces
Recruiting Station, where our shoe action will continue.

Along with tens of millions around the world, we celebrate the recent
action of Iraqi journalist Muntadar al-Zeidi who hurled two shoes at
US President George Bush while shouting, "This is a farewell kiss, you
dog! This is from the widows, the orphans, and those who were killed
in Iraq."

We support the calls for al-Zeidi's immediate release from detention,
and denounce his abuse while in custody. And, in a simple gesture of
solidarity by local anti-war activists and independent media
journalists, we will gather outside the US consulate to hurl shoes in
continued opposition to the US occupation of Iraq, as well as the
already announced escalation of the US military occupation of
Afghanistan by the incoming Obama administration (a continuation of
"Operation Enduring Freedom", launched by George Bush after September
11, 2001).

We also continue to oppose Canada's complicity with the US-led "War on
Terror", with the Canadian Armed Forces' military presence in
Afghanistan. More Canadian troops in Afghanistan has effectively meant
that more American troops have been available to occupy Iraq.

Unfortunately, the fun Mr al-Zeidi had in throwing his shoes to the Chimp has been followed by less pleasant things.

Funny how one gets punished for doing what everyone wants to. I guess it shows where the power lies.

Hi Beijing...OMG...that'll be something to see.

Although I'm not sure it will be this good:

"We strongly encourage all journalists to join us in this action and to
throw their own shoes."

Hi Enkidu's Palace...yes I know he has been badly treated in prison. And I really should have mentioned that. But because he's the hero of so many Iraqis at least they won't dare kill him.
And when the Americans leave he'll either get his own paper...or run the BIGGEST shoe store in Baghdad... :)