An Open Letter to Michaëlle Jean 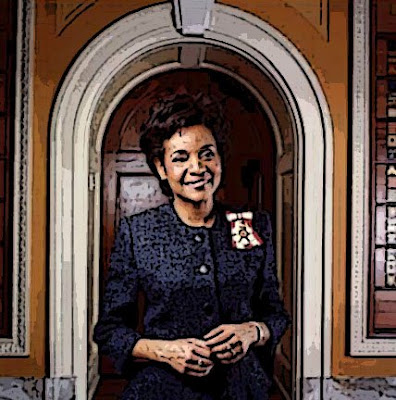 I understand that you are cutting short your trip to Europe.

And I hope your flight is a smooth one, because as soon as you step off the plane you are going to have to tighten the seatbelt on your throne. And make the most important decisions of your life.

The first decision will be whether to allow Stephen Harper, the brutish Con bully, to prorogue Parliament. And it should be an EASY one.

To allow this Con fiend to shutdown Parliament, and silence the opposition during a time of crisis, would be an assault on democracy. Especially since this crisis was sparked by Stephen Harper's disturbing plans to KILL democracy in Canada.

So you must say no or be considered nothing less than an ACCOMPLICE.

The second decision will come when the Canadian Coalition defeats the government in a vote on a so-called economic statement that had nothing to do with taking steps to save millions of Canadians from the effects of a brutal recession. And everything to do with KILLING the power of government.

A so-called economic statement that was nothing more than a homicidal assault on the other political parties, an attempt to deny pay equity to women, and remove the right to strike from millions of Canadian workers. In short nothing less than a fascist coup.

In this regard you have TWO choices :

(1) You can dissolve Parliament and allow Stephen Harper to call an election that nobody wants so soon after the other one. An election that would cost more than $300 million dollars that should be reserved to help suffering Canadians. And would cause more political instability and leave the country rudderless in a time of crisis.

(2) You can allow the Canadian Coalition to form a new government. A government that will be ready to govern right away, and tackle the real problems facing Canada, instead of playing cheap political games. A government that is backed by some of the most respected political figures and economists in the country.

A coalition that is also supported by an overwhelming MAJORITY of Canadians, who after years of being tormented by Harper's anti-Canadian Republican style government are demanding their country back.

By supporting their right to form a government you would not only be siding with all these Canadians, you would also be upholding the traditions of our Parliamentary system.

And standing up for democracy instead of helping to stifle or KILL it.

Because let's be clear, if you side with those who would turn our government into a U.S.-style Presidential system, you would be dealing a fatal blow to the very system that keeps you on your throne.

It's not an easy decision, and I don't envy you. But your appointment made history and made me proud to be a Canadian, so at this critical point I am confident you can make history again, and allow true democracy to prevail.

If on the other hand you don't do that, and side with these fascist Cons, you will be condemning millions of Canadians to lives of misery, deal a fatal blow to women's rights and Parliamentary democracy, and be seen as nothing more than a Con STOOGE.

And let me assure you Canadians and history will NEVER forgive you.

Please do the RIGHT thing. I know you can.

Your not so humble servant.

One of Kady O'Malley's commentors research on what a GG should consider got pushed up as a Kady column. It might deserve a link to your letter. Really lays out a Parliamentary style understanding.

Hi Niles...thanks for that tip. I just included it..

Agree with everything, but the G.G. is properly addressed as 'Excellency'.

I'm interested in knowing if the G-G has the right to not reply immediately to a request to prorogue. Can she say: "Let me think about it and get back to you next week."? Oh, was there a non-confidence vote in the meantime? ...oh, well how about that!

On the EnMasse discussion board one contributor came up with a great slogan:

If she were to try a move like that Scott, Harper could potentially have her removed before she could make a decision, as described by Andrew Steele in the Globe and Mail.

Michaelle Jean herself is vulnerable to Harper, you know. I think she's too intelligent to pull a move like that even if it were possible.

Hi anonymous....uh oh...I knew something was MISSING. But I thought it was Your Lordy Lordy Ladyness. It's not a beheading offence is it? ;)

Hi Beijing....Pro-Rogue and Pro-Democracy I love it !!! The Cons are wailing that it's a coup d'etat and that they're being ROBBED.WAAAAAH !!!
But actually it is they who are thwarting the democracy, and are hijacking Parliament. And robbing the majority of Canadians of the joy of seeing Stephen Harper trying to bite his way out of a garbage can.
Don't worry their time will come...

Hi Kelvin...you're right I rectly found that out too. Can you believe it? The Prime Minister can fire the GG like a maid. Is this a modern democracy or the Prisoner of Zenda?
Seriously though I don't envy the poor woman. I'm sure she hates Stephen Harper with every bone in her body, but I'm afraid she may take the easy way out and allow Harper to call an election...

Hi Scott...hmmmm....crafty. Or maybe she could say she's developed a nasty cold and she needs to take to her Royal bed for a few days...and unfortunately is unable to speak...temporarily deaf...and will not be welcoming visitors until she is fully recovered.i.e. until AFTER the government falls. :)

Delay the pro-rogue (rogue ELEPHANT???) until the non-con (!) vote goes through? Oooooooo, I like that idea. So very parliamentary! Mwahahahahahaha.