Michael Ignatieff and the Coalition 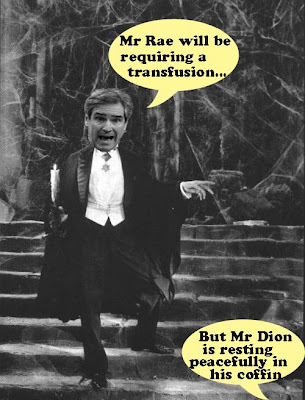 I see the clock has struck twelve in the Liberal castle, and Michael Ignatieff has made his move.

And I for one am delighted. Oh I know...I expect to be criticized by some of my best friends...including my companion. And as I've said before I wouldn't hang around Iggy's castle after midnight.

But my position is that one can hardly be squeamish at a time like this. If the Count has the sharpest fangs, and he's willing to stick them into Stephen Harper's neck, who am I to complain? All I care about is toppling Great Ugly Leader's government as soon as possible.

And if we're going to do that the Liberal Party needs a strong interim leader, and so does the Coalition. And the sooner the better.

Because if we don't have that leader in place by early rather than late January, the Coalition could lose its best chance to dethrone Stephen Harper at a time of national emergency. And Michael Ignatieff will lose his best chance of becoming Prime Minister...without an election his party can't afford.

By missing out on what could be an historic opportunity.

So here's what I think Michaelle Jean must have said last Thursday: Mr Harper, I will take your advice and prorogue Parliament. But if you lose a confidence vote in the House early next year, don't expect me to dissolve the House. You can't have an election until it is clear that a Government cannot be formed.

I also believe that with every bone in my body. I believe the Governor General is deeply distressed by the Con threats to go over the heads of Parliament and her own, and by the way they are threatening national unity. I believe she would LOVE to give the coalition a chance to govern. But for that to happen the coalition must demonstrate that it is a viable one, a real and stable alternative to the Con regime.

And to do that the leaders of the three parties must be able to get out there and sell that alternative, and reassure Canadians that the Coalition would be good for Canada. In a calm and professional manner, unlike the last frantic time.

To miss out on an historic opportunity like that one, at a time like this one, would be a crime against Canada. As well as a dangerous political mistake. Because if the opposition signs off on the budget, just like it did on the Throne Speech, the next time the opposition decides to bring down the government the Governor General will have no choice but to call an election.

And if the opposition is in no position to fight an election,because they don't have the money, Harper will play them like puppets while our country burns. And the Liberals will look as impotent as they did under Dion.

But whether they put their party or their country first. They really have no choice.

Any way you add it up, and whether you like it or not, the Count was always going to be the leader of the Liberal Party.

Stephen Harper MUST be defeated if Canada is going to survive.

And the Coalition is still the only way to VICTORY.

P.S. Lordy. Some people actually voted for this post. Whew. Thank you, thank you, thank you. I thought I had pissed off EVERYBODY. But just remember my motives are pure. And if I have to hide this post from my companion...that's just a reasonable precaution because he's bigger than me.

But we're all in this together....right?

Labels: Michael Ignatieff, The Coalition for Change, The End of Con Canada

As much as I love you Simon, I have to disagree. I think the Count is a quisling. He will go on to destroy the coalition and prop up the Conservatives until he feels the poll numbers are right for him to show a backbone.

Ignatieff is the worst thing to happen to the LPC. He has been since he first returned to Canada for his leadership quest.

This is an non-partisan opinion for sure. Maybe I have no right to say these things but I really believe him to be poison.

A coronation is a terrible idea. Harper will jump all over the "backroom dealing" libs. Grassroots will be totally pissed off. I have an Iggy organizser sitting beside me right now very pissed off.

Harper will dismiss the GG if she doesn't call an election. It is legal and he's set up for it.

I'm with you Simon with the coalition and the only way to dethrone Harper. I am not comfortable about Iggy unless he is willing to quit playing political chess in the public media.
If the libs decide to prop up Harper it says it all to me.
I love your posts.

Oh man...where is my noseplug? Iggy the Warmonger is no improvement over Harpo the Clown. Now we know they weren't serious about a coalition, because if they were, they'd have gone with Bob Rae, who has been in both parties and hasn't been holed up at Hahvud. How badly do they really want to save this country?

Hi Beijing...you're not the only one who feels that way. And I certainly wouldn't vote for him myself.But unfortunately this coalition won't work unless the Liberals are part of it. And since the Liberals seem determined to make him leader, I just want them to get it over with as soon as possible. So the Coalition has a chance to properly make its case. My hope is that the desperate situation will lead him to make the right choice....

Hi Mark....don't worry about Harper he's in no position to critize anyone. Remember he's been really damaged.
As for Harper firing the Governor General for exercising her rights, well in that case I think we can ARREST him. :)
The fact is at a time like this the progressive forces just have to be ruthless, take power and keep it. If the Cons were in the same situation they'd do it too.
And since only the Cons have money for an election right now, the alternative to accepting the GG's offer is just letting Canada burn.
Extraordinary times require extraordinary actions...

Hi janfromthebruce...as I told Beijing Iggy is too right-wing for me. But I don't have to vote for him. All I ask is that the Liberals get their act together,so the Coalition can have a chance to make its case.I'm confident if they do that Canadians would be happy to have a more consensual and Canadian government actually governing instead of playing cheap political games.
If the Liberals decide to prop up Harper's hideous government they will pay a big price for wrecking all that hope for change, and I don't think Canadians will ever forgive them...
And I'm glad you like my posts...I really don't have the time these days. But if I have to give up sleeping I will... :)

Hi Bina.... I know it's kind of shocking isn't it. I was wondering how you would react. :)
But just one thing...ANYONE is better than Harper. It's only because I hate that horrible man so much that I can countenance the thought of Iggy.
And don't forget is he is in a coalition he will have to govern by consensus, and Jack and Duceppe can keep him in check....