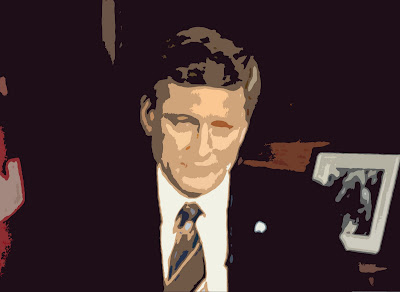 As I waited for Stephen Harper to begin speaking I wondered who he would be tonight. The foaming rabid demagogue who is willing to destroy this country to save himself? Or would he try to be Mr Reasonable...and beg for his job?

But as soon as he opened his mouth I knew that The Creeper was BACK.

The same guy with the weird voice who tried to fool Quebecers into thinking he was just a poor little nice guy during the French-language debate. Only to have Quebecers take one look at that scary phony apparition and run for their lives .

So I'm not going to say anymore about the speech except to say I thought our side beat the shit out of the tyrant.

I just want to say a few more things about Harper's insane war on Quebec. I know I blogged about this earlier today.

But as a proud Quebecer and a proud Canadian, who lives in both French and English, I feel I need to say even more. Because I love my country too much to let that maniac get away with MURDER.

(1) The Bloc Quebecois has every right to be a member of the coalition ....if only in a supporting role. It represents the views of millions of ordinary Quebecers who pay taxes and are Canadian citizens like everybody else. And most Bloc members are not separatists they are social democrats who voted to stop Harper from killing our CANADIAN values. So they should be applauded not vilified.

(2) Jacques Parizeau's gloating is not a sign of strength it's a sign of weakness no matter what this right-wing idiot says.

The fact is the separatist project in Quebec is DEADER than a door nail these days. And because most Quebecers support the Coalition for Change, Parizeau had no choice but to make it sound like a separatist victory instead of a victory for Canada... which is what it really is. And the truth is that except for a handful of hardliners NOBODY gives a damm what that ridiculous old man has to say anymore.

(3) Harper's use of the word separatist in English Canada may work to stir up the anti-Quebec hatemongers. But in Quebec it will go down like a BOMB. Because we don't call them separatists we call them sovereignists and many of them are members of our families or our friends. So we may disagree with them strongly, but we love them all the same. And when Great Crazy Leader attacks them in such a vile manner, he attacks us ALL.

And that Alberta separatist is going to pay for it. 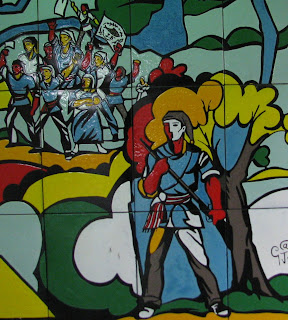 Political analysts say such tactics could likely fuel the secessionist movement, which has been off-the-radar for the Bloc Quebecois in the past four or five years.

I only hope our country doesn't pay for it as well. Because by whipping up anti-Quebec feeling, and pitting the West against the East, Harper is lighting some long dead fires that could one day consume this nation.

And for that reason ALONE he must go.

The Creeper has damaged our beautiful country enough. Now he's trying to KILL it to save himself.

We cannot let him get away with it.

Defeat him. Crush him.

Yeah, Harper didn't do anything new or surprising. However Dion's video was disastrous. Amateurish and late, wtf. As Kinsella says, someone should get fired.

Keep up the great work, Simon. I'm thoroughly enjoying your commentary on this situation.

I second what JJ just said.

You nailed what many people forget. In the Basque regions of Spain, some support ETA, others support some level of autonomy and others support being part of Spain. But when you attack the Basques, all of them get offended.

Hi Kelvin...oh this video stuff is just trivial nonsense. The fact is the Cons have a whole TV centre and our side doesn't. But I'm sure Canadians were more concerned about the content of the speeches and while Harper had nothing to offer our side did.
And besides the Cons overproduced Harper so much it came out looking and sounding really CREEPY. And that won't help him either...

Hi JJ !! thank a lot. After the crushing disappointment of the election this is practically a dream come true. Just the sight of a united left has made my spirits soar. I so much want it to work out because if it does the Cons are finished FOREVER...
Golly just writing that last line gave me a rush. May this dream never end... :)

Hi Beijing...thanks...you know I can't believe that a Canadian Prime Minister could whip up this kind of hatred against a province, and create a national unity crisis to suit himself. Just like I wouldn't agree if somebody whipped up hatred against Alberta. Because as much as that rube province annoys me sometimes, my Canada includes them too.
I realize that if a Coalition is to be successful it has to reach out to the West. But how can they do that when the Harperites are pitting the two sides of the country against each other. It's appalling and disgraceful and that's why I believe if for that reason alone the tyrant should be toppled....

It's not Harper, so much as the machinery and western venom behind him, that worries me. The people in the shadows like Tom Flanagan, Doug Finley, Frank Luntz, the Civitas Society, and the Calgary School are a) largely anonymous b) not bound by parliamentary rules c) incredibly focused and d) a "well-oiled" (pun intended) machine. That's where the threat truly lies. Everybody seems to think that if Harper is removed everything will be fine, but that is not the case at all.

I think the "gaffes" in the economic statements were intentionally used to see if the opposition would meekly back down again or if they would take umbrage and form a coalition, which required the support of the Bloc to have any significance. The CPC could then crank up the separatist, anti-democratic rhetoric to polarize the whole thing and I think unfortunately they've been very successful. Either way the constituents in the opposition party ridings were going to be upset, so Harper was going to "win", and now he got his prorogation - circle the wagons of holiday propoganda - Yippie-eye-kai-yay!

It is my hope that neo-con bullying will not work federally, but it worked here in Ontario for a (very) long time, so why wouldn't it work across Canada as well? When the Mike Harris thugs came in, I thought there was no way it could work here and that the voters would see right through it, but I was sadly mistaken and as we all know history has a tendency to repeat itself.

It will take a concerted effort by LIB, NDP, and even "red" CON voters to take them down a peg in the next election, which of course Harper wants to happen as soon as possible. Bearing in mind his desire for an election soon, don't expect much "economic stimulus" and maybe he'll even go back to poking the opposition in the eye with a stick again. I hope sanity will prevail, but I'm not counting on it. I sure hope the neo-con zealots in my neighbourhood don't go back to cutting the break lines in cars in driveways with a non-Conservative sign, like they did pre-Oct. 14. Some morons will resort to anything! ;( Great blog Simon.

Perhaps the time has come to put some counter-spin on Harper's separatists message: Stephen Harper is a separatist

I think it´s a shame that our politicians speak so bad about each other! Dion and Duceppe are scoaching eachother one day and then - when the time comes to fight the Giant - They found out they need each other - So they take a Jakusi together! I am trying to teach my kids not to speak bad about others... but then the aweful truth is that "there is no respect for Leadership anymore!" Duceppe slept 4 years in a row... and oups the Chloroforme effect stopped for the election - what does he expect???