The King of Mean and the Bullying of Harperman's Tony Turner 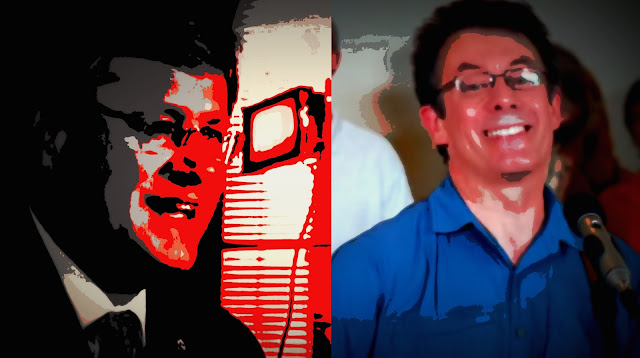 It has been several days since the Harper regime suspended the federal scientist Tony Turner for writing and singing the song Harperman.

And as expected it has triggered a debate over whether public servants can be political activists.

And while some Cons claim they can't, and that they must remain loyal to their monstrous master.

The Supreme Court settled that question twenty-four years ago.

The court ruled that banning political activity infringes on workers' Charter rights to freedom of expression. Public servants can now volunteer for election campaigns, post political lawn signs, make phone calls and deliver flyers — so long as they don't use office resources and their activities don't impede their ability to do their jobs.

It freedom of expression includes the right to speak, it must surely include the right  to sing. Turner's singing doesn't affect his job. And his union couldn't be more right.

"When we look at this individual case of an Environment Canada scientist who studies migratory birds, it's quite difficult to make the link between the work he does and any impact that video might have on his ability to do his work," said Debi Daviau, president of the Professional Institute of the Public Service of Canada, the union that represents public servants.

"If there's anyone who's guilty of getting in the way of our members doing their jobs impartially, it's the Harper government and their policies."

It's Stephen Harper's thuggish Con regime that is guilty of trying to politicize the civil service, or bully it into submission.

And it is, as Michael Harris points out, just the latest example of the King of Mean's reign of fear. 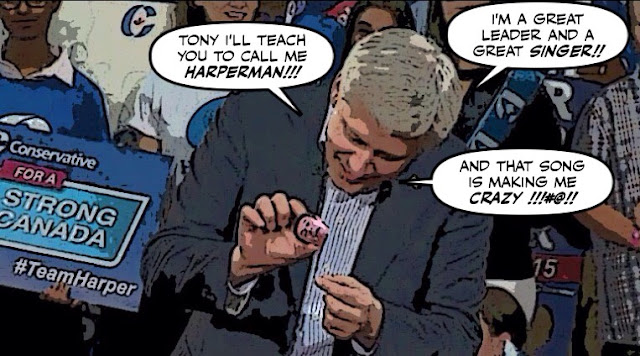 Stephen Harper never surprises. He just keeps on getting worse. Amongst other things, he proved this week that he is the king of pettiness. A federal scientist, Tony Turner, has been suspended for singing. Only Steve, it seems, can sing.

And they call this a breach of the code of values and ethics for a civil servant. Say what? How about Harper’s inner circle and members of his PMO senior staff? In Harperland, criticism set to music is worse than lying, cheating, bribery, breach of trust and peaking into other people’s forensic briefs?

Just the latest example of how he has terrorized civil service bosses, the RCMP brass, Harper's generals, and so many others, into dancing to his ghastly tune.

Everyone in Steve’s servitude is merely trying to please the Boss, including the starched-collar types in the Privy Council Office and the top mucky mucks at Environment Canada. A plague of pileated woodpeckers hasn’t descended on Ottawa. That tapping noise you hear is just federal bureaucrats’ knees knocking.

Or if you're an ordinary citizen, face the wrath of his ex-military private security force, for daring to speak out in the presence of Great Leader... 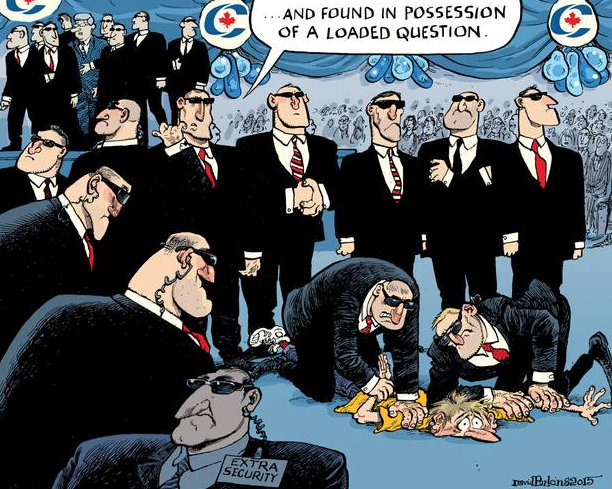 Because this is Harperland, where fear RULES. And even a gentle scientist like Tony Turner must be suppressed and punished, even as he prepares to retire, for daring to criticize a depraved dictator.

So the message is spreading:

And as a bonus, I came across another song by Tony Turner. Which isn't political but is equally inspiring...

And yes, enough is ENOUGH.

The Con regime and its hapless stooges should stop persecuting and trying to silence the gentle, decent, and very Canadian Tony Turner.

And we should join in a circle of resistance. All of us.

And defeat their depraved leader, that monstrous maniac.

Before he strips away even more of our freedoms.

Before he muzzles us all... 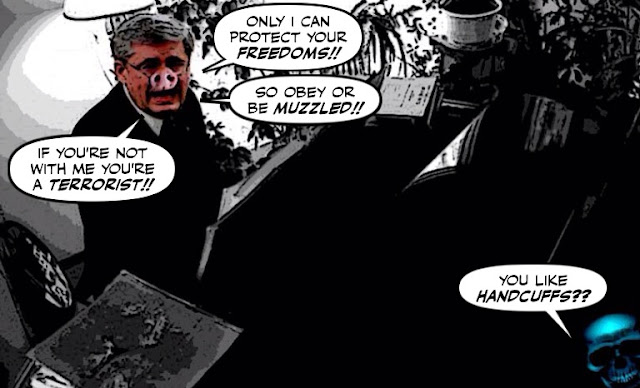 another song that makes me think of Harper. it by Bruce Cockburn. He surrounds himself with facist archetecture

The neo cons thrive on divisive controversy. The strategy goes something like this. With the destruction of the private sector manufacturing base the members of the large public sector unions now have better pension plans than their private sector counterparts. This is an issue as it is the private sector tax dollars that have to help support them. All that busy Canadians see is ... large public sector union = controversy again =never satisfied = vote for Harper. Rather than work towards an improved fair pension system for everyone they drive a wedge in order to bring everyone down to the lowest common denominator. Simple but somewhat effective especially if one does not look closely at the underlying issues.
RT

Simon, you are marvellous. Keep on keeping on SHarper's case.

when is Tony going to release his first C.D/record. I'd buy. Something to sing about while driving on my way to vote. The man will have a second career.

"Over the last 35 years, the economic growth necessary to increase living standards, increase wealth and manage growing inequality has been based increasingly on rising borrowings and financial rather than real engineering. There was reliance on debt-driven consumption. It resulted in global trade and investment imbalances, such as that between China and the US or Germany and the rest of Europe."

"The official policy is "extend and pretend", whereby everybody conspires to ignore the underlying problem, cover it up, or devise deferral strategies to kick the can down the road."

Methinks it also applies to Harper somewhat, for he likes mandatory minimum sentences.

Tough on crime is tough on people
http://convergemagazine.com/tough-on-crime-is-tough-on-people-15812

You read the Bible in your special ways
You're fond of quoting certain things it says -
Mouth full of righteousness and wrath from above
But when do we hear about forgiveness and love?

Monday evening I attended Mulcair's rally in Penticton. Over 1000 attended. It was electric! No one can recall a provincial or federal rally in Penticton where that many people attended! I only saw 2 security men. Neither were wearing dark glasses. 8-)

hi Kathleen....I never watched that show since I have an irrational fear of spiders and other nasty crawling things. But yes some people will do anything for money. I pity them, because I know it to be true that money can't buy happiness. I live just a few blocks away from Bay street and consort with some of the young slaves who toil in its bowels. And I can truthfully say that although they have more money than me, I am much happier than them...

hi Steve...yes I like Bruce Cockburn, I used to have a line from one of his songs in my sidebar. And I'm sure he is no friend of Harper...

hi RT...what you say is absolutely and very depressing. For the Cons do always seek to divide us, and unfortunately far too many Canadians are driven by envy, and only to eager to take us all on a race to the bottom. We should of course be thinking of how we can provide income security for all seniors, but the envious and the small would stand in the way of progress, even if they end up cutting their own throats in the process...

hi George...thank you very much for that kind comment. I'm not really marvellous, but I do try my best, and I do want to help take our Canada back. Although I'm sometimes too tired to think straight, I live for the day when we are free again, and kind words like yours are very encouraging...

hi e.a.f.... I don't know, but he strikes me as a really decent Canadian, I admire his activism, and wasn't that Circle of Song beautiful. I'm going to learn to play it and sing it. I have a horrible singing voice, but since I sing so softly it doesn't bother too many people... ;)

hi anon...you sum up the situation well. Our whole society depends on credit, to keep us consuming. But with inequality rising, and wages falling, sooner or later not even credit will keep us afloat. We need to reform and modernize our economic system and make it more just, or there will be a revolution...

Thanks for your comments. I have 2 CDs and another coming soon. Visit www.tonyturner.ca
Tony

I read today where lately Sweden with 1/4 the population of Canada has opened its doors to 30,000 fleeing Syrians but our government at the same time has allowed less than 150 Syrians.

Hi Tony....thank you for your songs. I can't believe how badly you have been treated. But your spirit will carry you through to the better day I'm sure is coming soon. And as you know yu have millions of supporters all over Canada...

P.S. I'll definitely be getting your CDs and learning to play them on my guitar. Now if only I had a singing voice *sigh* ;)