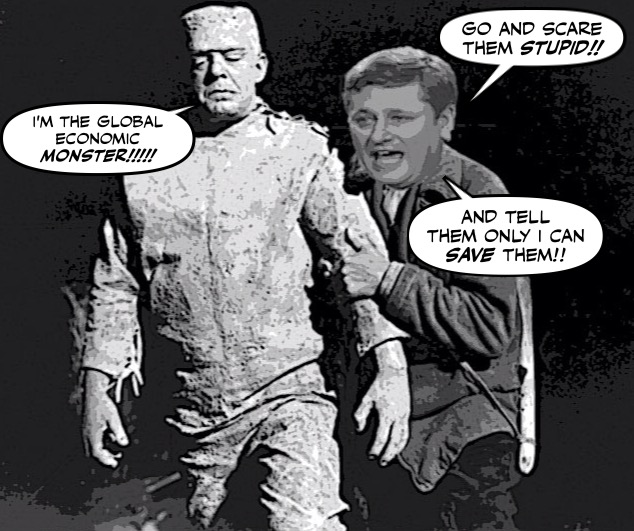 It says something really horrible about Stephen Harper, that whenever he feels threatened he tries to scare Canadians.

First he tried to scare them by claiming that the criminals were EVERYWHERE and that only he could save us by sending even more Canadians to jail. Even though the crime rate is at its lowest level in decades.

Then he claimed that the terrorists were EVERYWHERE, and that only he could save us from being beheaded in our beds.

Now he's showing his teeth again, and trying to scare Canadians with the Great Economic Menace.

A feistier Stephen Harper appeared on the campaign trail Tuesday as volatile world markets pushed the election debate back to his favourite subject: the economy.

“These are challenging times, but I think they speak once again to why this government’s strategy is the correct one,” Harper said in Quebec City, where he announced a plan to improve port facilities in the province.

Claiming that only he can save us from economic catastrophe, and that it would be too dangerous to let the opposition parties govern.

So we must stay the course... 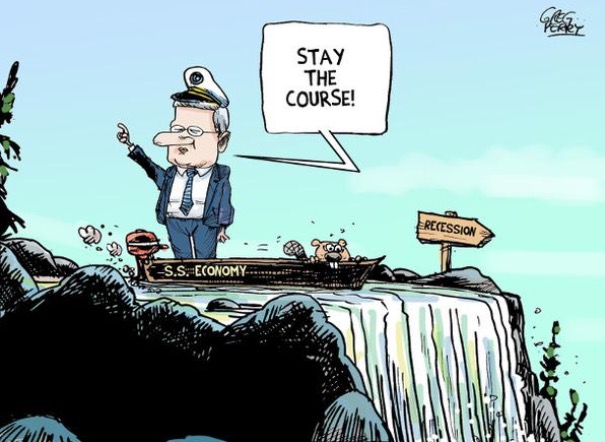 When in fact it's his oily and incredibly shortsighted economic policies that have brought us to the brink of disaster.

The ones that torched our manufacturing sector, used foreign workers to steal our jobs and drive down wages. Failed to prepare us for a greener future. And are now driving even mighty Alberta into a brutal recession.

Faced with a collapse in energy prices, widespread drought, forest fires and the uncertainty of an untested government, the engine that drove much of Canada’s growth over the past decade has seized. Alberta’s economy is expected to contract this year.

While the tanking loonie makes everything we buy from abroad more expensive, including food. So millions of poor people are going to have trouble feeding their families. Even more kids are going to go to bed hungry.

And even more seniors are going to have to choose between eating or taking their medication.

But still Stephen Harper would claim that he's a Great Economist Leader, and still many Canadians believe him... 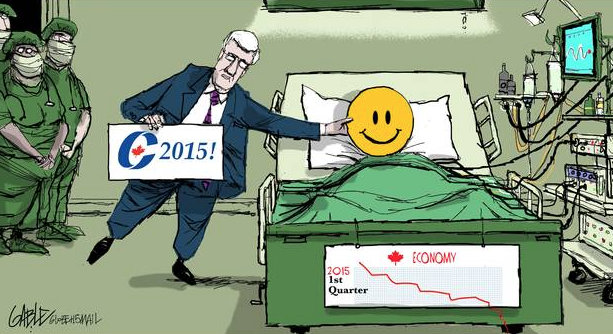 It's beyond belief. It's not just idiocy, it's insanity.

And the good news? The number of suckers is shrinking, and more and more Canadians are finally waking up.

A new poll suggests most Canadians (79 per cent) agree the country feels like it’s in recession, nearly seven in 10 (69 per cent) believe “it’s time for change” and more than half think a victory by Stephen Harper’s Conservatives would be bad for the economy.

More and more of them are finally realizing that Harper is not the solution he's the problem. Finally understanding that others can do better.

And that Harper is the one too dangerous to be allowed to remain in office... 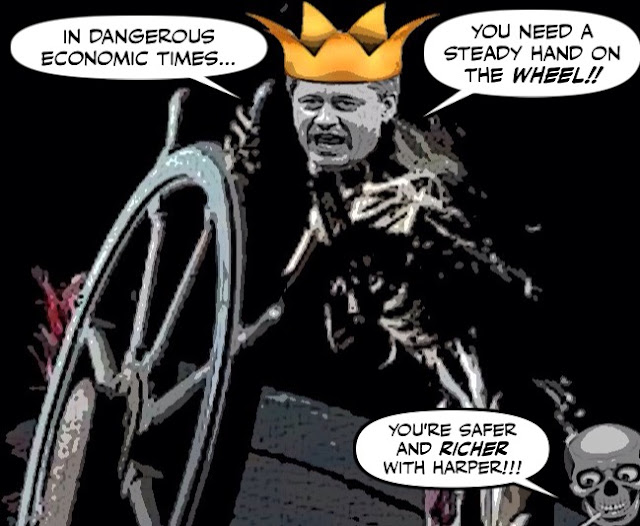 You know, as I've said before, for me the state of the economy is not the main issue of this campaign. The state of our raped and bleeding democracy concerns me more.

For I would rather be dirt poor but free. Than be rich in a grubby dictatorship under the  filthy thumb of a morally depraved leader like Stephen Harper. Who corrupts everything he touches, lies like thief. And would use fear as a weapon against his own people.

But yes, the economy is important. I hate to think of all those hungry children and all those dead seniors. 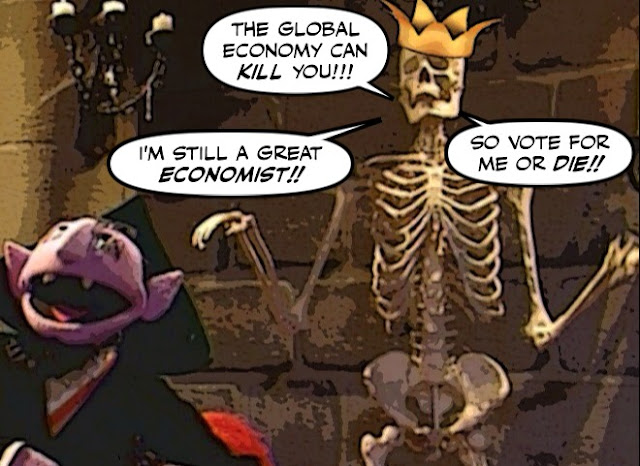 That loser, that maniac.

Before he ruins us all...

They can do all the jiggery-pokery with statistics that they want to. But I think the hundreds of thousands of unskilled jobs that went to exploited temporary foreign workers, the tens of thousands of eliminated public sector positions, the shuttered manufacturing plants, and the stagnant incomes and soaring tuition and housing prices have accumulated to the point where enough people see neo-liberalism as discredited.

The guilty culprit for Canada's problem right in unresolved Treaty about to disassociate Canada in final deadline on eighties Agreement Act extension on deadline now, guilty before PM Harper is former PM Mulroney, for having received pay from crime-ring discovered by OHCHR who investigated Swiss bank accounts and has jurisdiction to divulge details! Harper is too busy trying to access forgiveness and political immunity for all Canadians involved political or not - when Agreement Act states clearly forgiveness will not be possible only real consequences if Treaty is not dealt with appropriately!

Anyone who believes what Slithery Steve is saying really should consider getting a lobotomy. Rome is burning all around him and we should "stay the course". Sure Steve, your tired bag of tricks are as empty as your soul and most people are finally realizing it.
The worst PM in this country's history will soon be just that, history.
JD

Keynes eventually gave us the greatly expanded middle class and the growth of the '50s. Friedman and the Chicago school gave us the mess we now face. Harper's Master's dissertation was basically "Keynesian economics is stupid". Sorry Mr. Harper. It appears you are stupid.

If you watch the leaders campaign speeches, I have the impression Harper has the smallest crowds.Of course there is no way of knowing as the cameras rarely pan the entire audience:

re: stay the course

As the saying goes....If you are digging a hole and you want to climb out of it, the first thing you have to do is quit digging. 8-)

hi thwap....I hope you're right. Surely after the state the Cons have left the economy in, Canadians won't be fooled any longer. To reward rather than punish those Con artists is simply unthinkable, and would be the final nail in this country's coffin...

hi anon...yes, you're right to blame Mulroney for leading us down the slippery slope, and delivering us into the hands of others. But at least it was more or less transparent, and there was a big debate over the free trade deal. These days we have no idea what the Cons are plotting behind closed doors, and what sellout they might try to foist upon us. The sooner we fire them the better...

hi JD... I agree, anyone who still believes Slithery Steve must be a hopeless Con or an absolute idiot. It's incredible how he lies like a thief at every campaign stop, and manages to get away with it. I have honestly never seen such a pathological liar, and to think he's the Prime Minister makes it even more shocking. But yes, hopefully his ghastly time is almost over...

hi UU4077...yes Steve has always considered Keynes to be a commie, even though Keynes was a genius, and Harper is unfit to even stand in his shadow. Harper's views on Keynes should have been enough to disqualify him from office, and should have been seen as a warning. But unfortunately like so many other warnings it was ignored, and look where we are now....

hi David....well you can't expect the Cons to allow too many people into the presence of Great Leader. They can't vouch for the absolute loyalty of them all, and as we've seen the occasional dissenter has slipped past their vetting process, and offended Great Leader's ears, before being given the bum's rush by his many bodyguards. It couldn't be more of a parody, or more outrageous...