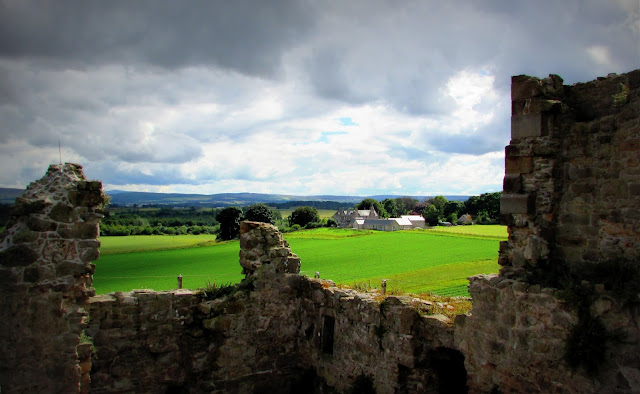 I started writing this post in the ruins of an old Scottish castle not far from my family home.

And as usual I couldn't help but think of those who thought these massive walls would stand forever. Only to see them brought down by time, war, or the madness of some king.

Just like our mad king Stephen Harper is bringing down the walls of his foul Con regime. 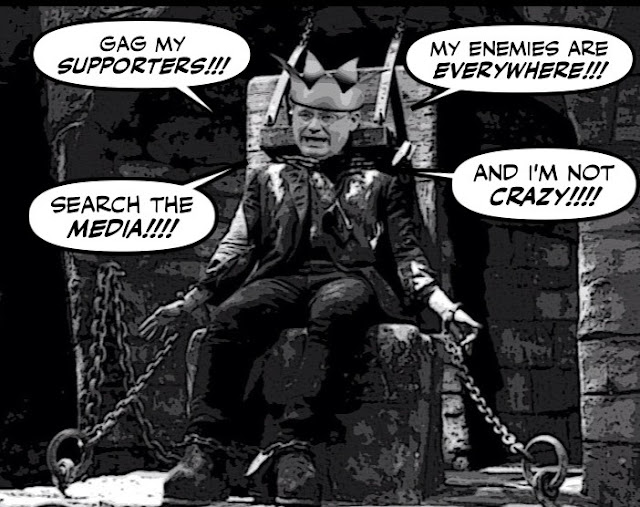 For let there be no doubt this is madness.

Members of the public who attend Prime Minister Stephen Harper’s campaign events are being required to agree to a gag order before they can walk through the door, iPolitics has learned.

The act of a deranged leader who is now so paranoid he can't even trust his own supporters. And would treat members of the media as potential terrorists.

On Tuesday, veteran Queens Park reporter Susanna Kelley was refused entry to a Harper campaign event. While she arrived 20 minutes before the start of the event, she was told she could not enter because RCMP sniffer dogs were not available to check her out.

It's a truly disturbing situation, and Harper's bizarre behaviour must surely raise questions about his mental state. and whether he is still mentally fit to remain in office.

But the good news is that crazy desperate leaders make mistakes and this one could be fatal.

Conservative Leader Stephen Harper is denying he told his former chief of staff Nigel Wright he was “good to go” with a $90,000 payment to embattled senator Mike Duffy.

“The words you are quoting are not my words. They are somebody else’s. I have said repeatedly, and I think the facts are clear, I did not know about — that Mr. Wright had made a payment to Mr. Duffy.

Because Wright was already annoyed by the way Harper changed his story to claim he had fired him after first saying that Wright had resigned.

And making him sound like a liar and/or a maniac is sure to annoy him even more... 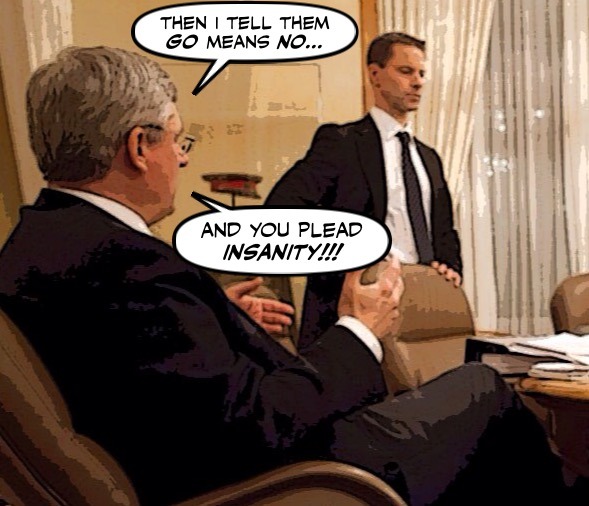 So who knows what he might say when he testifies later this week.

Which can only put even more pressure on Harper. Or as Michael Harris writes make him look more like a cowardly lion.

Now, as revealed this weekend, if you want to see Harper The Great and Powerful in person, you have to agree in advance to shut up and never speak a word of what you saw or you won’t get through the door.

I’m not sure what democracy is anymore in Canada, but I’m pretty certain its got nothing to do with agreeing to get frisked and letting people and dogs mess with your junk before you attend a political event. Do they even do that in Myanmar? 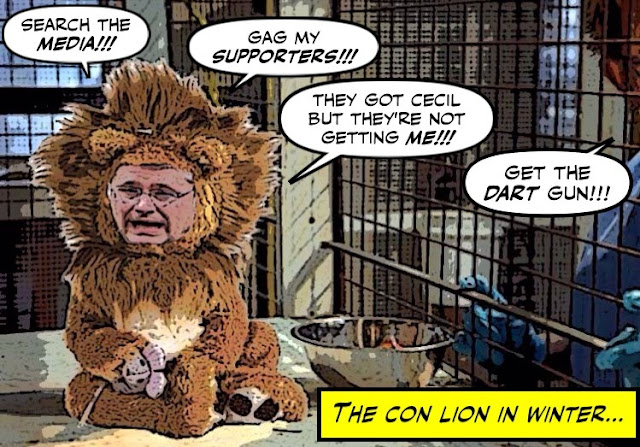 You know, there are strange stories floating around Ottawa these days. Some claim that King Harper is now so crazy and abusive many of his staff dare not go near him.

And that's the real reason they want to limit his exposure to the public.

Others say that he had to be sedated for the leader's debate.

But one thing is for sure, rattle his cage as much as you can, and like so many tyrants before him.

His sanity could crumble, and the Con castle could come tumbling down... 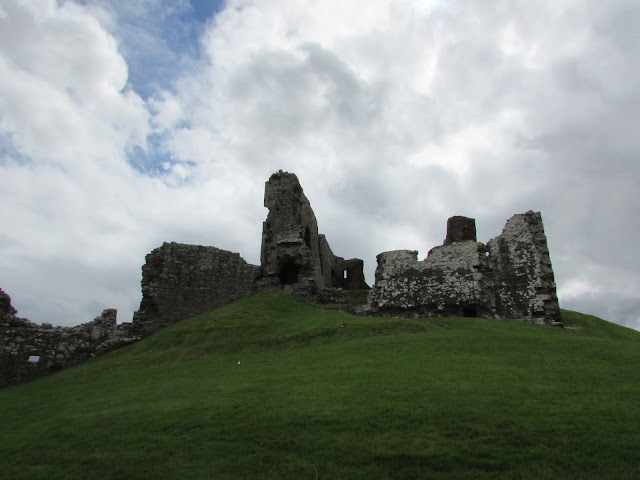 I just wanted to tell you how much I liked your imagery in this post!

Have a good holiday.

Simon, I have some good news from here; despite the problems of "DiversCité" (having worked for more than one festival, I know that the administration can get very, very greedy) FiertéMontréal is going ahead as planned.
http://www.fiertemontrealpride.com/

The media should "pay no attention to the man behind that curtain." In other words, if the media refused to cover his campaign, he would change his tune quickly.

Harper reminds me of Bill Clinton, who said: "It depends upon what the meaning of the word 'is' is."

Harper made not have responded PRECISELY with these words: "I'm good to go with the payment."

But Harper probably said something to Wright like: "Do it." or "Do what you need to do."

it is most amusing that steve now wants to restrict people leaving Canada for countries he deems "terrorist". How funny is that. So one day he wakes up and decides Japan is no longer on "his team" and we get banned from going there. Could happen to any country. Only those permitted by Steve to go there would be approved for exit This is going to be good. So what happens the day Steve decides we can't go to Turkey or Russia because he decides it is a terrorist country. The man is mad. Any politicians who goes around sounding off like that in a western democracy is ready for the looney bin in my opinion. So do we get banned from going to Iran? It may not have ocurred to "nut bar" Steve, that he is upsetting a lot of voters. They infact are being placed in a position to not be able to travel to see their relatives and/or do business. Only in Canada you say. Well Simon, have a good visit with Scotland. If steve is re elected and decided they are "terrorists" because they want to leave G.B. you too could be banned from travelling. This ought to be funnier than hell. of course we have Rocco G. to take Steve to court, if by any chance Steve is re-elected. We might want to remember the Cons have cheated in every election todate that they "won". Oh, well perhaps The "A" group can keep the cons on the straight and narrow.

Trust you are enjoying your vacation.

Hi lagatta...thanks...it's not hard to come up with that kind of imagery in this country where even the smallest village has a history of conflict dating back hundreds of years. And I am having a good holiday although I rapidly discovered that I am in no shape for serious cycling through the highlands. ;)
But we're off to Edinburgh tomorrow so that should be wild...

Hi lagatta...thanks for that link. It's a very nice website, and it should be a great party. Unfortunately I'll still be in Scotland when it happens but I'll be thinking of you...

Hi Kirby...that would certainly work, but it won't happen. I am however quite encouraged by the fact that even some Sun reporters have been criticizing Harper like they never have before. They do have a lot to make up for, but better late than never....

Hi David....yes I agree. Harper is playing word games to avoid what everybody knows or should know to be true. A control freak like Harper would never have been out of the loop on such an important story in his own office. But I am confident most Canadians will come to that conclusion, and he will pay a political price...

Hi e.a.f...Harper's "terror tourism" dictate is worthy of a tin pot tyrant and clearly yet another product of his desperate state. And yes, I have wondered whether Harper would try to criminalize my friends in Doctors Without Borders for operating in countries he deems too terrorist. Or heaven forbid criminalize me for supporting the Scottish National Party. But my feeling about that is the same as I feel about all his other ideas. He can roll it up into a ball and shove it where the sun don't shine...