Does Stephen Harper Agree With the Republican Loon Scott Walker? 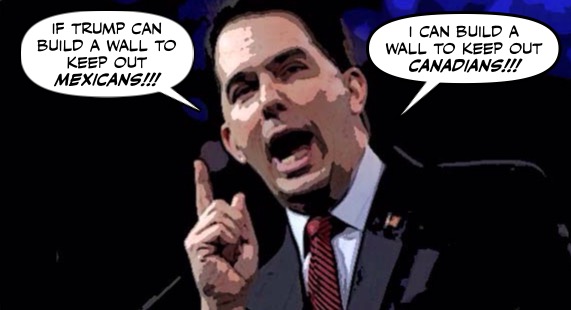 Scott Walker is one of the most reactionary Republican candidates, a union basher, an anti-gay bigot, and a fascist if ever there was one.

And now he's trying to out trump Donald Trump.

For while Trump wants to build a wall along the U.S.- Mexico border,

Walker thinks it might be a good idea to build a wall along the Canada-U.S. border.

Wisconsin Gov. Scott Walker is putting a new twist on the topic of securing the border, a staple among the Republican candidates running for president, by pointing north. Walker said in an interview that aired Sunday that building a wall along the country's northern border with Canada is a legitimate issue that merits further review.

As Trump has gained support, Walker has slipped in the polls to the middle of the pack of 17 Republican candidates.

And the question I have is does Stephen Harper agree with Walker? And if not can he now please explain what they discussed at that secret meeting?

Prime Minister Stephen Harper quietly took a meeting last month with Wisconsin Governor Scott Walker, a likely candidate for the Republican presidential nomination and a bête noire to American progressives for his anti-union policies and vocal opposition to same-sex marriage.

The Prime Minister’s Office made no mention of Walker’s visit in Ottawa, issuing neither a press release nor media advisory. The only notice of the meeting came in a press release from Walker’s office that was picked up by a few political blogs in the U.S.

Because I can't help but feel that whatever Harper says, about the wall or that secret meeting, will say a lot about him.

The Cons REALLY didn't want to talk about that meeting or why they tried to hide it, but now they'll have no choice.

And at a time like this one it couldn't be more embarrassing... 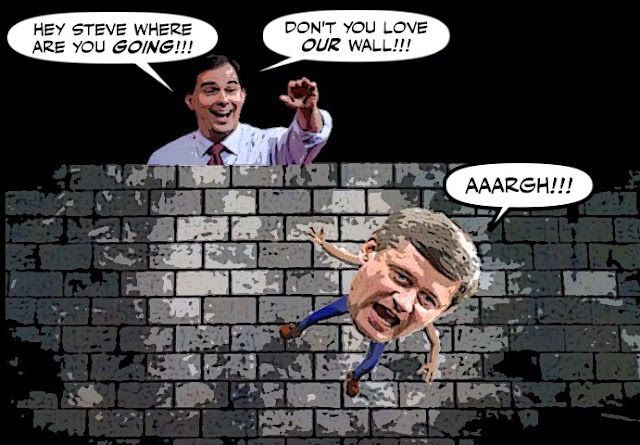 You know, nobody in the MSM has mentioned that secret meeting. But for almost ten years I have kept a daily record of Stephen Harper's monstrous time in power.

I forget nothing and I do know this:

Fascists of a feather flock together.

And the more we expose them.

The more easily we will destroy them...

As Harper only allows 5 questions at each campaign stop, I hope Laurie Graham (CTV), Hannah Thibideau (CBC)
and other reporters ask him whether he agrees with Walker's idea. And in the preamble to their question, mention that he met with Walker last June at a private meeting.

Unlike President Obama, Harper is not stopping his blackmailers and this will lead to disassociation from UN due to signed Treaty necessitating Critch and now Buhler go to ICC for investigation.

Is our only recourse to demand Harper be 'rescued' with psychiatric intervention?

How to get enough people informed?

Given the US murder rate the wall is a great idea especially if they were to grant refugee status to Stevie and the Cons before sealing it off from the rest of the world.
Rt

Simon,I could not believe how the good citizens of Wisconsin could possibly vote for a confrontational loon like Scott Walker. There were very boisterous appeals from the populace that rejected Walker's undemocratic manipulations, but he was elected anyways.Obviously the financial support from the Koch brothers and other right wing belligerents of the moneyed class are the ultimate deciders of who wins and who loses The apathy and the ignorance of our fellow citizens, young and old, is extremely depressing.

Prior to the Obama being elected during the last US election we toured both Washington and Oregon. We boldly asked folks, primarily in the service industries, what they thought about the upcoming election. The answers we got were: "What election?"; "I don't vote!."; "It doesn't matter nothing will change." These folks were not dumb, they were intelligent, courteous, and respectful. Most of these people were in the 20 to 40 year age bracket.

What is extremely sad is many of these citizens, like many Canadians, are letting the last semblance of Democracy slip away, This, our system of government, should benefit and sustain the well-being of all citizens, but most people to their disadvantage seem uninterested.

The only way to sustain and maintain Democracy is to get fellow citizens involved and eliminate the insane financial imbalance in the election process. If no effort is made to save our democracy, serfdom of the dark ages will prevail.

I'm sure Scott and Steve were just having a friendly chat on how their respective campaigns were going to run, how to do each other the least damage, and how to ensure their fellow travellers benefited the most. the northern wall, won't upset Steve. He understands Scott has to say something to get elected and why not. There are still Americans who believe 911 terrorists came from Canada. Why not build a wall. Now the wall would be good for Canada. It might keep out American guns. that would be a start. of course building that wall along the Great Lakes is going to be fun, then through the Rockies. Its a really, really good idea. Just think of all the jobs it will create for Americans and all the racketeering and profiteering for corporations. The wall might create a few problems on the odd river here and there. Don't know how the wall would work if the Republicans wanted a pipeline, but hey perhaps they can get Shorty Guzman to work some of it out for them. He has some really good engineers, from what I read.

The Republicans want to re institute policies of isolationism. that might work in theory, but their economy is tied to the world. If they want to protect themselves they ought to first disarm themselves and then ensure no other nationals own their harbours. Then they might want to protect their harbours. as long as the Americans can't keep drugs out, they won't be able to keep anything else out either. of course Scott and the Donald seem to have forgotten this is the age of airplanes and jets. What can not go through a wall, can go under or over it. So much for these presidential candidates. They may have big mouths, but brains, not so much.

Just another sad little tidbit if how heil harper has changed the world's view of Canada.
http://russia-insider.com/en/canadas-victims-communism-debacle/ri9413

hi David...yes, I hope the MSM can bring up that secret meeting with Walker when they ask Harper about the wall. I'm pretty sure they didn't talk about the wall, but if the Cons went to such lengths to conceal the meeting, you know they were up to no good. And let's not forget that walker is a henchman of the Koch brothers...

hi Chris...in my opinion the dictator is pretty close to needing an intervention, but what we need in this country is a massive democratic intervention. None of this is normal, and this madness is definitely not Canadian...

hi RT....well the wall will never happen, but between Trump and Walker we may one day wish we had one...

hi anon....yes it was disturbing how many in Wisconsin voted for Walker, and I believe re-elected him after all his democratic abuses. But then as you point out, he had the backing of big money, and voter apathy is a huge problem, in the U.S. and Canada. I will always believe that only a democratic movement can change things, and stop those homegrown fascists in their tracks...

hi e.a.f....Walker is just trying to posture to try to match Trump, who as i pointed out in my post is eating his lunch. But I consider him even more dangerous than Trump. Walker's anti-union views border on fascism, and he is an absolute tool of the Koch brothers...

would not be surprised at all if Steve and the Koch brothers were more than "nodding aquaintances".

To her credit, CBC's Rosie Barton DID mention on Power & Politics (Monday) that Harper met with Walker last June.

hi Kathleen...I believe he is.their tool. The Koch brothers own a vast amount of the oil sands and stand to benefit the most from the construction of the Keystone pipeline. And I wouldn't be surprised if Walker was their emissary, for nobody has supported him as much as those brothers have...