The Main Reason Stephen Harper Must Be Defeated 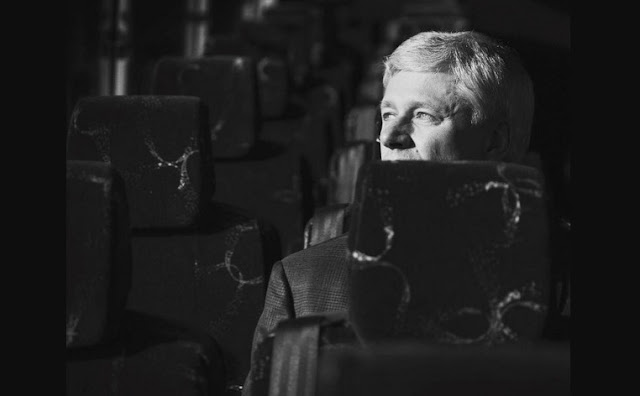 This photo was released today by the Con Ministry of Propaganda, and is apparently designed to portray Stephen Harper as a leader bearing the burden of governing this country as only he can.

The man with the lonely job of steering this country through a dark and perilous time.

But to me it represents something completely different.

It's the portrait of a monster, who is threatening to destroy this country.

The sinister representation of a man The Tyee calls a serial abuser of power.

Stephen Harper and his Conservatives have racked up dozens of serious abuses of power since forming government in 2006. From scams to smears, monkey-wrenching opponents to intimidating public servants like an Orwellian gorilla, some offences are criminal, others just offend human decency.

And the evidence of that abuse couldn't be more shocking, and is of course the main reason he must defeated.

For our country might be able to survive his serial incompetence, or the way he has shamed us in the eyes of the world.

But it will not long survive his assault on our democracy and our precious Canadian values.

One day when this long nightmare is finally over we will have to ask ourselves how we could have allowed something like that to happen.

But now is not the time for that.

Now is the time to unite to defeat that ghastly tyrant.

Before he destroys our Canada... 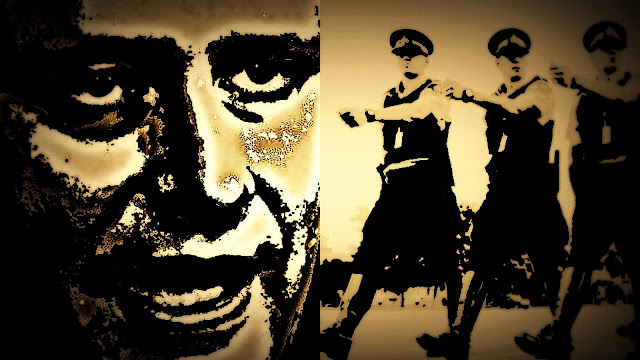 You know, I am now faraway in the north of Scotland.

And although I love this rugged place where the North Sea crashes against the rebel highlands, I've never felt so far from home.

But at least here, in a place soaked with the blood of those who fought for centuries to be free, one thing seems blindingly obvious.

Either we defeat those fascist Cons.

Or our country will be lost...

The tipping point for me Simon is that anyone who wants to attend any of his campaign stops to hear what he has to say and ask him questions must first be vetted then given an invitation. If you don't have an invitation then you don't get in. So the majority of the Canadian public in a free, open and democratic election are prevented from hearing the PM of Canada in any of his campaign stops. He is doing this right before Canadians eyes. If that alone does not make Canadians say this arrogant idiot has to go, nothing will. Get this we have a PM who is running an 11 week campaign by giving the Canadian public the finger by excluding them from any of his campaign stops. This is not just about control this is Harper exercising his power as a fascist tyrant over Canadians. Hope you're enjoying Scotland, wish I was there. After the election is all over, I'm going to have to stay in the shower for a week.

Local Montreal news showed short video clips of the various campaign activities today. The large open air crowds at the Mulcair and Trudeau gatherings was in sharp contrast to the staged seated crowd shown in the Harper clip. The Harper gang looked like they were paid.The fact is here are just so many active demonstrators that want to see Harper gone that he cannot afford to attend gatherings of the general public without them being present. He is so disliked by so many people that its going to be a real problem for him to show hundreds/thousands of admiring supporters in an outdoor venue without those nasty demonstrators showing up. Perhaps he will hire goons for counter demonstrations or just demand msm stop showing news clips where the other candidates have more than 10 people around them. Starting to look like his media spinners have a real challenge ahead.
The Baird / Anonymous innuendos suggests that Harper should have been a little less naive about bringing his international buddies into the fold. The international game is way over his head especially when he couldn't even manage Duffy without it encompassing the whole senate and associated collateral damage.. Its like the old saying " if you are in a poker game and don't know who the sucker is then its you!" Hopefully the Con years will soon be behind us and that over time a new conservative party will emerge to help shape Canada's future as they have done in the past.
RT

Nobody believes this dictator anymore. Harper tries to put on his big boy pants and fails miserably. He tries and fails to attack Notley and Wynne, he demands respect but gives NONE. In my opinion, a total narcissistic asshole.

Sadly they do believe him and he has a pretty solid base. The NDP are slightly ahead in polls but the Cons have more ridings likely to throw in with Harper.

Harper's game has nothing to do with being popular, he just wants to solidify his base and split the opposition right down the middle and walk through to victory.

Yes, Harper will win another majority government and decimate the Libs and Dips too. It may be a good and necessary thing because the centre-left will then be forced to unite for the 2019 election..... and with leaders who do not hate and despise each other as Mulcair and Trudeau do ...... it's pathetic.

That image is creepy! Befitting the character in the image.

bad picture. just looks like a guy no one wants to sit with on the plane. lone guy leader, ya right, although this picture does make him looks less of an idiot. perhaps they want to show us a new side, by giving us the profile shot. different picture, same old bull shit from Steve.