The Con Regime Goes After the Man Who Wrote Harperman

About two months ago I played this gentle, joyful song of resistance aimed at the depraved dictator Stephen Harper and his criminal Con regime.

It was written and performed by Tony Turner a scientist at Environment Canada. And I thought it was great. I liked the music and the lyrics, especially the chorus.

So you can imagine how I felt when I read that Tony Turner has become the latest victim of that monstrous regime.

And is now under investigation.

An Ottawa federal scientist is being investigated for breaching the public service’s ethics code for writing and performing a highly political protest song to get rid of the Harper government.

Tony Turner, a scientist in habitat planning at Environment Canada, was recently sent home on leave with pay while the government investigates the making of Harperman, a music video posted on YouTube in early June that has attracted about 48,000 hits.

Suspended and sent home, even though the Supreme Court has upheld the right of public service workers to freedom of expression. And even though there is no way Tony Turner's political views could affect or interfere with his job as a scientist.

But then Harper and his sinister Con cult know that, and they just want to harass and intimidate Turner. Or muzzle him like they have muzzled so many others. 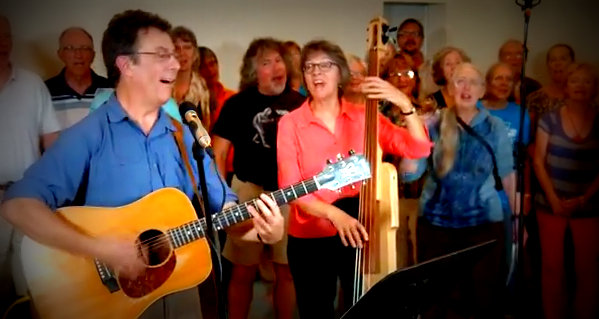 And the good news is it won't work. It will only make the song more popular, and a living symbol of resistance. For we will not be silenced.

You know, I've always loved to play protest songs on this blog. Not just to cheer up and motivate progressives, or help sustain them through this dark time in the history of this country. As those songs sustained me.

But also because I think they help remind us that this campaign is no ordinary election, it's a battle to save the soul of Canada. And one we can't lose.

So I'll be playing some of those songs in the weeks ahead, and I'll certainly be sharing Harperman as much as I can, to show my support for Tony Turner, the latest victim of the Con regime.

And you should too.

But I'll leave you with a protest song from four years ago, one of the first I ever played, and still one of the best.

Harperman it's time for you to go.

The nightmare has lasted long enough.

Now it's time to take our Canada back.

Now it's time for freedom... 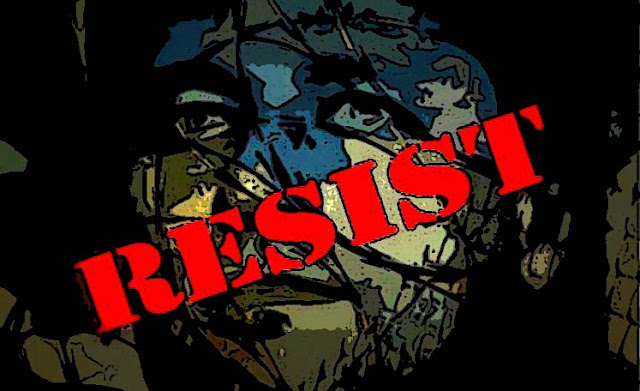 Protest songs are written and performed by Protesters, so they "must" all be "terrorists" .........correct?

And We All know should know this "T" word by now! Snicker snicker!

Shared with many friends , my friend .
Che Guevara
"the revolution is not an apple that falls when ripe. YOU have to make it fall !"
Thankyou brother for all you do Simon ,my brother in arms

Terrible that they would go after one person. Fascism for sure. I'm sure you must be in their crosshairs Simon. We must remember Denmark. As in when the Nazis wanted the Jews to wear yellow armbands the whole of the population did that. .

hi Steve...yes the Con Suppression Machine is in full swing, but only because they are desperate. Desperate Cons do desperate things but it will not save them...

hi anon...thank you, the more we can share that video, the more we can embarrass the Cons, and motivate ourselves to defeat them. It will be a revolution, and we will get our country back....

hi anon...yes it is cowardly and outrageous that those bullies would go after a gentle Canadian like Toby Turner, who is only exercising his freedom of expression. As for whether the Cons have me in their crosshairs, it wouldn't surprise me or scare me one bit. I'm only doing my duty as a citizen, and a person who loves this country and its better values. And nobody has or ever will be able to intimidate me...

Another bird watcher eh? Perhaps, a truly disturbed paranoid individual would feel threatened by such a group of dedicated, binocular carrying, caring people.

hi Kathleen...yes, no doubt the Con cult considers people like Tony Turner to be a terrorist, as well as a dangerous scientist. The fact they would go out of their way to punish him speaks volumes about that, and the popularity of the song. But as I always say, give the Cons enough rope, and they will hang themselves.

There are so many good songs. Stephen Harper Hates Me by Cathy Cook gives me goosebumps...https://www.youtube.com/watch?v=JJjt3hZ0sxQ&index=6&list=PLdHRde086EhLm33_kGDOLyGPiVl_ovT0b

Other good ones are Captain Stephen Harper and the Good Ship Hypocrite ... https://www.youtube.com/watch?v=wMmSKY3Gxdo&index=2&list=PLdHRde086EhLm33_kGDOLyGPiVl_ovT0b

The perfect example of Harper's bullying the Public Service except this time the whole country gets to see it.
I've learned that it can a long time to defeat a bully and when it happens it is so sweet. October 19th will be a sweet day indeed.
JD

A friend phoned to tell me about the 'SONG": I goggled it and had a great laugh! I can play it on my iphone when I'm driving. I want to buy the record, but that is dating me! This could be the song of the election campaign. we could set up regional choirs and go along and sing it to all con candidates.

Cons in just another attempt to silence scientists. by suspending this writers/scientist/singer the Cons gave themselves more bad publicity than the opposition could have. A few more songs for us to sing. who says music isn't valuable? Loved the song. just perks me up no end.

How about we turn the tables and go after all the Con candidates in EVERY riding across Canada?

In the subject line of the email, type: Will ____________ be attending all-candidates meetings/forums/debates and be speaking to media during the campaign?

Mention in your email that a forum and a debate and NOT the same thing. Ask the candidate if he or she would agree to participate in a series of meetings over the next several weeks, with topics including:

Ask specifically if the candidate would agree to participate in one or more formal DEBATES with the other candidates.

In the body of your email, suggest that these meetings/forums/debates could also be live streamed on the local cable channel, a radio station, and other media platforms, so that people who cannot attend can watch online, with the events archived for later review.

A very short time after I did this, the Con candidate responded to my email (but did NOT include the members of the media). He said in part: "The PM has not prevented me from speaking to the media and I will be attending several forums during this election campaign as I have in previous elections."

Notice he did not mention debates. I then sent my response to him AND the members of the media.

Then I spotted this:

Is Harper and the PMO afraid the Con candidates "are just not ready" to meet the press and the public? 8-)

I Want My Canada Back! - Raffi
https://www.youtube.com/watch?v=NMnxSAHgBc4

Which Side Are You On? - Jackson Browne
https://www.youtube.com/watch?v=RCHLWLwOAh0

Who owns the elections? Who profits either way?
Who ends up with all that money politicians pay?
To be the fearless leader, to put themselves across
To be the one entrusted with the profit and the loss
You try hard to believe that when you cast your vote it counts
But elections are won with money in ever larger amounts
Take the money out of politics and maybe we might see
This country turn back into something more like democracy

For What It's Worth by Young Medicine Ft. Trent Agecoutay
https://www.youtube.com/watch?v=J9Tn2FedfwQ

hi Stew...yes apparently our Great Fearless Closet Leader feels threatened by a man who studies bird migration patterns and a gentle song like that one. It's absolutely pathetic...

hi JD...yes indeed, defeating bully can be so satisfying. I've fought them all my life and I've beaten up more than one...hundred. ;) I'm sick and tired of bullies running wild in our government, and now we're all going to teach them a lesson...

hi Punned it...thanks for those excellent suggestions. I think that's what we missing to put some life in this campaign. Some great protest songs. I play the guitar and sing, and am debating whether to make one too. Although with my voice it might not help our cause... ;)

hi e.a.f...yes it is a catchy song isn't it? And it's growing by leaps and bounds. It has more than tripled its number of views in one day. So thank you Stephen harper !!!

hi David...yes what a good idea and good for you for flushing out a Con like a partridge. A con left some propaganda under my door today,. And after reading it I've decided I DON'T want to hear from her...:)

hi David...thanks for your excellent list, I'm sure I'll be playing a lot of them before this campaign is over. Readers of this blog owe you a vote of thanks for all the great research you offer them. There are more facts in the comments than there are in my posts. What? You're fired !!!!! ;)

One more thing. If people go forward with this strategy to flush out Cons, and they get a response from the Con candidate, forward the response to the two Toronto Star journalists who broke the story: