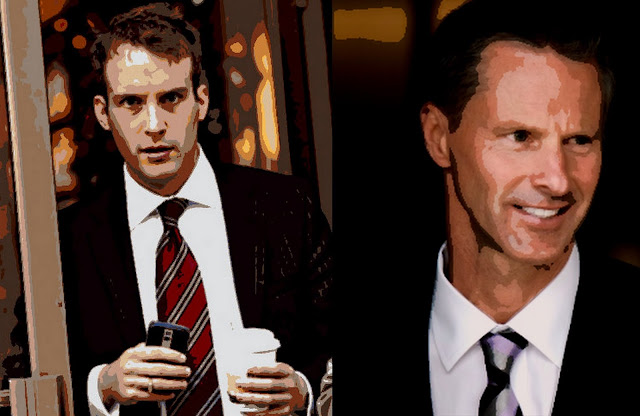 The Con conspiracy has finally been exposed.

It now seems that Ray Novak, Harper's beloved Chief of Staff, knew all about Nigel Wright's payment to Mike Duffy.

Stephen Harper’s close aide Ray Novak was in the room when former chief of staff Nigel Wright revealed he had picked up the $90,000 tab for Mike Duffy’s expenses, according to a statement by a former PMO lawyer read in court.

Mr. Novak, now Mr. Harper’s chief of staff, has said he did not know that Mr. Wright had paid the money until it was publicly revealed in May, 2013.

At least according to what Benjamin Perrin, Harper's former lawyer, told the RCMP. 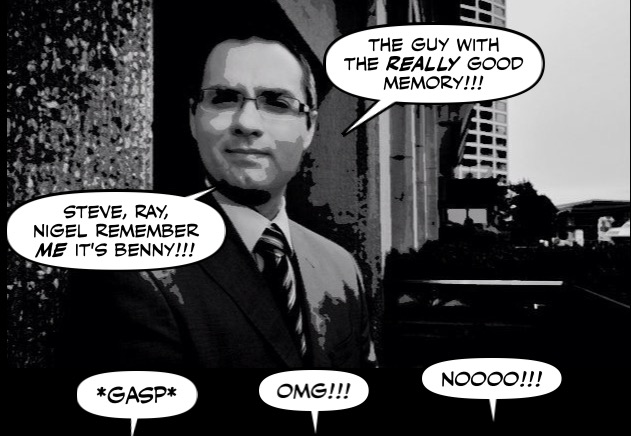 “Ray was in that meeting and Ray heard this, and I remember looking at Ray for his reaction,” Mr. Perrin told the RCMP, according to the statement Mr. Bayne read in court.

Mr. Perrin added he was “shocked” when RCMP documents were made public which listed people who were aware of Mr. Wright’s payment, but did not include Mr. Novak.

Which not only makes Novak look bad, it makes the religious fanatic Nigel Wright look even worse than Ol' Duff... 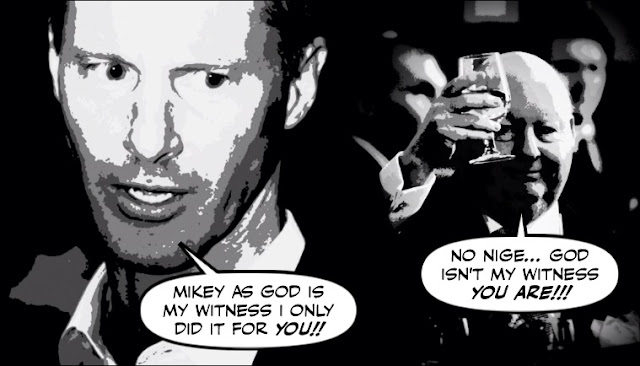 Mr. Bayne read the statement in his cross-examination of Mr. Wright, who had testified that Mr. Novak had only been in the meeting in question part of the time.

It also makes you wonder who has REALLY been running the PMO?

Mr. Wright also revealed during his testimony that he has been in touch with Mr. Novak since leaving the Prime Minister’s Office – and the last time about two weeks ago when they exchanged messages by instant-messenging.

And makes Wright's claims that he did not ask the Con bagman Irving Gerstein to try to influence the results of a supposedly independent audit, look even more dubious. 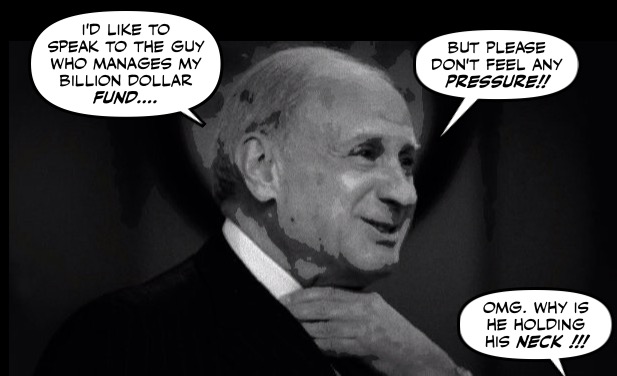 Mr. Wright testified he only wanted Mr. Gerstein to connect Deloitte auditors with the Senate administration, or the head of the committee that ordered their audit, Senator David Tkachuk.

But Mr. Bayne noted Mr. Wright had outlined in emails the outcome that he wanted: Deloitte could add up the sums Mr. Duffy might owe if his primary residence was not in PEI, as he had claimed – but not opine on whether it was his actual primary residence.

Which has the NDP wondering why the RCMP didn't charge Wright and others in the PMO, for their part in that obvious cover up.

The NDP wants the RCMP to consider laying charges against Nigel Wright and up to a dozen other staffers in the Prime Minister's Office for their part in covering up the scandal over Sen. Mike Duffy's expenses.

Which can only embarrass Ol' Nige further. If that's possible eh?

But of course the one most embarrassed by these scandalous new revelations is Stephen Harper.

Who must now decide among other things whether to fire Ray Novak... 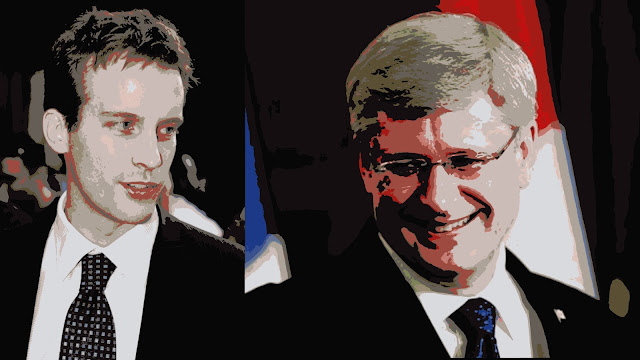 Like the former Con Brent Rathgeber suggests he will...

But as we know that won't be easy, because Batty Harper and his Robin have a very special relationship.

At 38, Novak has spent much of his working life involved in Harper’s political career. Indeed, a decade ago he lived in a one-bedroom apartment over the garage at Stornoway when Harper was Opposition leader. He has been described as part of the Harper family, being particularly close to the prime minister’s children, Ben and Rachel.

Which is no doubt being SEVERELY tested... 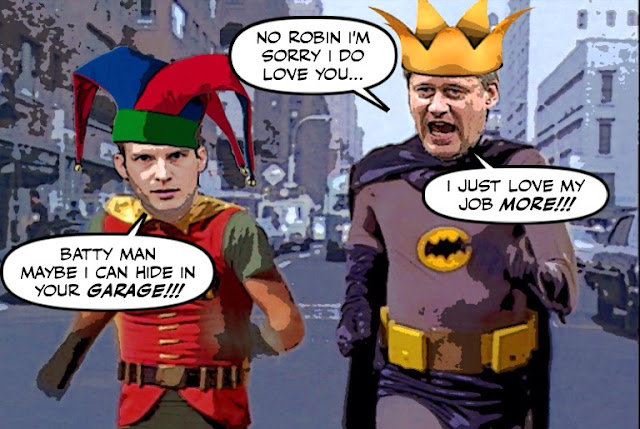 Especially since EVERYBODY knows that if Ray knows ANYTHING so does Steve.

But in the meantime I'm happy to report, all those scandals along with this ugly incident.

Have derailed the Con campaign...

Or swallowed it up... 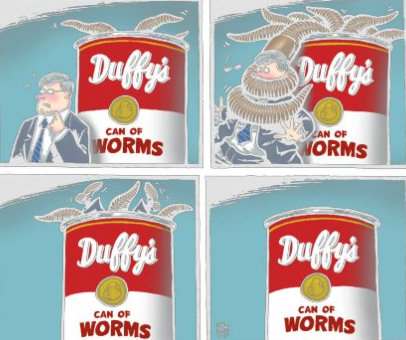 And yes, as I said on Twitter, sometimes it all comes together... 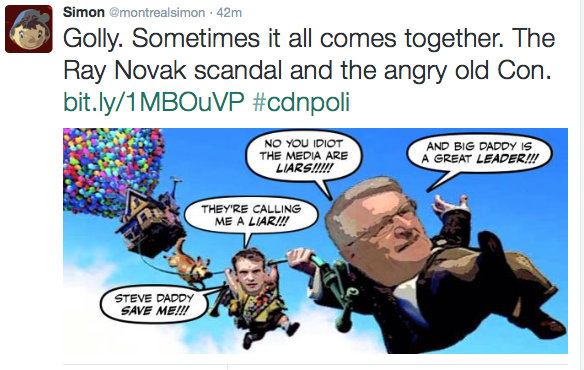 The Con balloons are popping.

Great Leader is heading for a hard landing.

The Duffy scandal has come back to bite him.

And it WILL help us destroy him... 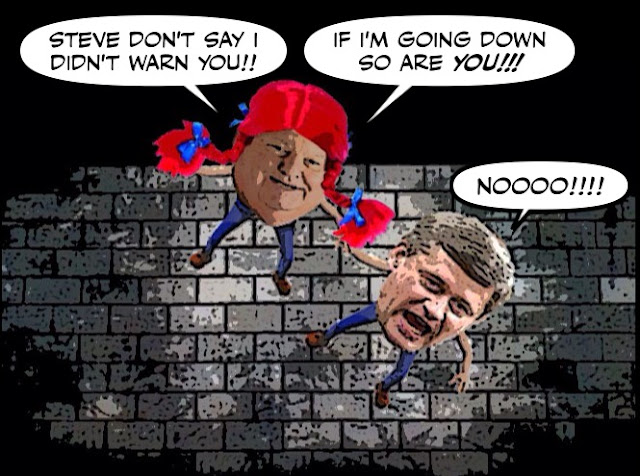 A bit off topic but. Harper rubbed the noses of British Columbians in it when he appointed Gordon Campbell to high commissioner in England. We don't forget out here..

The angry old white man from yesterday's press conference really proves to me that there are MANY maniacs in the Conservative wings that would sooner cut off both their nuts, stuff them down their own throats and ... well do other gross things before they would NOT vote Conservative. We now see it`s a sickness that has no cure, regardless of how embarrassing, corrupt and vile the Stephen Harper Conservatives are.

And yet, they`ll still steal the election in October. What do we do?

This sorry mess is really approaching Rob Ford proportions on the national stage embarrassment scale. Maybe it really was a good thing that great POS leader called the election when he did so that he would have to expose the inner workings of his corrupt regime in the middle of the campaign. Canadians really should be asking some tough questions about how people like these dregs can be in charge of our nation and that we let that happen. We should also be fully aware about how crazy religion motivates the likes of Wright, Harper and Novak and that these will use it as a get out of jail free card. Will be truly wonderful to see this Novak kid on the stand, he's obviously not as brilliant as he wants us to believe.

And these same felonious bastards that are ruining our country are also directly responsible for the collusion with the oil companies that run our government for the artificially high prices at the gas pumps these days what with crude costing less than $41 a barrel as we speak. When will Canadians realize that enough really is enough?

Clearly. That's why the NDP won the last election......oh wait, they got crushed.

We get out and vote and show all party's that this shit will no longer be tolerated by the Canadian public.

The one theme that runs through these appointments, non-firings and the early election call. Stephen Harper's judgement. He might just lose this thing in spite of Mulcair and Trudeau buying in to the vote -splitting brain-fuck.

I'd like to see Michael Runia called for the Duffy trial.

The crime minister needs to go straight to jail ... HE cannot pass "GO" and he cannot collect $200 either ... like a typical sociopath, and pathological LIAR ... HE blames everyone else ... the POS term, his minion hurled at the MEDIA should have been directed at the fools "LEADER" ... absolutely PATHETIC ... TY

Nobody is thinking of that out here.

Ray! Nigel! Your ride is here! Jump on under.

Hi bcwaterboy...yes I am glad Harper launched himself into the heart of the Duffy trial. However I don't believe that Novak will be called to testify. I think Bayne plans to use Perrin to reinforce the idea that both Wright and Novak lied. But I hope I'm wrong because it would be really interesting....

Hi anon....Canadians now have only sixty days to realize that enough is enough, and do something about it. For they won't get a second chance,,,,

My guess would be a loyal believer, powered by his strong religious views. Or to put it crudely a monk in a whore house,,,,

Hi John....I agree, it all feeds into the same big picture. And all those examples of Harper's appalling judgement can only fuel the desire for change....