The Passion of Nigel Wright and the Depravity of Jesus Harper 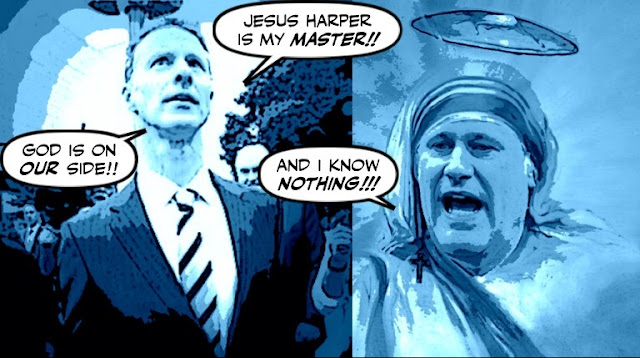 It couldn't be a more outrageous statement, or if you are a Christian a more blasphemous one.

But there was Jesus Harper's fallen but still faithful disciple Nigel Wright, citing the   Bible to defend his actions in the Mike Duffy scandal.

A star witness of the Mike Duffy trial cited a Bible passage to explain a “for you only” comment he made in an email about who paid the embattled senator’s bills.

“Yes, my view, I think I mentioned yesterday, my view is it was I was helping out, I was doing a good deed and sort of Matthew 6, right?" said Nigel Wright to an Ottawa courtroom on Thursday. “This is, you should do these things quietly and not let your left hand know what the right hand is doing.”

Even though that Biblical passage is clearly aimed at those who would help the needy, not porky Con Senators who make more than $140,000 a year.

And is definitely not intended to encourage those who would try to cover up a sordid scandal for crass political purposes.

For which Wright was duly flogged by Duffy's lawyer Donald Bayne.

Prime Minister Stephen Harper’s former chief of staff had no altruistic motives when he handled the Mike Duffy expenses scandal but was engaged in classic political damage control in an effort to protect his boss, Duffy’s lawyer alleged Thursday.

Far from being a “good deed,” said the lawyer, the repayment scheme was a deliberate attempt to deceive Canadians by pretending that Duffy had repaid the expenses himself when Duffy had insisted from the outset that he had done nothing wrong.

But then who could be surprised when Wright was working for Jesus Harper?

The most depraved leader of the most degenerate cult this country has ever known. 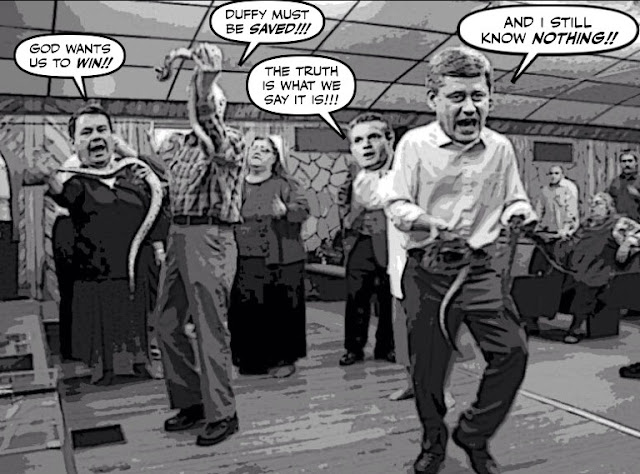 Who was also having trouble yesterday trying to explain why Wright's story and his story don't seem to match when it comes to the matter of who knew what when?

Conservative Leader Stephen Harper is dodging an apparent incongruity between his own narrative around the repayment of Senator Mike Duffy’s questionable living expenses and an e-mail written by Nigel Wright, Mr. Harper’s former chief of staff, who dipped into his own bank account to ensure that the money was refunded.

In one of them, written May 14, 2013, to a press attaché, Mr. Wright says, “The PM knows, in broad terms only, that I personally assisted Duffy when I was getting him to agree to repay the expenses.”

Mr. Harper has always insisted he did not know until May 15, 2013 – the day after that e-mail was written – that anyone but Mr. Duffy had reimbursed the government for the more than $90,000 in expenses.

Which could mean big trouble for Harper down the road, if Duffy's lawyer should decide that he should be subpoenaed to explain that unfortunate discrepancy. 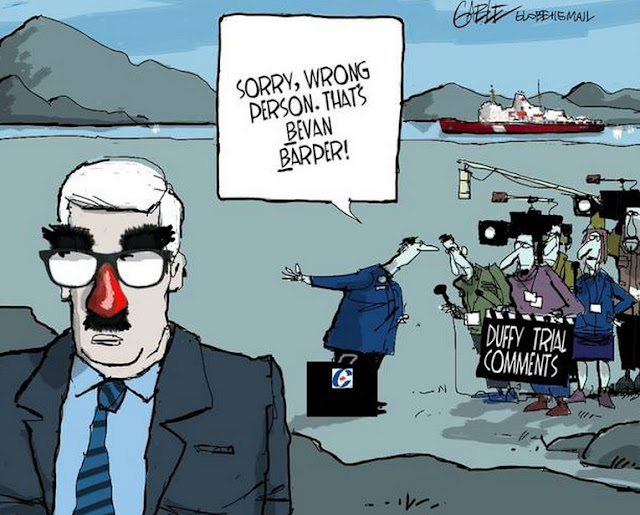 For as I'm sure you know, he is heading for the North Pole to try to get away from all those embarrassing questions. 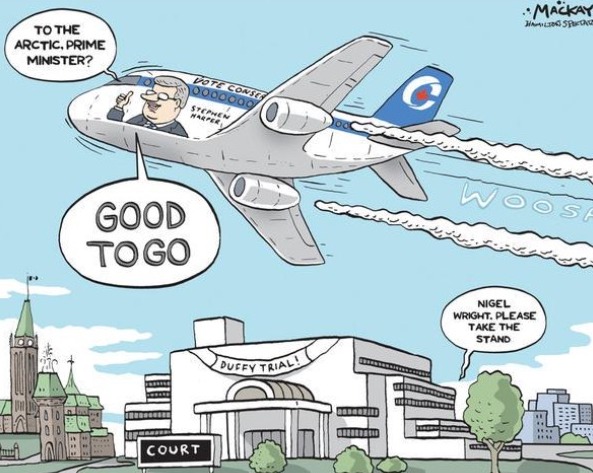 But while he can run he will not be able to escape that sordid scandal. Because what is clear already is that he did put the narrow interests of his party before the public trust.

Conservative Leader Stephen Harper may not have known about every seamy detail in his party’s scramble to contain the Mike Duffy scandal. But he knew plenty. The highest political office in the land, under Harper’s direct control, was consumed with putting partisan Tory interest ahead of the public trust.

What's left of his reputation is taking a beating... 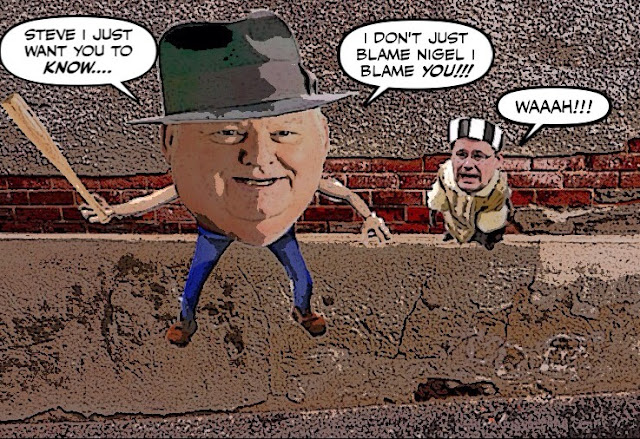 This PMO pressure, misrepresentation and manipulation shreds Harper’s credibility as the politician Canadians could trust to “clean house,” as he put it shortly after being elected in 2006. He promised an end to the era “of dark little secrets” and “a culture centred on accountability… integrity and transparency.”

Wright’s testimony underscores the extent to which the Conservatives have betrayed the public’s trust, blackened their government record and debased their brand.

And with Duffy's lawyer promising to give the religious fanatic Nigel Wright a really hard time. And the prospect of his present Chief of Staff, his beloved Ray Novak, being asked to explain why he was in the loop.

Top members of Stephen Harper's campaign team, including the most senior staffer in the Prime Minister's Office, were among those told in 2013 that Sen. Mike Duffy didn't pay back his own contested expenses.

But the circle of key advisers kept their lips sealed, even as cabinet ministers told the House of Commons that Duffy had "shown leadership," or that chief of staff Nigel Wright "was the only one involved."

Ray Novak, Harper's current chief of staff, had been told in a direct email that his predecessor, Wright, was preparing to repay $90,000 in Duffy's Senate claims. Among all of Harper's aides, Novak is the longest serving and closest to him personally

But somehow forgot to tell Con cabinet ministers, and his adored Batty Man ANYTHING... 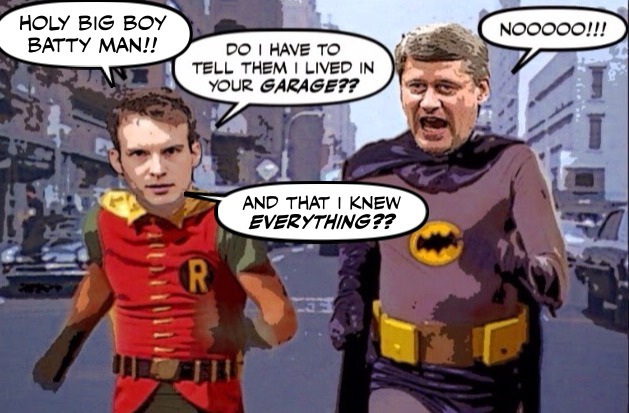 Which could be REALLY embarrassing.

So the scandal Jesus Harper once thought he could bury.

Can only get bigger.

And could very well end up burying or crucifying him instead... 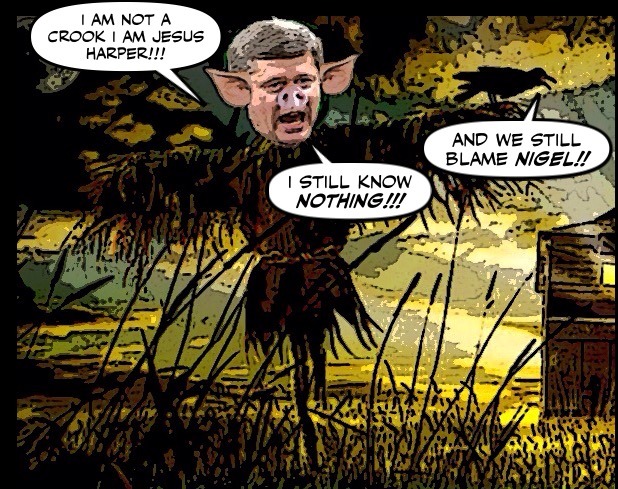 Jesus Fucking Christ, now Nigel and his Reformist friends want to drag our Lord into this mess?

Wright should know that it is a sin to take the name of the Lord in vain, eh? Apparently paying Duffy off to get him to admit that he had made a mistake so that it saves his boss, the CPCJesus, and his political party. It is blasphemous for Wright to then claim that he was simply doing a good Christian deed. The real Jesus, I suspect, would not have approved.

quoting the bible no less. how crazy are these people? What is this religion they belong to, the Christian and missionary alliance? They believe the bible is inerrant and the second coming is imminent. They sound as crazy as a bunch of shit house rats. This guy was part of a cabal which ran our country right into the ground. Stevie believes the Taliban are a bad bunch, well I think Steve and his co horts are some what like the taliban when it comes to religion. Lets hope they all get over it.

And if you can "unblock" the full episode of CTV's Power Play (Aug. 13)

I hope Duffy's lawyer reminds Wright of some other Bible verses:

Matthew 10: 26-27 “..... for there is nothing concealed that will not be disclosed, or hidden that will not be made known. What I tell you in the dark, speak in the daylight; what is whispered in your ear, proclaim from the roofs."

"It's been a tough go lately, I hate choosing sides
What we do in the darkness will come to light"

You know why Harper went North, the press can not afford to follow him.

Why is nobody asking the obvious question. Nigel gave duffy the money. Duffy charged with Bribery ofence. Nigel Imacculate.

Just the note to sent to the PM and members of the PMO.

And the BIGGIE: "Thou shalt not bear false witness against thy neighbour".

For the new proposal Wright says they will fix a special committee with the right members to pass it, if the regular committee didn't have the right membership. He wrote they couldn't rely on LeBreton's office to get it done.
And, 'we'll have to do his in a way that does not lead to he Chinese water torture of new facts in he public domain, that the PM does. It want.'
Bayne suggests the Duffy issue picked up in February and that's what led the PMO to start dealing with it.
'That's not the language of doing he right thing. That's not Matthew, that's ending political suffering,' asserts Bayne (referring to Wright's mention of Matthew 6 in the bible the other day,)
'That's issues management,' says Wright.

Simon: That photo with the snakes. I'd be terribly concerned for the snakes' health if they bit anyone of those people in self defence.

At present, there are only 3 members of the press travelling with Harper.

I think Wright wasn't charged because the RCMP say there was no "criminal intent" on Wright's part.
Whatever that means.