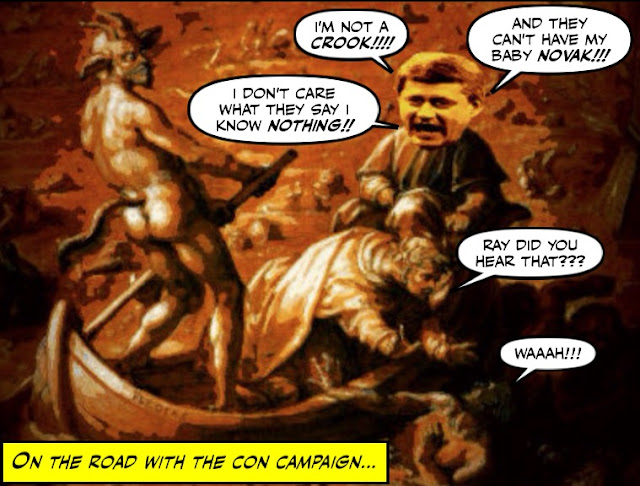 I can only imagine Stephen Harper's state of mind,  after what must have been for him a week in the hell of his own making.

For it was the week the Duffy scandal shredded what was left of his credibility. The week his campaign went off the rails.

The week that revealed the ugly face of his angry old Con base... 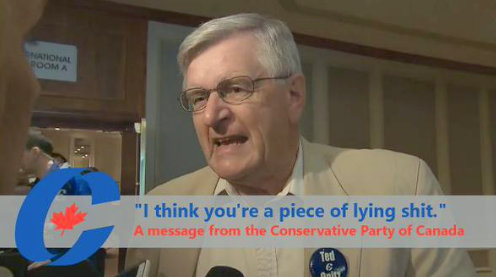 Stephen Harper's promise to spend $15 million to protect salmon habitats was overshadowed on Friday by a complaint from Scouts Canada officials who said they didn't agree to have some of their young members stand in uniform next to the Conservative leader.

For he will use ANYONE for crass political purposes. 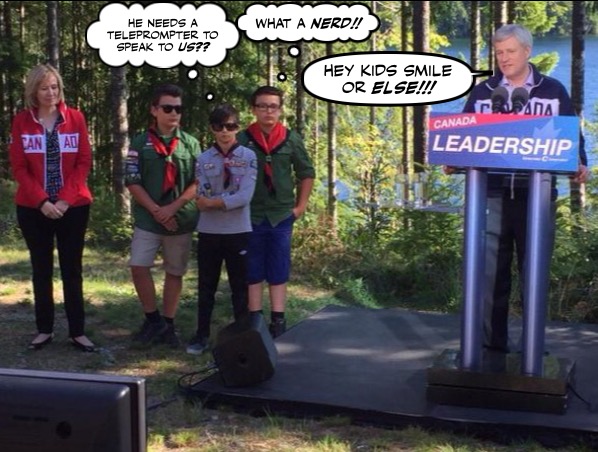 CTV News has learned the Scouts Canada leader who gave the okay for troops to be used in a photo-op alongside Conservative Leader Stephen Harper was a known Conservative supporter.

And he does corrupt EVERYTHING he touches.

But of course the greatest damage to his already soiled reputation came at the Duffy trial.

Where the great Donald Bayne assembled some of the missing pieces of the puzzle... 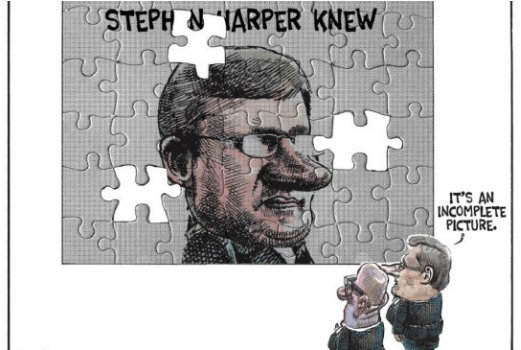 To reveal the monstrous face of an unmistakable cover-up... 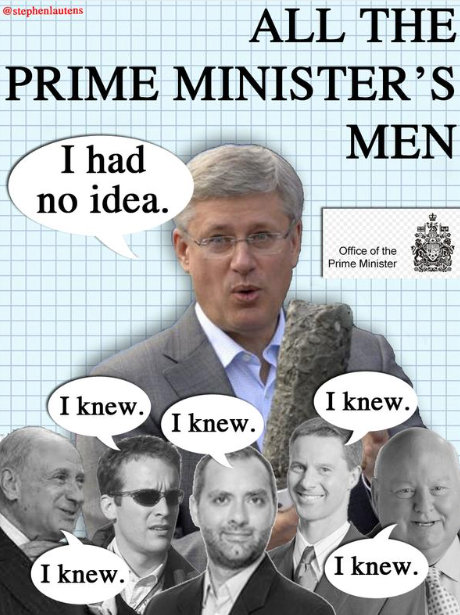 Which has not only has made his claim that he knew NOTHING sound criminally absurd.

It has reduced his beloved aide Ray Novak to a shadowy presence on the campaign trail. Kept far from reporters and cameras...

While his depraved Big Daddy agonizes over whether he should fire him.

And the whole sordid scandal is having a measurable and potentially devastating impact.

Days of bombshell revelations and conflicting testimony over who in Prime Minister Stephen Harper’s inner circle knew what, and when, regarding the Mike Duffy Senate expense affair, are bringing bad news to the fight to lock in “soft” Conservative voters in the midst of a federal election campaign.

Three-in-five Canadians (59%) say they don’t believe Stephen Harper’s version of events This includes one-in-five (23%) voters leaning towards but not yet totally committed to the Conservative Party of Canada (CPC) when it comes to their voting intention on October 19th.

More generally, a majority of all uncommitted voters (59%) reject the Prime Minister’s account.

Most Canadians don't believe his ridiculous story, and it is colouring or reinforcing their views of him and his morally corrupt regime.

When asked to choose between framing the Duffy trial as a “distraction” from other, more important campaign issues or framing it as evidence of a deeper scandal that will become a key issue in the campaign, fully three-fifths (61%) off all respondents choose the latter.

To make matters worse, Harper can hardly hope for relief when the Duffy trial recesses at the end of next week, so he can try to portray himself as a Great Economist Leader. Again.

Not with the economy in this calamitous state.

Made worse by his criminally incompetent decision to put all our economic eggs in one oily basket, or frying pan... 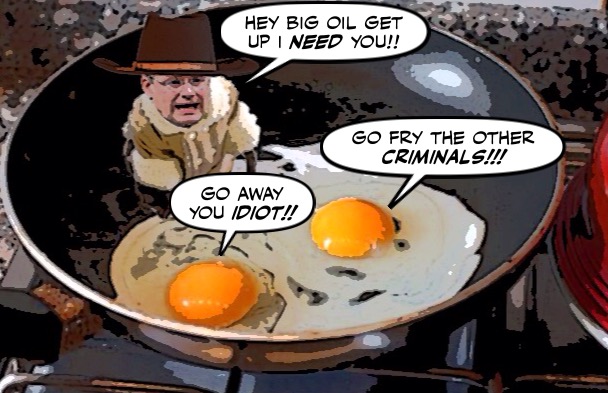 And not when his new/old Great War on Crime and his fascist Life Means Life slogan rings so hollow.

Like much of Harper’s “tough on crime” agenda, it sounds reasonable, or at least hard to argue against. After all, who much cares about the fate of the very worst criminals? In reality, though, like much of the government’s litany of harsh crime laws, this legislation would have almost no impact on crime and amounts to little more than a political gesture.

Which leaves the Con campaign running on fumes, and no doubt praying for a terrorist attack. 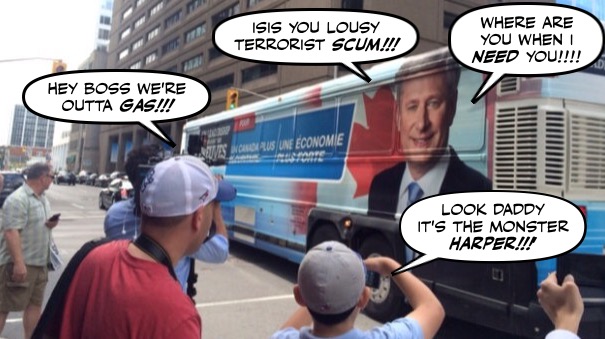 And the best news? The CBC's latest poll tracker shows the progressive parties heading for victory... 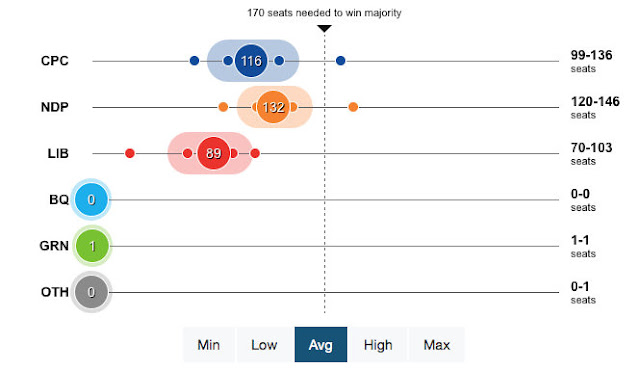 So Harper's week in hell couldn't be better for our side. Or come at a better time for me.

For I have to admit that I am so sick of living in this foul stinky Harperland.

I need to feel the clean fresh wind of change and freedom blowing in my face. While the summer is still here, and before the final battle for Canada begins.

So you know where I'll be today and tomorrow... 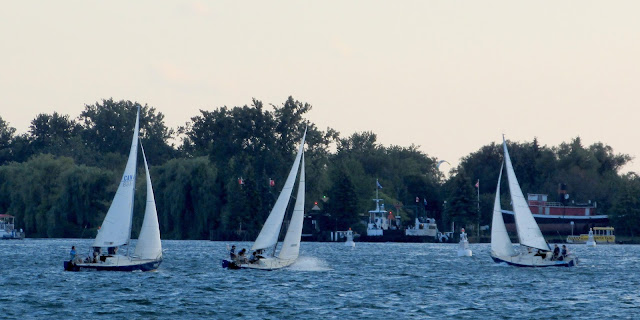 May the winds of change raise your hopes for a better future.

Meh... The election is still months away.

Everybody will have forgotten about this little blip by the time October comes around.

Duffy who? Wright what? Novak knew?

Stop living in the past: Steve is the future!

I like how he goes out to the west coast and throws them millions. He has gutted the fisheries and navigations regulations, shut down sections of the fisheries and oceans department and closed the Vancouver coast guard station. No wonder he has millions to throw. And he does throw millions where ever he goes. Here you people, this is what I am giving you of your own money for your vote.

"The CBC's latest poll tracker shows the progressive parties heading for victory..."
What is with you people and the plurality statement regarding progressive "parties"?
Since when did the corporate lapdogs known as "liberals" EVER evidence anything even remotely similar to be "progressive"? Even the real Republican Party in the States is more progressive than they are! Get a grip!
The only "party" up here that even has a remote semblance to a "progressive party" is the NDP which itself has become a centrist-at-best organization under former "liberal" Mulcair's fine leadership. Layton must be spinning in his grave right now! Call a spade a spade, Simon, and stop trying to make the likes of wynne and her fascist pals seem to be "progressive". There are 2 (count them) fascist/corpratist/"conservative" parties in Canada and one pseudo-"progressive" party here. The only thing that actually comes close to a liberal party is the Greens and they don't stand a chance in hell of beating anybody else in this election so they don't even count. I'm just tired of people trying to make trudy and his band of libero-cons sound like anything other than the right wing shills that they really are. Check out the story that's not being told about wynne and bruce power and also not prosecuting mcguilty for his egregious crimes against Ontario and what happened to insurance rates coming down and what happened to the stabilization/reduction of energy rates here in Ontario (the highest in the nation?)? How is any of that "progressive", Simon?

I'm sure that some of the one-time Con supporters will fall away...but where will they go? To Junior, of course, to Con-lite..after all, he supported C-51, the kiss of death for any progressive who may have been considering, Trudeau, but should have known better...
A few of Harper's disillusioned old fossils will go to the Libs, which does nothing for the only party worth supporting, even if I sometimes have to hold my nose to do it..

That's not the way it works. The seed has been planted and even if details become blurred in voters minds the impression of the reformatory hairpiece as compulsive liar will linger. Everything he says from now on will be seen through through a lens of mistrust.

The future death of our country and all that we know is Canadian.

Hey Simon: I see Ivison has already been here and said what he said in the Nat. Con-Post a few days ago that voters would have forgotten Duffy by the time the campaign begins. At least that appears to be what he is hoping, eh?

hi anon 8:38...keep whistling in the dark, but I think you're missing the point. It's not about Duffy Who? Wright what? It's the political perception that counts. Harper's image and credibility are being severely damaged, and that WILL hurt him in October...

hi anon...yes the way he is throwing away OUR money trying to buy votes is scandalous. They don't even have a surplus, and they're burdening the next government with unnecessary bills. The opposition parties need to make clear what those Con artists are doing...

hi anon...look I am further to the left of any party in Canada, so if I was literal I'd have to call them all right-wing parties. But I live in Canada which is a far more conservative country than most people imagine, so I have to deal with reality. The only thing I am interested in now is defeating the Harper Cons, because ANY opposition party is better than them, and more progressive. I don't sit around counting how many angels fit on the head of a pin. And any enemy of my enemy is my friend...

hi mizdarlin...some Con supporters may go to the Liberals, but polls show that a surprising number are going to the NDP. And I should add also show that those gross anti-Trudeau Con ads are driving many Liberals to the NDP. So it's more complicated than you imagine. Unless either the NDP or the Liberals get a majority, which seems at this point unlikely, the two parties will have to work with each other whether they like it or not...

hi anon...well it's true that he did say that a few days ago, but in his latest article he says exactly the opposite. Now he says the Duffy trial does matter and it could hurt the Cons. Poor old John he must be spinning like a top...

hi rumleyfips...yes I agree with you, the Senate revelations are only reinforcing negative views of Harper and his Con regime. Most Canadians didn't trust them before, and what's been revealed will make them trust the Cons even less....

hi anon...OMG that's what I would call stretching a point. I live in the neighbourhood where the Blue Jays play and I see the growing excitement and the larger crowds. But I don't see that having any effect on the election. I am however worried that columns like that one, could jinx the team... ;)

you are so correct. And like always, can you really trust a "liar"? He makes promises, but one back in office what will he really do? Will he remember the tax "breaks" he "promised' or will it be back to basics, such as auditing charities he doesn't like, appointing "friends" and such to positions which they will abuse?

This is the P.M. who gutted the Vets rights, then when they started dying/killing themselves at such a rate the MSM started to notice, he promised changes. yes, promised. None of them would take affect, according to his promises until after he would be re-elected. Between the date of his promises and them taking effect, how many more Veterans will kill themselves? How many of their families will become too exhausted to deal with all the problems?

I'd rather trust a meth dealer than this P.M.