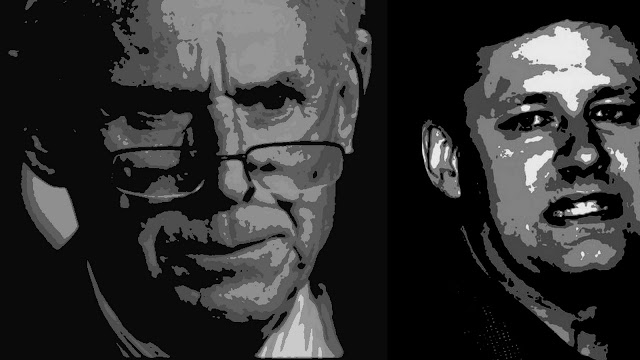 Ever since the trial of Mike Duffy began, his lawyer Donald Bayne has been circling over Stephen Harper, like a hawk over a rabbit.

But today all that changed.

When Bayne swooped out of the sky, and went in for the kill.

Mike Duffy's lawyer ripped into Nigel Wright in court on Friday, accusing the prime minister's former chief of staff of planning to deceive Canadians with a scheme to secretly use a Conservative Party fund to pay off inappropriate living expenses claimed by the senator.

"You go secretly to the chair of the Conservative fund," Duffy's lawyer Donald Bayne said. "You use public funds and taxpayer donor funds secretly to arrange to have the fund pay it without telling Canadians. And you think that was principled and ethical to do?"

And then he went after Harper himself  in the most devastating way possible.

At the end of the most politically charged week of Mike Duffy’s trial over the administrative and political saga of his Senate expenses, defence lawyer Donald Bayne went out of his way to establish that the damage-control operation led by the Prime Minister’s Office to defuse the scandal was conducted with the knowledge of Stephen Harper himself. 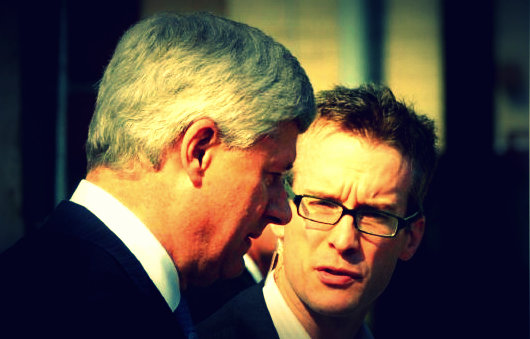 Cross-examining former Harper chief of staff Nigel Wright for the third day running over his role in the crisis management effort, Bayne suggested Friday that Ray Novak, then Harper’s principal secretary and later Wright’s successor, acted as a surrogate for Harper during secret negotiations about stage-managing Duffy’s repayment of his disallowed expenses.

“Ray Novak was a stand-in for the prime minister, wasn’t he?” asked Bayne.

And the reason it's so devastating is because Novak is so close to Harper.


“Ray was with him more than anybody else for years and years and years,” says Brodie, who served as Harper’s chief of staff for three years. “They were literally hardly ever apart.”

That if he knew about Wright's plan to cover-up a scandal, as we now know he did, you can be sure that so did Great Leader.

No matter what he says.

Despite Novak’s involvement in several email chains about how to fix the Duffy mess, Harper, speaking Friday at a campaign stop at Hay River, N.W.T., didn’t directly address the matter of Novak’s prior knowledge of Wright’s repayment.

Referring to Novak as a “subordinate” — because in the early spring of 2013 Novak was below Wright in the PMO hierarchy — Harper said, “You hold people responsible for their own actions; you certainly don’t hold subordinates responsible for the actions of their superiors.”

And since Novak is the one person Harper will not throw under the wheels of his bus. 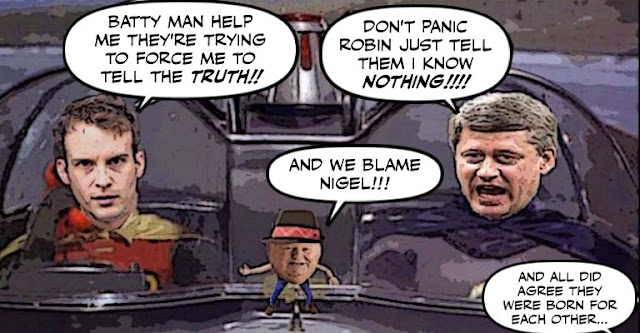 With a little bit of luck they'll both go off the cliff together.

The Duffy scandal has finally penetrated the inner circle of the Con regime.

I don't think Harper has any plans to cut Novak loose. But if Harper continues to be dogged at every campaign stop with questions about Novak, and Harper's national poll numbers (re: leadership) start to tank, he may feel he has to. Novak himself may be asked by the judge to appear in court. Then Harper? 8-)

then click on the "Con class photo" to enlarge

I worry somehow that even with all of this douche-baggery, Harper will still (a) walk and (even more frightening) (b) win the election.
Our mission for the next few weeks: find the 30% that think Harper is OK and convince them what a scum bag he is. If we don't we'll lose Canada.

I think Nigel Wright's use of the term Chinese water torture is very apt. He just used it too soon.

I loved Kory Teneycke's statement that Novak did not read Wright's email about the cheque. Let me see, the Chief of Staff to the Prime Minister and, at least nominally your boss, sends you an email about an evolving scandal affecting the PM and you don't bother to read it. Yep, of course I believe Kory.

Excuse me, I have to go see a man about a bridge. And while Harper, of course, is loyal to his people, I'd suggest Mr. Novak check his insurance policies and health coverage before walking near the campaign bus.

It is a well documented scheme to pay a senator in order to make a problem go away. The senator has been charged with bribery but no one else is named.This and the documented fact they conspired to interfere with an independent senate audit points to a justice system where certain evidence is ignored and Duffy is charged while others are not. Possibly it was simply an error in judgement but it could have much larger implications when it comes to matters of public and national security. Time will tell but surprising there is no pressure to reopen the case.
RT

"...You hold people responsible for their own actions; you certainly don’t hold subordinates responsible for the actions of their superiors.” okay, Harper, if we continue with that sort of rationale then that means that Nigel Wright, your subordinate at that time, should not be held responsible for the actions you must have signed off on, since you are too much of a control freak to let something like this big ol' cheque to cover Duffy's sins go by without your approval...problem solved..
Mulcair is right..Nigel Wright is on the stand, but Harper is on trial...

If the Con government is defeated in the Oct. 19 (it's starting to look that way, but anything's possible) I hope the new government recommends Donald Bayne for the Order of Canada-- for his service to our nation by exposing the rot of the Harper regime.

I agree. Donald Bayne may do what the MSM and opposition haven't had the guts to do, expose Harpers authoritarian agenda and how he has destroyed our democracy so far. If Canadians start to see how corruot Harper really is, because what Donald Bayne's questions reveal, the he deserves medal.

The vast majority of Harper's 30% base are fiercely loyal and turn out to vote. It is really a waste of time to try to convince them.

Better to encourage the youth of our country to get off their butts and vote. The Con regime would go down to a resounding defeat if the 5.5 million Millennials voted.

hi anon...Harper will never cut Ray Novak loose. The two men are too close. Which is why the more pressure on Harper to fire Novak the more damage we will do him. Also, if I remember correctly,Novak is due to testify at the Duffy trial, so that should be really entertaining....

hi anon...I follow Alison's blog closely, and from time to time I run her list of Con perps. It's the best collection on the internet...

hi anon 9:03...Harper's base has been shrinking. That's why he has been forced to spend so much time trying to pleasure them. And even if by chance he does manage to hold on to them. They are only 30% or less, and if we vote intelligently we can still defeat them...

Hi David.... I don't agree that trying to reach out to Harper's base is a waste of time. We may not convince them to join the Forces of Light, but we can help persuade them not to cast a ballot. And since Harper needs every one of those base votes it can do him great damage....

hi jrkrideau....yes I too found Teneycke's statement to be absolutely outrageous. But then he was the one who tried to convince us that the Cons were more truthful than the MSM. So that fool really must think we're idiots....

hi RT....As far as I'm concerned the evidence so far shows that a huge number of Cons in the PMO were were consumed with an attempt to cover-up a scandal, and keep Duffy from going "squirrelly" as Wright once said. Nobody can deny that now, and we should be able to take maximum advantage...

hi mizdarlin...absolutely, Harper's argument makes no sense, if you do the crime you must do the time. Or is he suggesting that all those Nazis shouldn't have been prosecuted for claiming that they were just following orders? And yes, Mulcair is right, this is also the trial of Stephen harper....

hi anon...yes I would second that. The way Bayne went after Wright for claiming he paid Duffy for altruistic reasons was a joy to behold. He is known for the way he prepares his cases, but his passion is most welcome....

This is interesting. I like the way you talk. Thanks