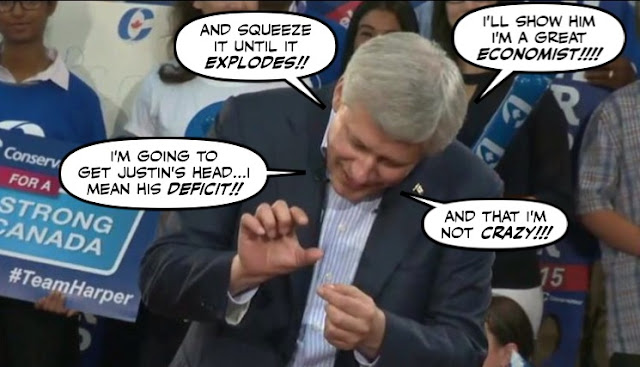 It was a shocking and deeply disturbing sight. And it could only make Canadians wonder whether Stephen Harper was still mentally fit to be Prime Minister.

For there he was today, trying to mock the size of Justin Trudeau's deficit.

But only managing to look more crazy and more desperate.

And turn his madness into a meme.

It’s definitely election season. A rare attempt by Prime Minister Stephen Harper to depart from his usual stoic public persona could become one of the most iconic meme-able moments of the election season. 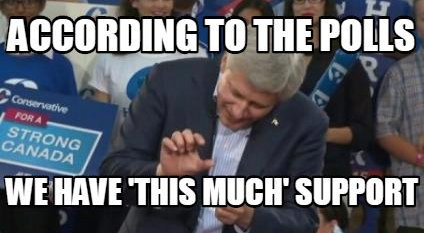 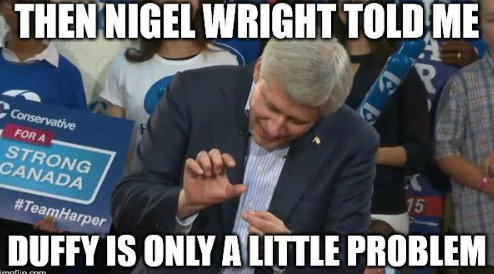 But then Harper has every reason to worry about his polls and the Duffy scandal.

For as a new Ekos poll shows he's going nowhere.

Voters are awakening from their summer slumber and noticing that they have been asked to follow what is going to be a very divisive and acrimonious campaign. At 34 points, the NDP maintains a clear and stable lead. The Conservatives, meanwhile, have dropped to 28 points. The Liberals, at 27 points, are doing much better than a month ago and are statistically tied for second place (and are not far off from the lead).

Or heading in the wrong direction. 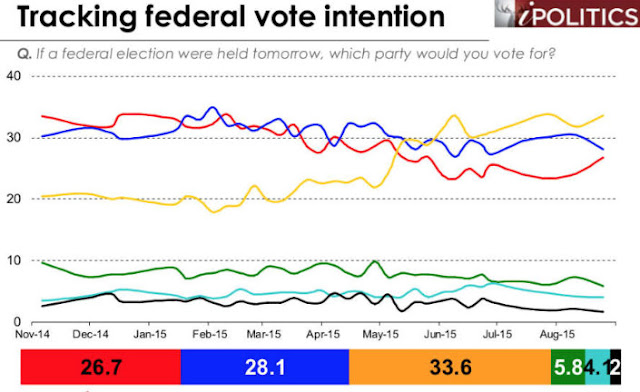 And the scandal is threatening to destroy him.

It is not the campaign that has torn voters away from their summer BBQs; it’s the ongoing Duffy scandal. Attention to the Duffy trial took off in a big way in August; most Canadians were following the trial and 29 per cent were following closely. A newly attentive public was watching this with considerable interest and the news has been all bad for Harper.

The issue has always been one of basic trust. If that is the yardstick the public are using to measure the Prime Minister on this affair, he is failing miserably. Mr. Harper could not have been clearer or more consistent in his account; he staunchly denies any prior knowledge of the affair and he maintains that Nigel Wright acted alone. However, only 21 per cent of Canadians buy his version of events and our nightly tracking suggests this figure is on a downward trend.

For if more Canadians believe Duffy than believe Harper... 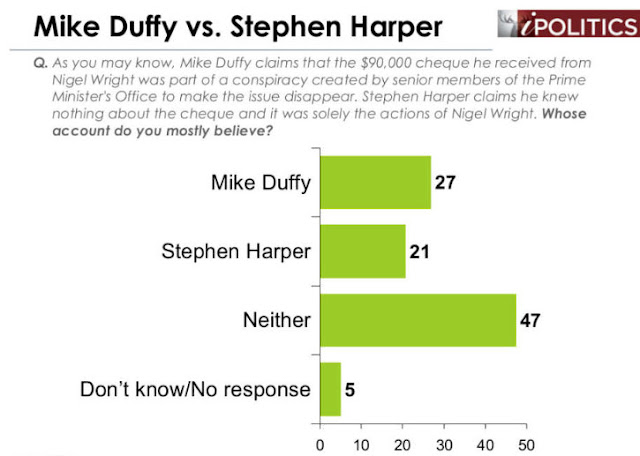 You KNOW he's in trouble.

The economy will not save him... 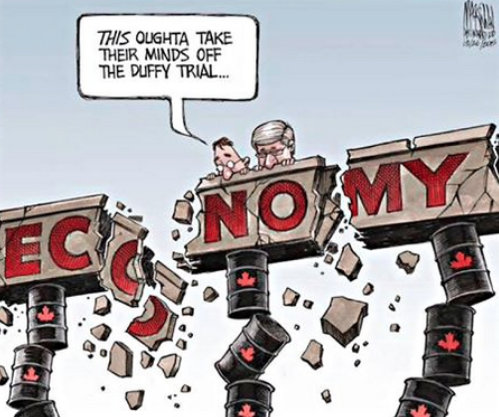 And to make matters even worse, Bruce Carson, his former close adviser, is coming back to haunt him.

Like the Ghost of Christmas Past, at the worst possible time... 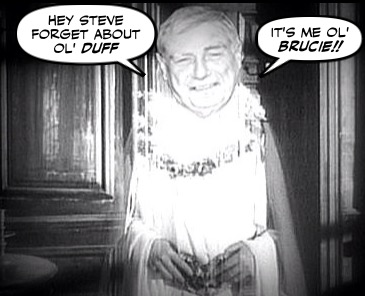 Carson's influence peddling trial begins on September 8, which can only make Harper look even more sleazy, or even more like a Con artist.

You know, last night as I left the island, a full moon was rising... 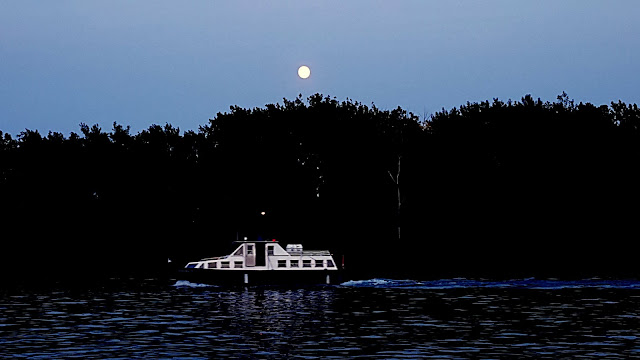 And for a moment I imagined I could hear Stephen Harper crashing around in the dark woods wailing like werewolf.

And it was music to my ears.

His scandals are coming back to haunt him and destroy him.

And the monster is almost good to GO... 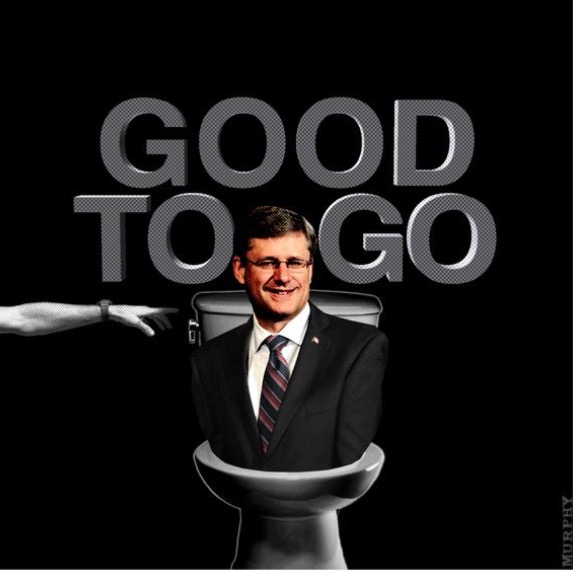 OK. Who wants to flush that toilet?

What? You ALL do?

Simon I liked the "bit" Harper did about the "deficit" regarding Trudeau's comments. it actually was funny. didn't agree with it, but it made me laugh. Had Harper and his Cons been running a campaign with a lot more laughs and out there with the public, it would be more difficult for the opposition parties to make headway in a number of areas.

I also liked your take on his "bit". Both are good and both made me laugh.

They say Steve is making more commercials right now. It maybe he was trying his new "material" out.

Do I trust Steve? No. But then I don't trust politicians. Who will make the best P.M. for Canada? A B C

If you look for it on the net, you'll find a photo of Harper, like the one at the top of this page, with a photoshopped male body part between Harper's fingers. 8-)

Harper keeps saying the election is about the economy, leadership, and security. Next week we'll probably have the official figures that show Canada IS in a recession.

He has failed miserably on the economy and leadership, so watch him pull some stunt as we get closer to voting day re: security.

Harper sure knows how to pick them! I had lost track of Bruce Carson after he got the boot for influence peddling by helping his fiancee sell water purification systems to the Aboriginal communities. His criminal past dates back to the 1980's and in addition to influence peddling he seems to have a fondness for prostitutes. A good all round Con. After leaving Harper's office he became executive director of a Calgary university based think tank: called the Canada School of Energy and the Environment which was mostly funded by a $15-million tax payer grant from the Harper government with another 25 million added later on.His first act was to alter the school's mandate to permit government lobbying and policy development on the oil sands. From there on it was all about working with big oil and the government on how to market a favorable perception about the oil sands rather than try and improve extraction/environmental technology. This guy is a real pro, the whole Duffy affair pales in comparison but it is unlikely there were thousands of emails left behind so the whole story will likely remain hidden but any snippets that do emerge will not help Honest Harp.
Rt

Here are 17 more Conservative friends of Stephen Harper now in trouble with the law
http://www.pressprogress.ca/here_are_17_more_friends_stephen_harper_who_are_now_trouble_with_law

Thank you for the "refresher" course on Bruce Carson. I am so looking forward to the trial. Its like we get this election campaign, with a new hit record--harpercon, and two trials. what more could political gunkies ask for?

hi e.a.f....I must say I found his performance bizarre, more worthy of the hunchback of Notre Dame than a Canadian Prime Minister. I still can't decide whether he is happy about something, or going off the deep end. Needless to say I'm hoping for the latter... ;)

hi anon...I must say I did consider putting Justin or Ray Novak's head between Harpo's fingers. But as for the one on the net I'm not sure I dare look... ;)

hi anon....yes, I am very fearful of what Harper might do if he sees his chances of winning the election slipping away. For he has no moral compass, he is desperate, and he is capable of anything. And not only is he capable of pulling some stunt before the election, if by chance he should eke out a minority, he is also capable of doing anything to stay in power....

hi David....thanks for the link. With the way the Cons are twisting reality and lying like thieves, it should come in handy...

hi RT....yes the dictator should does have appalling judgement and the reverse Midas touch. He seems to have some kind of attraction for shady characters. Of course I was disappointed to hear that Ol' Brucie will be appearing without the former escort. But the damage will still be great, and I shouldn't be greedy... ;)

hi David...thanks for that. I should make a collage out of their mug shots, and either publish them on this blog, or paste them on my fridge for easy reference...

Deficit King makes joke about deficits while mocking other's ability to manage the economy. Is it just me or do the opposition ads write themselves?

From the Stephen Harper Non-Answer Generator...

“But he’ll [Trudeau] run, he says, a modest deficit, a tiny deficit, so small you’ll hardly see the deficit! And only for three years, three deficits, three modest little deficits, instead of the eight consecutive deficits we’ve run!”

Harper has the most "false" statements of the 4 leaders:

hi anon....you're right, those ads should write themselves.Now all we need to o is see them, and as many as possible...

hi David...I know it is madness isn't it? You'd think the Cons would go out of the way to avoid mentioning the word DEFICIT. But I guess they're desperate, and they are capable of anything...