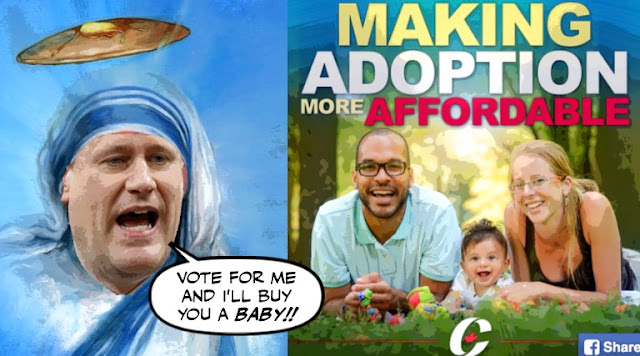 It's Stephen Harper's latest desperate plan to try to soften his image, and make himself more popular.

By buying more votes with OUR money.

But sadly for him there's something terribly wrong with that picture.

And it's just more Con fraud.

The photo used in the Tory ad was taken by photographer Jure Gasparič, who lives and works in Ljubljana, Slovenia. According to his Facebook page, Gasparič snapped the stock image when the family visited the Tivoli park in Ljubljana in August 2012.

The photo and the parents aren't Canadian. Unless Slovenia is another name for Saskatchewan.

And the baby isn't adopted.

Further, it looks like the adorable child used in the picture to promote the increased adoption tax credit is not actually, uh… adopted. Pictures on Naja’s Facebook page show the newborn child in hospital, with mom and dad, immediately after birth.

But it does tell you all you need to know about the state of the Con campaign... 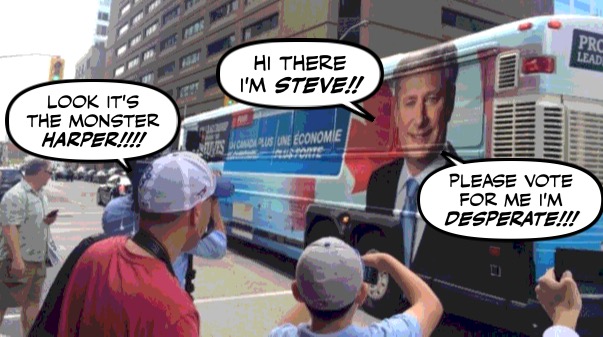 The wheels are coming off. All it can see in its rear view mirror is the Senate scandal.

It's depraved leader is now living in an Alice in Wonderland world.

A surreal Alice in Wonderland air is beginning to surround Sen. Mike Duffy’s bribery, breach of trust and fraud trial, and it is shredding the government’s credibility. In the looking-glass world of the Prime Minister and all his men, reality is what they say it is, and skeptics be damned.

Having betrayed the public trust and debased their brand, the Conservatives are inviting us to join the Mad Hatter’s tea party, swallowing whatever impossible thing they roll out of the pantry.

Jenni Byrne, the Harper groupie and campaign manager is getting more and more desperate...


Or since she's now willing to sacrifice the lives of thousands of Canadians, for crass political purposes.

Now that Stephen Harper is under pressure to fire his precious baby Novak.

Maybe he can arrange to have it adopted instead... 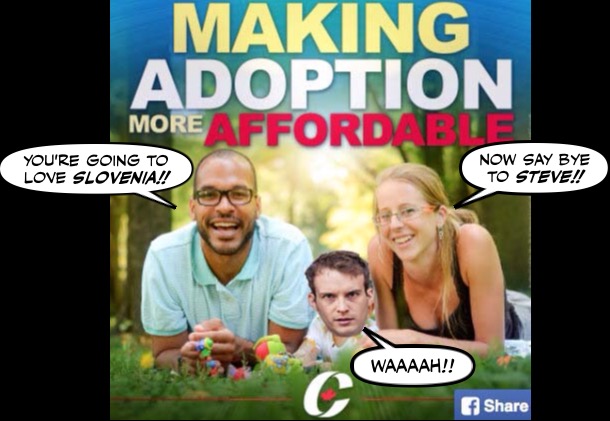 The Harper Con campaign, heading for a ditch or a brick wall near you.

It's all going horribly wrong. His credibility is shattered. The economy is tanking.

The monster has run out of ideas and out of lies. 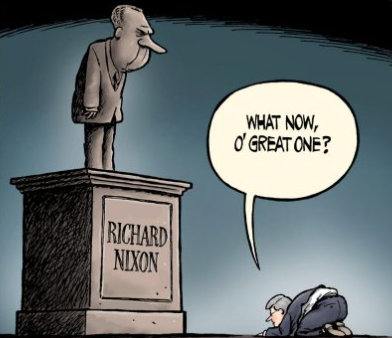 He's on his knees and crazy desperate.

We have him where we want him. 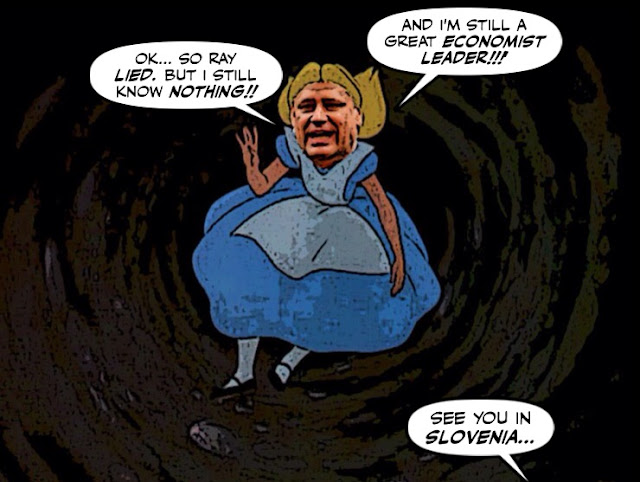 Millions of our money flung around every day to buy votes for Harper. And we don't even get a say about what it gets spent on. The fourteen million announced in Hay River to chip seal a part of a road was money included in the announcement of a year and a half ago that gave Parks Canada money for infrastructure so even that wasn't honest. Just a trick. Everybody should study the announcements and the give-aways really hard to see how many are really announcements of new money and how many are re-announcements masquerading as something new.

We know lots of nice people that got burned by Cons posing as an adoption agency in Kitchener-Waterloo. It was disgusting now and making it an election 'promise' makes it even more disgusting now.
There's something stinky behind this promise. I don't get it, but hopefully someone as wise and observant as you Simon will figure it out!

like who is adopting in Canada these days? Really, its a private adoption or an oversea's adoption. Many countries no longer permit their country's children to be "exported". Private adoptions are just that and are few and far between. How the Cons expect people to swallow that one is beyond belief. It impacts so few in this country, like what the hell.

There are many children waiting for adoption in Canada but adoption is a provincial item and how provinces regulate it will not be impacted by the new Con offer. Some provinces are so short funded they can't keep track of the children who are awaiting adoption or they don't finish the process of having parents relinquish the child or the relatives. Now if Steve said he was going to provide more funding for provinces which were having problems funding their programs and providing more social workers, now that might be news, but what Steve is "suggesting" is well as phony as that picture.