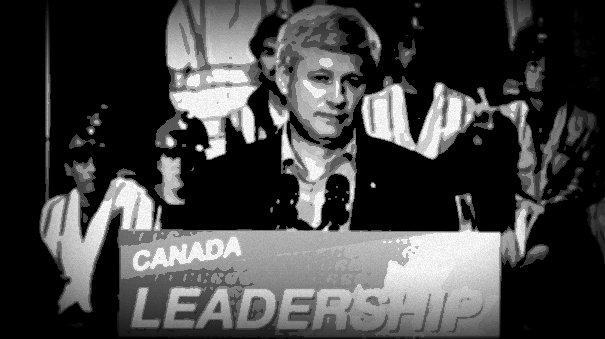 They are Stephen Harper's ghastly audience. The hand picked Con fanatics who are allowed to attend his rallies.

They hate it when reporters ask their Great Leader any questions, especially those about the sordid Duffy scandal.

And even though he only allows five questions a day, it drives them CRAAAAAZY.

So now they're trying to muzzle the media, or assault them in the foulest manner.

During a campaign stop in Toronto this morning, hecklers tried to shout down journalists posing questions to Harper about recent revelations at Duffy's criminal trial. After the event, one man expressed his frustrations to a group of reporters, calling one journalist a "lying piece of shit."

Can you believe that crazy fanatic? 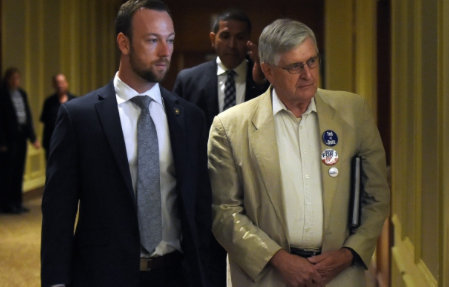 Who does he think he is? Is that a political rally in Canada or a beer garden in Nazi Germany?

And why were Harper's security goons so slow to intervene? Does CSIS know his name and is he dangerous or just senile?

Duffy didn't pay his TAXES? What the hell is he talking about?

But of course the Cons are only to happy to have their supporters try to intimidate the media, like they do all the time.

No matter what that Con clown Kory Teneycke says.

And this on the day when Harper was trying to resuscitate his fascist war on crime... 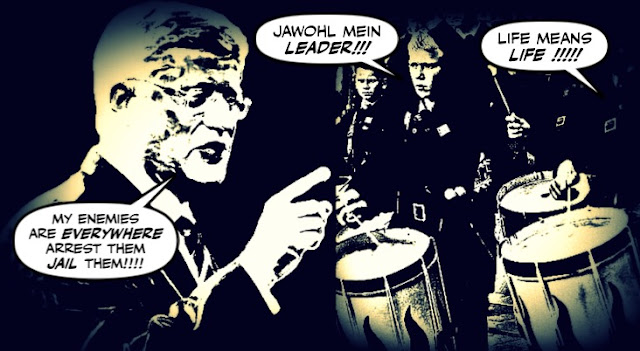 During the campaign stop, Harper announced that his government's first "justice priority" will be to pass the Life Means Life bill, which would give judges the imperative to sentence some offenders found guilty of first-degree murder to life in prison without parole.

And all I can say is if those Con crazies think they can intimidate us they've got another thought coming. For we will not be silenced.

And we will REMEMBER.

And when those dangerous fascists and their depraved leader are finally defeated they will end up in court and made to pay for their crimes against Canada. 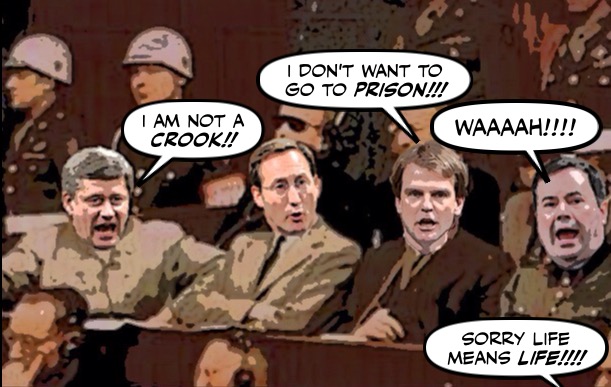 Stand up for our democracy.

I loved the fact that this guy was wearing a Rob Ford button. It is hilarious that Harper allows only 5 questions. If the media makes sure all 5 are about the scandal I wonder if he will reconsider this rule?

The press gallery must have had a great party after the reformatory/dementia attack. I'll bet Hanna didn't have to buy a drink all night.

I guess the heckler was vetted and approved and given an invitation to attend the campaign stop. Don't know what he was talking about, saying Duffy didn't pay or made a mistake on his taxes. Just shows that this guy is clueless. So this is the kind of guy that is allowed in to Harpers campaign stop. I wonder if he was wearing the Rob Ford button when they vetted him.

I think it's a Doug Ford button.

What a joke. This idiot is the perfect example of Harper's base, deranged, clueless and a bully.
JD

hi Kirby...yes it was hilarious, in an insane sort of way. The guy was going on about Duffy's TAXES? But of course Harper is stoking that kind of reaction by repeating the same lines as if they were the Gospel truth. So those ignorant rednecks can't understand why the media keep asking questions. The problem for us is that a lot of other more rational Canadians don't understand the ins and outs of the court case, so when the trial recesses this week for TWO months, the impact could be diminished.And the future of our country still hangs in the balance...

hi anon...is easy to see how he could be a Ford supporter. There is nothing worse than an idiot who is belligerent. I must admit that when I am confronted with them in real life, it takes all my amazing powers of self control to stop me from slapping them silly...or sillier...

hi rumleyfips...Hannah and her friend have every reason to celebrate. I thought they handled themselves really well. Challenging his slanderous comments, but never losing their cool. Which is more than I would have been able to do. First I try to stay cool, then I mock them, then I turn red, and then I explode... ;)

hi Pamela...yes, as Rick Mercer tweeted: Are they vetting people for rabies? The interesting part is that the first person he went after was a Con supporter, who said he had supported the Conservatives for fifty years, but wanted the TRUTH. Needless to say he was rushed away by security quicker than the other guy. But I was encouraged all the same...

hi JD...yes he is a perfect example of Harper's idiot base. And although I had a good laugh, its people like that who could lead us into a fascist state. You know where ignorance is STRENGTH. We're in a living nightmare and the future of our country hangs in the balance....

Take a look at any day of the front web page of the National Post. Its a Harper apology spin sheet. Ridiculous.

Then you get laughed at Simon and hopefully someone videos the tantrum.

attacking the reporter was just plain stupid. of course that says it all about some of the Con base.
The reporter did the right thing, remained calm. Accusing her of lying on her income tax, priceless.