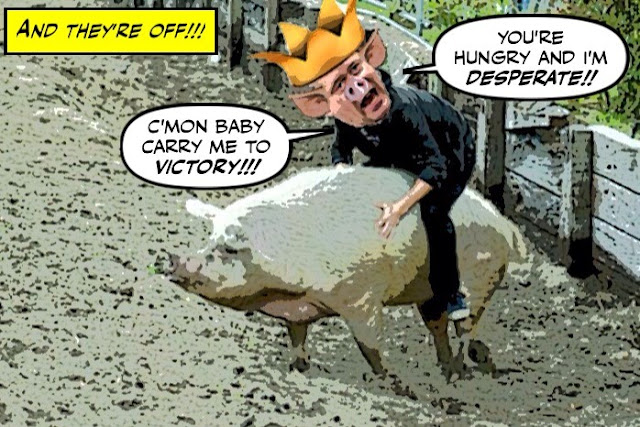 It seems only fitting that Stephen Harper should kick off his last election campaign, in the same way he has governed this country.

By seeking to extract maximum political advantage from the withered carcass of our democracy.

By making it only too clear that the H in Harper stands for hypocrisy. Or hog.

Responding to questions from reporters, Mr. Harper defended his decision to call for a campaign of such audacious length, which advantages the better-financed Conservatives, on the grounds that the election campaign was already effectively under way, and all parties should be bound by the same rules.

“If we’re going to run our campaigns...those campaigns need to be conducted under the rules of the law, that the money come from the parties themselves, not from government resources.”

When in fact nobody has spent more government resources promoting themselves than the Cons. Culminating or climaxing three days ago with this outrageous pork-a-palooza. 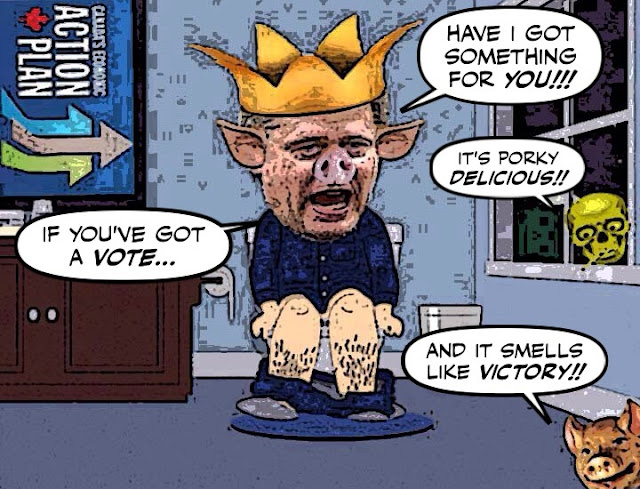 Nobody has less respect for our laws than the grubby porker king Stephen Harper.

It is as the Star editorialists write, yet another reason to get rid of him and his sleazy government.

This shameless move is yet more evidence – if any was needed – that the Harper Conservatives are long past their sell-by date.

Canadians now have 11 long weeks to listen to the party leaders and make up their minds on who best deserves their support. But one thing is already clear: it’s time for a change in Ottawa, and high time to send the Conservatives packing.

And it also is, as Don Martin points out, just more proof that the Cons are desperate.

Confronted by that hostile messaging mess, the short-panted minions in Conservative party headquarters have devised a uniquely bizarre campaign strategy.

Because if anyone  thinks that most Canadians want more Harper, or that Great Ugly Leader is not desperate or crazy.

They should check out this photo of him taken shortly after dropping the writ... 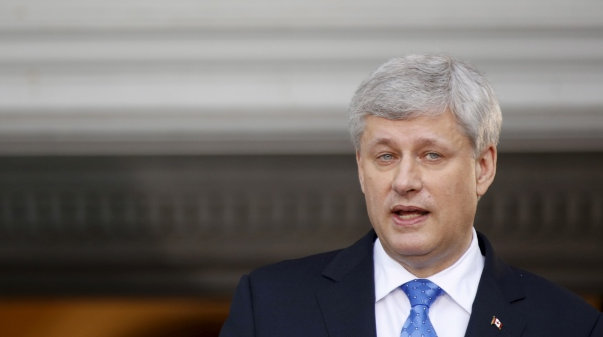 And then ask themselves, does that look like a man confidently heading for victory?

Or a man who thinks he can buy himself more time? 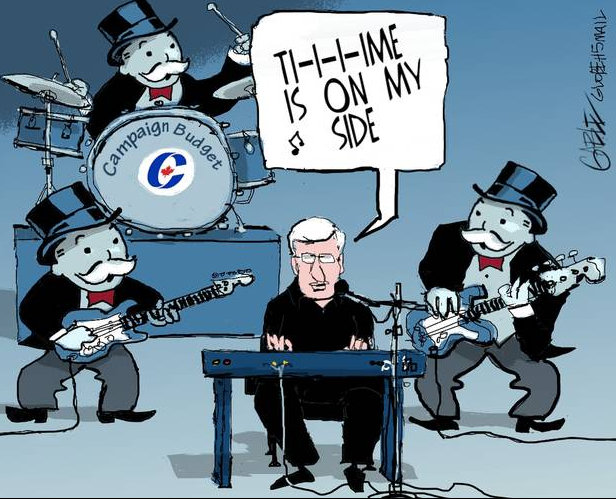 Or a man on the verge of a mental breakdown who knows that his time is almost over?

And has a sinking feeling he's about to be humiliated... 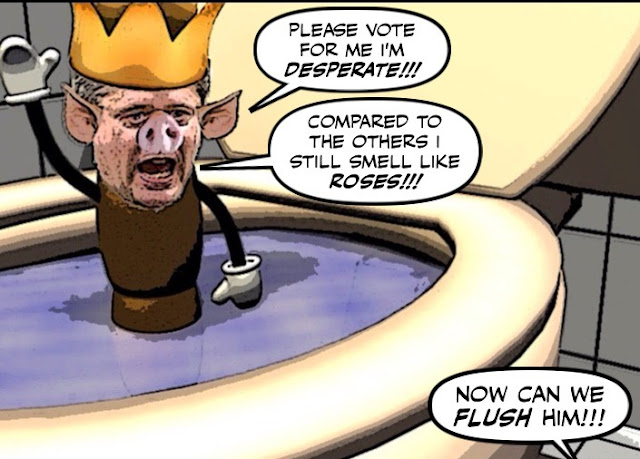 And of course after ten years of filling the internet with images like that one, to ensure that his foul legacy survives him, you know how I feel eh?

He is the depraved and cowardly leader of the worst government in Canadian history. He is now making a last desperate attempt to buy and steal another election. Even if that means wallowing in his own excrement.

But it will not work. His time is indeed over. We are indeed going to break him, and humiliate him beyond recognition.

And in only 75 days we are going to bury him and his Cons FOREVER... All the toliet imagery got me to a good place. Send two doctors for Harper! The Canadian voters are about to give Harper a cleansing.

I suppose you aren't surprised that Harper DID NOT ATTEND the funeral of Flora MacDonald (after misspelling her surname). I think that was absolutely disgusting on his part, but are we really surprised? I found the grave of the original Flora, on the Isle of Skye. Have you ever been there? http://www.findagrave.com/cgi-bin/fg.cgi?page=gr&GRid=13692365 She was in Nova Scotia for a while too!

Harper kicked off his campaign in Montréal, among a tiny minority of Con supporters on our Toryless redoubt. There were demonstrators; but it is very hard to organise a protest in the heart of the summer holidays. I couldn't go myself as I was working on a festival.

I've never seen Harper looking so physically unhealthy. However, we must be careful not to underestimate this wily and utterly ruthless enemy.

Hi Steve...yeah I'm up in the north of Scotland and I don't have access to my full library of Harper pics so I decided to use those two toilet pics, even if they gross some people out. I'm sick of the way so many Canadians are always beating around the bush and failing to call a turd a turd. As far as I'm concerned they belong in the toilet bowl with him. When I compare the nation I'm in with its thousand year history of resistance,to Harperland with its legions of stroke re an collaborators it makes me sick to my stomach. But yeah if somebody wants to gives the dictator and his stooges an enema , I'm all for it. But I'm warning them they will need a fire hose...

If its as cold as it as where the women were playing golf, you must feel right at home.

I'm glad to see this post: I was afraid we had lost you for half the campaign. Now if Teddy restarts with his polling analysis I'll be happy. Somebody downgraded 308 just in time for Harper.

Don't you his invitation only campaign Simon?

After hearing the lunatic spew out the bullshit re: his record and THEN speak of accountability I then realized he is mentally ill. Anyone who believes his BS are as well.
Stephen Harper, he's just not sane.
JD

Saw Stevie on the news kicking off the great Con campaign. He looks positively ill, even Duffy's make up artist couldn't cover up the pallor. Reports are that Anonymous is going to release documents showing the real reason Baird resigned. In a later tweet they stated that they have no interest in his sexual preferences but that it is related to illegal activity. All I could find on the internet was some vague references to a suspected scandal but the story died or was buried because of a lack of evidence. Time will tell but unlike the US they seem to have an ability to even scrub rumors from the internet.
RT