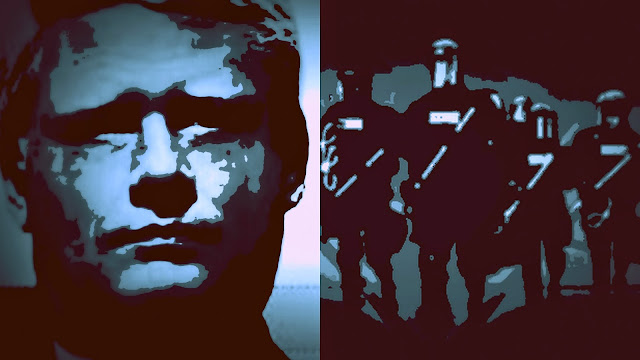 Sometime today Canada's Information Commissioner is expected to recommend that charges be laid against the RCMP, for withholding and destroying gun registry documents, before Parliament had finished debating whether they should be shredded.

But if she does it will now be a meaningless gesture. For it too will be shredded.

Because it seems that buried deeply in the Harper regime's latest foul omnibus bill, is a bill to protect the RCMP by rewriting history.

The Harper government moved to retroactively rewrite Canada’s access to information law in order to prevent possible criminal charges against the RCMP, The Canadian Press has learned.

The unprecedented, retroactive changes — access to information experts liken them to erasing the national memory — are even more odd because they are backdated to the day the Conservatives introduced legislation to kill the gun registry, not to when the bill received royal assent.

One that Big Brother would approve of, or rightly claim as his own... 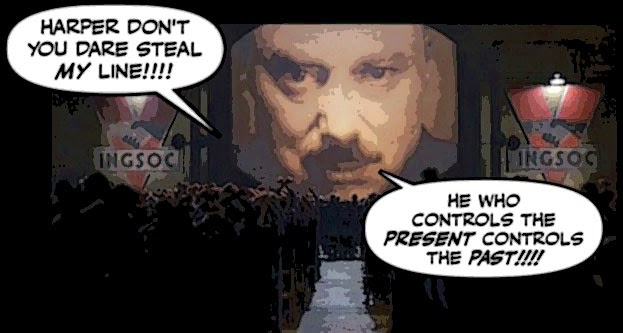 “I find this provision almost Orwellian,” said Fred Vallance-Jones, an associate professor at the University of King’s College in Halifax and an expert in access to information law. “It seeks to rewrite history, to say that lawful access to records that existed before didn’t actually exist after all, and that if you exercised your quasi-constitutional right of access to those records, well too bad, you’re out of luck.”

One that our own depraved Big Brother would use against us... 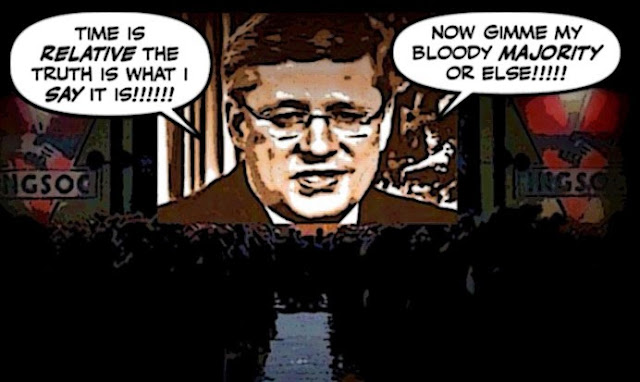 And one that raises an even more disturbing question: If the Cons are bending backwards to protect the RCMP, is the national police force returning the favour?

By not only synchronizing their anti-terrorist messages with the PMO's propaganda, lock, stock, and bullshit. Just like Harper's Army does.

But also by deciding NOT to lay charges against Nigel Wright in the Duffy affair... 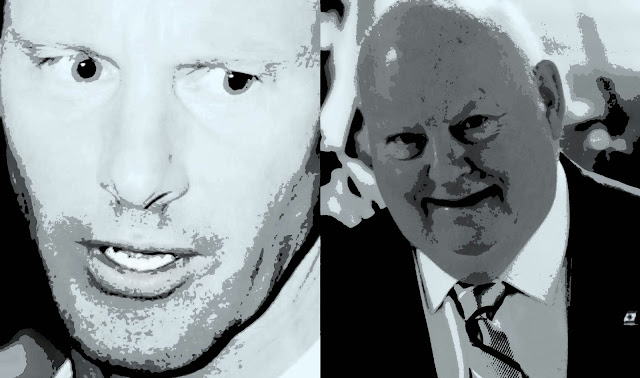 Even though e-mails collected by RCMP agents clearly show that his PMO was at the heart of a conspiracy to fiddle with an audit,

At the rotten core of a grubby plot to whitewash the possibly fraudulent record of a Con Senator, and star fundraiser.

For the sole purpose of protecting the reputation of the man who appointed him, and with whom he had such a passionate affair.

Because the RCMP knew that if they charged Wright, the trail would eventually lead to  Harper... 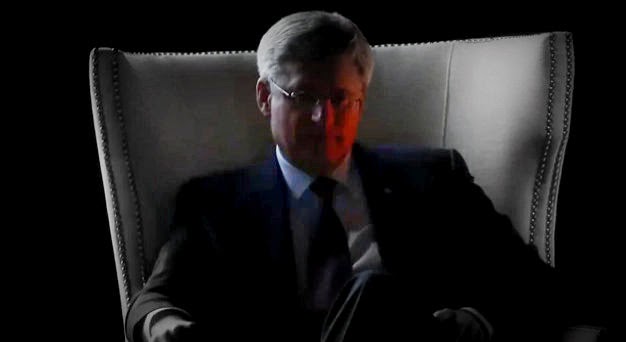 The shadowy morally corrupt control freak almost certainly at the very heart of the scandal and the cover-up.

And crossing him, or charging him, the RCMP either did not dare, or more ominously did not want to do. In the democratically corrupt spirit of you scratch my back, and I'll scratch yours.

Now put it all together. They're rewriting history. They're giving themselves new powers to go after their enemies. The police may be already working for them, as is the army.

Isn't it obvious where this maniac is taking us? 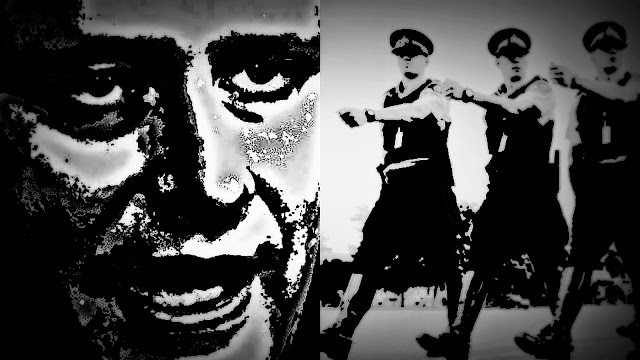 I don't know how many Canadians recognize the danger. Too many still seem to think that it couldn't happen here.

But we must make it clear to them that if they don't unite, put country before party, and create a giant Stop Harper movement of national salvation.

We really could end up living in a very dark place, in a Canada we don't recognize...

And for all you dumbass libertarians out there that voted for Stephen Harper because you didn't want the government OPENLY tracking your gun license (like a driver's license, mortgage, cell phone or nearly every other form of communication), you've now got Canada's Gestapo tracking you PRIVATELY. Well done, morons.

Chrétien and Rock handed him a wedge. It took a while but those chickens came home to roost now didn't they?

When are you leftists ever going to take the time, and listen? Why do I have to keep refuting the leftist short-hand, "If Harper gets in, we'll be just like 'Murica, and 'Murica is bad!" America isn't bad. America is our friend. America has problems, YES, absolutely. How many black Prime Ministers have we had? We're not so much better than them that we get to sit on a moral high horse,

But you never listen. You didn't listen then, you opted for political expediency. In any rightly-ordered universe, you'd regret that mistake and be asking forgiveness.

Pride again... Alas. Get ready, you're going to see more of this. Or I dunno... move to Scotland?

I seem to recall there is one way the opposition parties can kill anymore harper garbage bills from passing-- They just refuse to come back ( when the bells ring to call members for votes on bills) to vote, period, until it's at the point that an election HAS to be called -- if this is possible why don't they do it --- this insane tea party inspired government has gone on long enough..

"Too many still seem to think that it couldn't happen here".

For quite some time I've been comparing Harper's regime to The Party of Orwell's 1984. I've been expressing things that seem like mad conspiracy theories or insane panic, met with "oh they won't do that" or "that'll never happen" apologists for the Cons. And everything comes to pass; I sometimes feel like Cassandra, trying to convince people that horrors await only to be dismissed and then see these things pass.

But do people learn? No, every time the Canadian people assume that the worst won't happen. At what point do people say "enough!"? At what point do we realise that Orwell's IngSoc has been Harper's instruction manual?
"The German Nazis and the Russian Communists came very close to us in their methods, but they never had the courage to recognize their own motives. They pretended, perhaps they even believed, that they had seized power unwillingly and for a limited time, and that just round the corner there lay a paradise where human beings would be free and equal. We are not like that. We know that no one ever seizes power with the intention of relinquishing it. Power is not a means, it is an end. One does not establish a dictatorship in order to safeguard a revolution; one makes the revolution in order to establish the dictatorship. The object of persecution is persecution. The object of torture is torture. The object of power is power."

Perhaps this "little favour" is in exchange to ensure the rank and file of the RCMP don't get to unionize and that lawsuit made up of 300 former and current members of the RCMP doesn't make it through the court system any time soon.

Erasing history is another way of erasing ourselves. Wait until herr harper starts "erasing" other historical documents.

Speaking of disasters, C.B.C. is reporting, the CEO OF CP Rail is training office workers to run the rail roads during an impending strike by the Teamsters who are the engineers and all those nice and easy jobs in the rail yards. Can't you just see it now, the accountant being an engineer, going through a turn too quickly into a major city and it goes off the rails, and bursts in to flames. Its like a re run but hey, that CEO at CP Rail needs his multi million $ bonuses and Canadian lives be dammed. haven't heard word one from any cabinet minister regarding rail safety or the safety of Canadian lives. Guess they'll wait until a town burns down and 50 or so people are dead. Then Steve and his cons can have a nice photo op and go to all the funerals. Should work well in an election year.

if the federal government doesn't do anything it is to be hoped Premiers and Mayors get their act together. They saw what happened in Quebec.

Just when I thought Steve had hit the highest level on the sleaze meter he goes and sets the bar even higher. What other purpose would this absurdity serve other than a dirty deeds exchange. I can't wait to hear his explanation for this.
Look out Stevie, Tom's coming to get you, 3 way tie according to Ekos!
JD

A few examples of past events that have the cons fingerprints all over them.

a) OTTAWA–Former RCMP commissioner Giuliano Zaccardelli's decision to name then-Liberal finance minister Ralph Goodale in a criminal investigation likely influenced the 2006 federal election, the chair of the RCMP public complaints commission says
b) In December 2012, Edgar Schmidt sued the federal government for failing to of Rights and Freedoms. According to Schmidt, the Department of Justice “had its lawyers apply only a flawed and minimal screening test. It does not identify and report on legislation take adequate steps to verify whether proposed bills violate the Canadian Bill of Rights and the Canadian Charter the department itself considers almost certainly to be illegal and unconstitutional.” After the court case was launched, Schmidt was suspended without pay for “violating his duties as a lawyer and public servant.”
Canadian law requires that the Deputy Minister of Justice examine draft legislation for compliance with the Canadian Bill of Rights and the Canadian Charter of Rights and Freedoms (“human rights laws”). If the proposed legislation could potentially violate the Charter, the Justice Minister is obligated to notify Parliament.

Listen to journalist Jennifer Ditchburn's (recent winner of the Charles Lynch Award) comments about the budget implementation act/ access to information requests, and the "Men in Black" movies with the "neuralizer":

Yo Anon 10.27 PM this con government is illegal by all accounts and me I can't wait until they are behind bars in a jail cell the whole lot of them. We are working on it. The top brass of the RCMP and Armed Forces could be facing time behind bars as well. Too bad so sad love dad.

You can all go to the hell of your own making you cannot under international law wage war when no war was ever declared. Never heard of that? Then you are all fools that deserving a harsh prison sentence...

Anon 8:05 AM you people are too much. I and many are truly centrists. So the left calls us right and the right calls us left. Because they only see us from their high chairs fearfully looking to the other-side and we are caught in the middle. We stand up for labor unions fair and open government woman's rights gay rights fairness and fair wages and safety in the work place and mostly real freedom not phoney security et al...

Go back to your cave and leave us alone. Don't forget to take your club with you eh.

I was reading an article in the mike Duffy trial where one of the emails was not read which they obviously are usi g to defend anyone in harpers realm from being implicated thus leading to harper--emails can be read and then changed to unread --so noting an email in court as being unread is suspicious--the government has trained hackers on the payroll. The fact wright is not charged is suspicious