Laureen Harper and the Batty Leader of Parliament Hill 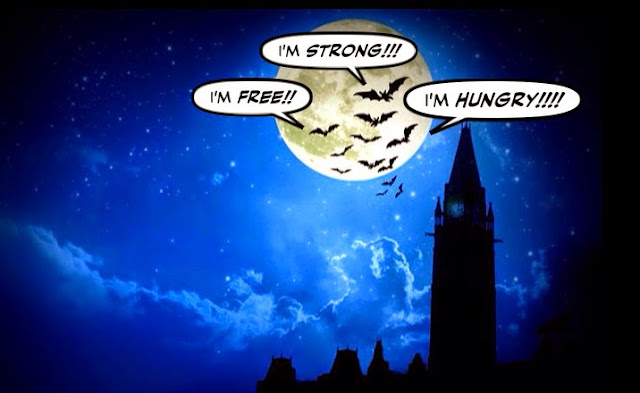 When I saw all those bats flapping around over Parliament Hill the other night, I wondered  where they were coming from.

And because of the ghastly things they were squeaking, and the foul smell of their droppings, I naturally assumed they must be coming from the Harper PMO.

But now the horrifying truth has been revealed.

Move over, Charlie the chinchilla and Stanley the cat — some new little furry faces will be taking up temporary lodgings at 24 Sussex over the next few months.

Prime ministerial spouse and notorious animal lover Laureen Harper announced Friday on Facebook that she has recently installed a bat house on the grounds of the official residence.

And while I suppose that's a good thing, because bats are amazing creatures and they do need to be protected. And I've always supported the idea of turning the Senate into a bat house, after it's abolished.

I have to admit I just don't know how Mrs Harper finds the time to take care of them properly.

Now that she spends so much time flapping around the country herself, campaigning for her desperate husband.

Former Tory MP and Liberal candidate Bill Casey says Laureen Harper’s visit to the riding Wednesday is all about politics.

Raising money like Mike Duffy did, to try to destroy his enemies. While playing the role of the First Lady of Canada.

“It appears that the Harpers have adopted some aspects the American model for electioneering. In the United States it is not uncommon for the spouse of the President of the United States to campaign and fund raise during an election period,” Casey said.

Which couldn't be more scandalous or less Canadian.

But what really worries me is whether our "First Lady" and no doubt the next senator from Nova Scotia, knows what she's doing eh? 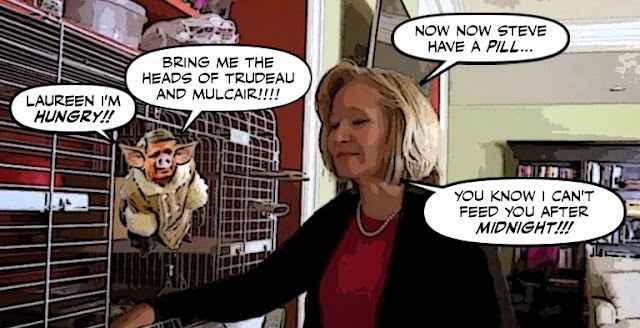 Because if you don't.

The results can be DISASTROUS...

But then as we all know, somebody made that mistake years ago.

And they owe us all an apology.... 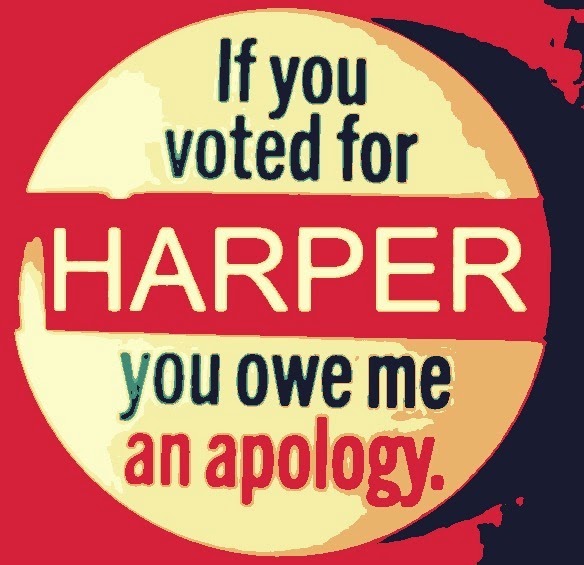 Because the results couldn't have been more horrifying... 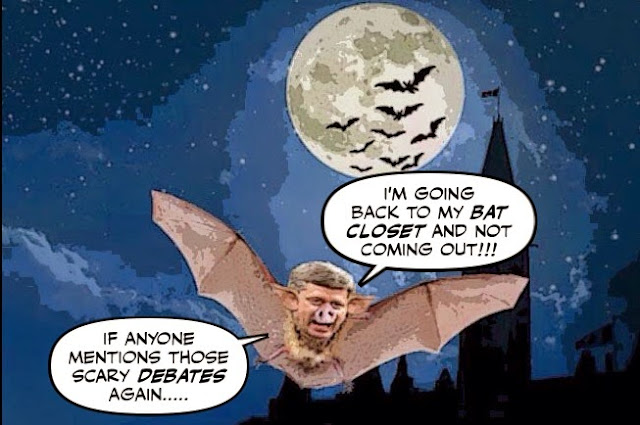 And the only question is when can we get rid of that batty leader AND his First Lady?

And take back our Canada...

I think you have just insulted bats. I love them they are cool. I remember watching a National Geographic special on bats. Bats are highly intelligent and can navigate in the dark with the equivalent of sonar or radar. They send out signals and wait for the bounce back signal to tell them something is in-front of their flight path. They the National Geographic strung fishing line as thin as a human hair in a web in a dark room to see if the bats could navigate their way to the other side where their food was waiting. They did I have had some of the furry critters in my hands if you can get over their looks you come to see how beautiful they really are.

Laureen and Steve on the other hand are more like vampires see here;

They sucked that five million out of Canada while doing nothing in return but gutting her.

Don't know if Laureen should be held up as anything other than a victim of choices she made when she was younger...kinda petty to attack spouses, look at what poor Michelle Obama has been forced to contend with..of course, Michelle would have made a much better President than Barrack, IMO, ...Laureen? Not so much...

well if she is out raising money for the Cons, lets hope she isn't doing it on the Canadian taxpayer's dime.

Is she taking the RCMP officer with her for "protection"? That's my tax dollars she is using to raise money.

If they don't have their other "stars" raising money they have to find someone and who better than the wife? Steve can stay home and hide in his closet and not have to answer embarrassing questions, because I'm sure even amongst the "faithful" there are questions, especially about those 6 jets in the middle east, killing people at $90K per bomb, while the medical clinics in the North do without basics.

Bats in their belfry?

Look Miz Laureen made her choices made her own bed and now has to lie in it. Lie lie and lie again to protect the monster man Steve Joe Harper. Sorry if you are offended but I call it as I see it. In my 60 years I have never seen anything like the Harper dunces except in movies. And they were comedies this is not this is real life. Laureen would rather protect stray cats than help First Nations women in their plight. Put that in your peace pipe and ask why? The five million the Harper's stole from the rest of us. Laureen gets to live a cushy life of the rich and famous. Do you really think she cares about Canadians? No she cares about her new-found wealth.

If you have never been to Turner Valley Alberta Canada you will not understand. The biggest business there was the 'cop shop' the RCMP. They ran everything almost. It used to be an oil hamlet. It ain't very pretty Priddis to the North and Millarville Alberta to the South are way nicer. Turner Valley was considered "The Ghetto" so now you know. In my humble opinion Laureen is what is known by my generation as a gold digger.

Okay so it has defiantly gotten nicer because the good parcels of land have been hoarded by the nouveau riche. But Laureen was not pretty property and saw Steve as a way to prosperity. I don't feel sorry for her she helps closet Steve...

I'm waiting for these 2 to show up at 24/Seven Sussex:

Maybe Steve and Laureen can have a photo-op with them in an upcoming 24/Seven propaganda video, such as the latest installment:

hi Mogs... well I love all animals, so I also love bats. Except for the vampire ones I once saw at a zoo in Brazil, crawling on all fours to go and feed on some cows. And of course the Con ones are even more horrifying... ;)

hi mizdarlin....I normally stay away from criticizing Harper's family. But now that Laureen has become a full time political campaigner she's a fair target. And don't dismiss her influence that lightly. She was the one who got him into that wacko church he belongs to, and is a right-wing ideologue as bad as he is...

hi e.a.f...No, the PMO came out the other day and claimed the party is paying all her expenses. But she is being used to soften his image, and I don't approve of PM spouses doing political work as they do in the U.S.. It's just another way Harper is mutilating our traditions...

hi anon...you know I almost used a graphic I made of Harper as Batman and Ray Novak in the getaway Batmobile. But I figured I'd had enough fun, and didn't want to overdo it... ;)