The Year Ahead and the Coalition Dream 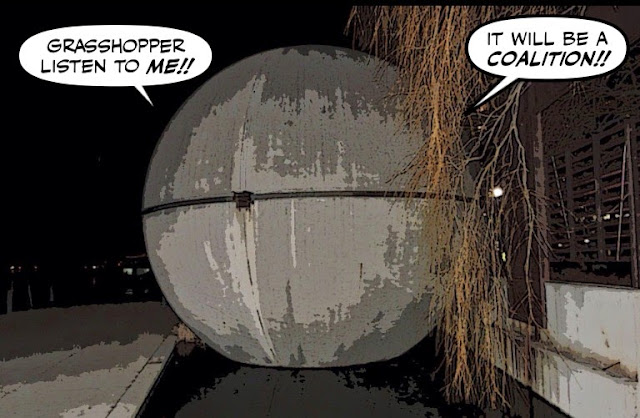 It's a little too soon to take out my crystal ball and predict what's going to happen next year, like so many in the MSM are already doing.

Even though the big hollow ball in my neighbourhood seemed to think it knows, as I passed it on my way home last night.

But then homeless men like to smoke crack inside it, so it might have been them, and its predictions are probably as reliable as all those others.

Although I wouldn't be surprised if we do end up with a Liberal coalition government. Especially since even after all that has happened this year, nothing has really changed

In fact, a look at months of results from six different pollsters suggests Trudeau's Liberals remain imperviously buoyant, Harper's Tories have seen only marginal gains despite a number of issues breaking their way, and NDP fortunes are stalled, notwithstanding Mulcair's widely lauded parliamentary performance.

Stephen Harper has narrowed the gap, but Justin Trudeau is still on top. And although that could change, I don't see it changing enough to give either leader anything more than a minority government.

And neither do such political opposites as the former journalist and pollster Paul Adams, and Tom Flanagan, Harper's former adviser.

"It's a reminder that a minority (government) is the likeliest case out of the next election, rather than a majority," said Adams. Flanagan said it's possible to see a path to a Liberal or Conservative majority, but a minority appears more likely. 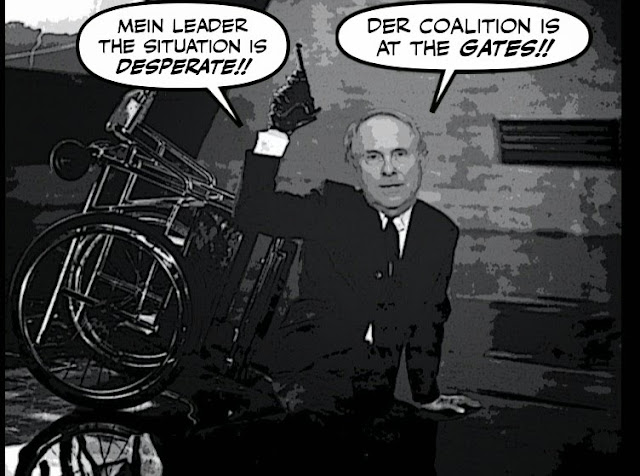 But unlike him, I would welcome a coalition, as would most Canadians according to this recent poll... 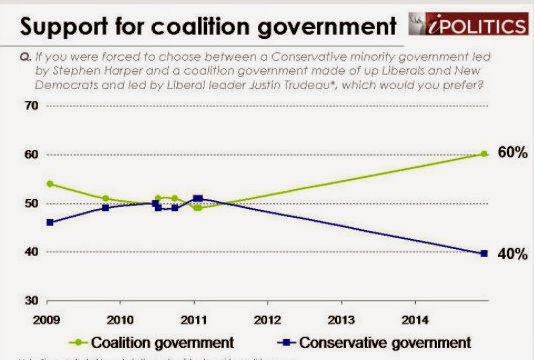 Not just because it might be the only way to deny Stephen Harper another mandate.

But also because I think Trudeau and Mulcair might make a very good combination. 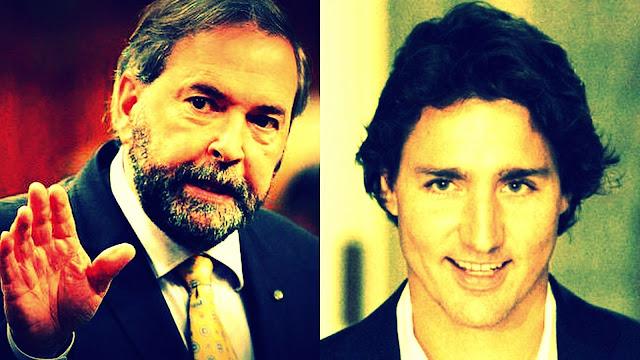 Mulcair would give Trudeau some added gravitas, and Trudeau would give him some added flair. I like it when the young or the younger work with the old or the older.

And also because a coalition government would have even greater strength and legitimacy to tackle the daunting national challenge it faces.

To heal the damage the Harper cult has done, restore our Canadian values, and repair our tarnished Maple Leaf.

Remember when everyone seemed to love Canada? Travellers who displayed a maple leaf emblem on their shirts or backpacks could count on a friendly welcome in most countries in the world. Now, not so much. We are perceived as ugly Canadians for reasons that include environmental foot dragging at home and complicity in death and destruction overseas.

Because there is so much we need to do:

Canada could stop shilling for the fossil fuel industry and get serious about climate change. Canada could withdraw from our overly compliant response to American military initiatives and return to its principled peace keeping identity. Canada could begin to police Canadian firms doing business overseas more rigorously. Maybe then the Maple Leaf would be seen once more as badge of honour, not a pirate flag.

And I want to feel proud of my country again. That's all I ask for, that's all I want.

You know, sometimes I wish I had the awesome powers this Nigerian pastor claims to have...

So I could just wave my arms in the air, or jump up and down.

And the Cons would lie down before me... 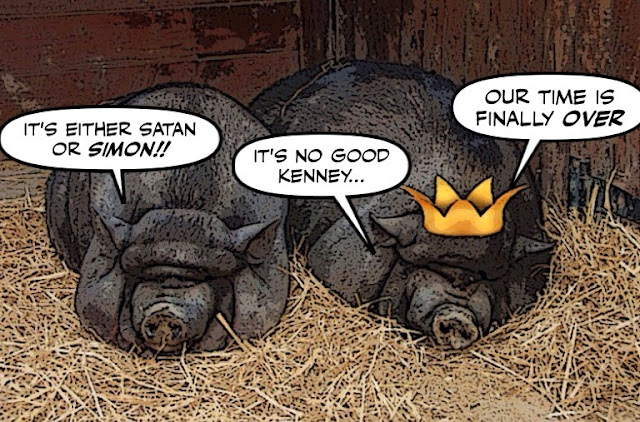 So I could arrange to have them shipped off to the sausage factory.

But then the pastor is as fraudulent as the Cons.

And I'm quite happy to settle for reality, and that includes a coalition.

And as I stand there waiting for 2015 after such a brutal year... 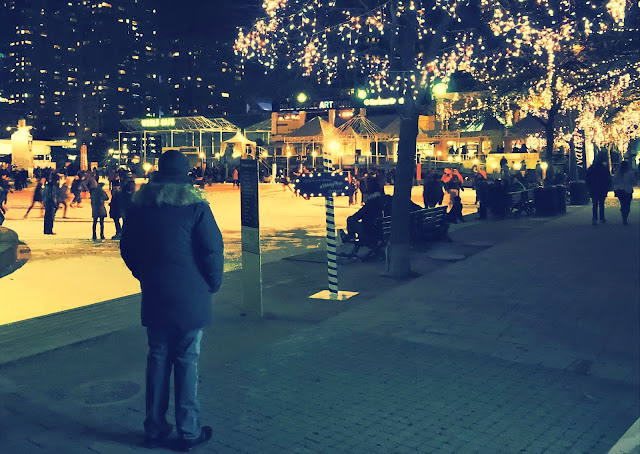 I can't imagine a better dream than one where we all work together in the New Year.

To defeat the bestial Con cult and its depraved leader.

And make our Canada beautiful again...

Simon.......I am with you on this one......all I want is to feel proud of CANADA again and be able to hold my head high.........be able to fully support Parliament and all that it stands for.

However, I can not make people become less GREEDY!

If Trudeau wins a minory there will be no coalition, Trudeau has made that clear, he said the the NDP is too interventionalist (which means not rightwing enough).

Mulcair is open to a coalition, but it takes two to tango, which means that only way it will happen if its an NDP minority, because Trudeau will get booted as leader.

I still prefer an NDP Majority Government to a coalition, we don't need good NDP policies watered down by Liberal neoliberalism and incompetence.

Still an NDP lead Minority is better then nothing.

And believe me the NDP is still in this, Mulcair is a cunning long term thinker and polls are glimpses of yesterday. There are enough people willing to concider the NDP for majority government.

Perhaps Danielle Smith has shown us the way.
Just long enough to undue the harpercon perfidy and send their pathetic remnants into permanent obscurity.

The only cons left will be in Alberta where they should be and there they can stay.

After all the damage has been repaired and Canada's reputation restored and we have gone back to enjoying life in our country then the New Liberal Democratic Party can dissemble back into their previous identities but working together to keep the cons away and making Canada once again a beacon of democracy to and for the people of the world.

If Justy agrees to a coalition, you can expect that half the Liberal vote going into the next election will stay home rather than unite with the Dipper Commies. In fact, the Blue Grits might even vote Conservative to defeat the unholy matrimony faux-merger thus giving the HarperCons another majority gov't.

A pre-election or even a post-election coalition attempt will most certainly fail, and even whiff of coalition sneakiness will also assure a HarperCon majority gov't.

A Lib-Dip coalition is the bacio dela morte in Canadian politics ... believe it.

What I hear is, anyone but Harper. If Trudeau and Mulcair don't form a coalition to defeat Harper? They had better start thinking of how to dodge furious Canadians and plan on leaving this country.

All the vile evil things Harper has done to this country such as, selling Canada to Communist China with his FIPPA deal? Harper is a traitor doing acts of treason and I have no idea why, Harper isn't in prison?

BC survived a Liberal/Conservative coalition in the 1940's.

I think the majority of political scientists that are familiar with the Parliamentary system say a coalition government is the most democratic of all, as various parties have to compromise, and pass legislation that the majority of the people in the country actually approve of. I remember Bruce Hicks saying words to that effect on CTV a few years back.

hi Kathleen....I'm glad to hear that., and don't worry about the greedy. Greed is its own punishment...

hi Gyor....I am far to the left of the NDP, I have voted for them in almost every election. So I would be happy if Tom Mulcair did become Prime Miinister. But I don't dream in colour as we say in Quebec. I'm relentlessly practical. And the fact is whatever progressive leader wins a minority will be forced to form a coalition with the other whatever they say now. For Canadians will demand it, and any resistance will be treated as treason...

hi ron...yes it is interesting how easily the Cons seem to be able to unite, and that's why they are so successful. While we fight each other and wonder why we lose. It's an insane situation and we desrve better...

hi anon...well that is the traditional view, but as that EKOS poll demonstrated most Canadians are prepared to try something different. Time goes on, things change, and change is both healthy and necessary. There will be a coalition if necessary, and it will be the kiss of death for Stephen Harper...

hi anon... I couldn't agree with you more. If either Trudeau or Mulcair resist the idea of a coalition, they will be a huge political price to pay, and the party that resists it the most will be the party that disappears....

hi Hugh...of course it did, as habve so many countries all over the world. A Con Libeal coalition has been governing Britain for years, and there is absolutely no reason it can't work in Canada...

hi David...not only is it an extremely democratic option it is a truly Canadian one. For this country was built by compromise not conflict, and the more we compromise the more Canadian we will be...