Stephen Harper and the Sickening Corruption of Chris Alexander 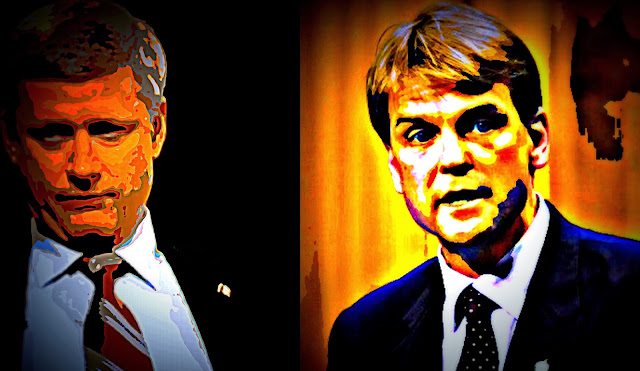 They say that everything he touches he corrupts, or drags into his monstrous world.

And it must be true eh?

Because just look at the sad and pathetic case of Chris Alexander.

Once he had half a reputation, then it started to unravel, now he's just another callous Con.

The last thread snapped a week ago when Alexander lambasted Ontario for its “scandalous” decision to provide medical care to “bogus” asylum seekers. “It’s irresponsible,” he railed. “It’s also unfair to for taxpayers.”

His tirade set a new low in intergovernmental relations. It signalled that any Canadian office-holder who showed compassion, tried to mitigate the harm Ottawa is doing or defended the values jettisoned by Stephen Harper’s regime was open to attack.

First he went after Ontario's Health Minister like a schoolyard bully for doing the right and decent thing. 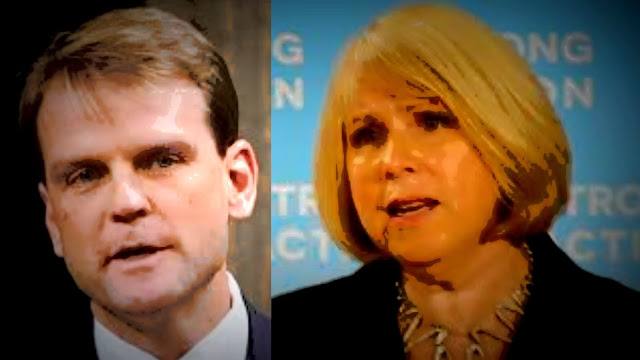 Then he went after the doctors like some kind of thug.

“We won’t have our policy made by doctors,” he declared. “We have to deter those who take advantage of our system — and there are a lot of them out there.” Speaking directly to listeners, he asked: “Do you really want your tax dollars to be spent on bogus, rejected refugee claimants?”

When they are just doing their sacred duty as doctors, and the way the Cons are treating refugees is absolutely sickening.

The concerns expressed by health care professionals at the time of the cuts have all come true. People were denied care, chronic illnesses went untreated, doctors spent an enormous amount of time trying to find patchwork solutions, and Canada received international condemnation for such a callous approach to refugees.

How could a country with such a proud history of helping the destitute of the world do this? How could a country as rich as Canada, which spent over $200 billion on health care last year, deny basic health services to such vulnerable and unfortunate people?

When Alexander is only playing cheap politics like his predecessor Jason Kenney did, by making desperate refugees sound like CRIMINALS.

And trying to turn Canadians against them. 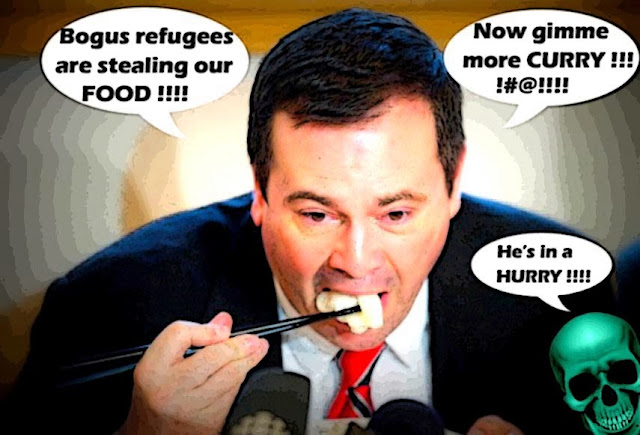 The government strategy to promote this plan relied heavily on pitting seniors and people who were generally unhappy with their own health-care coverage against refugees. When challenged, Kenney attacked his critics, vilified refugee claimants by referring to "bogus" claims and claiming that the health care previously provided through IFH was "gold plated."

And since, if you remember, Kenney didn't like the idea of Alexander taking his job.

Because he wants to keep his grubby grip on the immigrant file to further his own political ambitions. 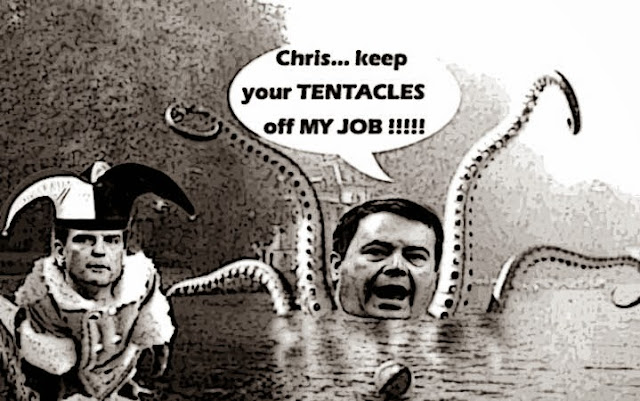 So we can't be sure whose slimy tentacles, or furry paws, are directing this operation.

But what we do know is that it's absolutely disgusting. A crass attempt by the Cons to whip up xenophobia, to conceal the fact that they have brought in a record number of immigrants for their own political purposes, and are flooding us with foreign workers.

So they can have their bloody bone and gnaw on it.

And we also know that Alexander's blind ambition has destroyed whatever was left of his reputation.

And of course we know what we already knew eh?

The depraved Con king Stephen Harper corrupts everything he touches... 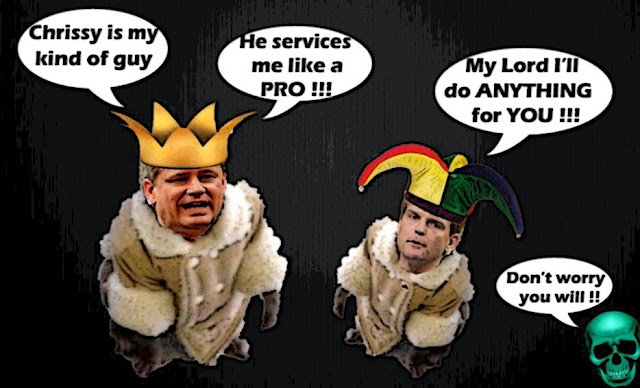 And that if this country is ever going to be clean and decent again.

His stooges must be treated with the contempt they deserve.

And The Great Corrupter must be defeated.

I don't seem to remember Chris Alexander ever having a reputation as a decent guy, but as always I enjoyed your post. I just wonder if we are all prone to give Harper too much credit as a "corruptor" and not enough credit to the run of the mill fool or jerk who is eager to follow the path of corruption. I am often reminded of Bertram Russell's reminder in his essay on power that those who eager follow the abusers of power are no better, and arguably worse, than the tyrant that they follow.

Simon, when I was young, I too grouped all 'seniors' in the same way, assuming they were all a bunch of reactionary old fossils who hated everything progressive...
Now that I am a rebellious old progressive senior, I see the error of my ways..if Alexander and his soiled ilk believe that they are successfully pitting seniors against refugees as a way of getting re-elected, nope, the opposite is true..

Yeah. Chris Alexander was an amoral scum-bag from a long way back. This disgusting behaviour is par for the course for him

I've known Alexander since our time together at McGill, and my best friend dated him until she wised up. He has always been a bilious windbag. Back then he was a brainless Thatcherite - he parroted the worst UK Conservative lines without understanding any of the context or implications. But he's forever being given a pass by a certain class of person. They see only his physical appearance and hear only his rhetorical flourishes, and never go past the superficial to ask whether what he says makes sense. If you know his style of arguing, he's easy to take down. He lies about numbers, all the time, just makes stuff up, so journalists need to demand sources and be prepared to challenge his figures. He is also wooden and nervous - watch any of his appearances against a more relaxed person like Mark Holland and you will rapidly see that he comes off looking and sounding like a sound-bite machine.

I hope he is one of the casualties of the 2015 election. I don't think his ego could handle it, being kicked to the curb by the plebs he hates. First thing he'd do would be to suck up to whoever won, asking if he could have a nice ambassadorial assignment for his service to Canada. Then mom or dad would call up one of their family friends on Bay Street and get him a job as CEO of some mineral or oil company. With any luck he'd grow fat and bald and drink too much and shuffle off this mortal coil before too long.

hi Kirby...well I did say he had only half a reputation.;) But you're right a person who can be corrupted by Harper must be flawed to begin with. And it won't do any good for them to claim later that he fooled them. As you know I'm hoping to be one of the prosecutors---or better still one of the judges--- at the Con Trials for Crimes Against Canada. And I shall dismiss that argument and sentence them to an extra ten years for even daring to suggest it... ;)

hi mizdarlin...it's not just seniors, I'm afraid they come in all ages. Those who can be made to feel resentful that others are getting a batter shake than they are. When in fact as the doctors point out the refugees are only getting the most basic healthcare. But that's the Cons always pitting one group against the other to create wedge issues. They really are evil and have no shame...

P.S. I think rebellious old progressives are the best of the lot... ;)

hi thwap...you know to be honest I don't know much about his background. I only know that he was one of those wretched chicken hawks and cheerleaders who buried us up to our necks in the Afghan war. However I did think he was intelligent enough to not just mouth Con talking points. But I was wrong about that too. He's just another Con monkey and we will have to take him down a peg or two...

hi anon...thanks for this, that's really interesting. I had no idea he was a Thatcherite, and that he misleads people all the time. However, I did know that he's incredibly vain because I checked out some of his professionally produced videos and even Justin Bieber would have a hard time matching Alexander's love for himself. Oh well and a McGill graduate too. Great. Another Con graduate like that one and my degree won't be worth the paper it's written on... ;)

YOU Must be feeling generous today, half a reputation? once he joined the Cons and their attacks on sick people, he doesn't have any. He wanted a cabinet post to further his own ambitions and he has done the work of harper. They are very sick puppies.

thank heavens for the doctors and minister of health for Ontario for doing the right thing. these cons don't care about any one and think the rest of Canada is the same.

Mr. Harper attracts the corrupt, the sleazy, the shady like a magnet. Must be some sort of feeling of inadequacy which makes him uncomfortable with the ethical, the honest, the decent.

AND It occurs to me to wonder how the temporary foreign workers get their health care. And what kind they get,

How can he be anything but corrupt? remember Stephen Harper hired him so they have to be, and are corrupt, all of them or THEIR FIRED.

I remember seeing Chris Alexander about 15 years ago when Chrétien was leading a Team Canada visit to Moscow. Alexander was a senior guy already in the embassy then. He was a slick puppy, very keen to suck up to all the leading Liberal PMO staffers like Peter Donolo and Caroline Chrétien.

During that visit I had drinks with one of the junior trade guys who worked with Alexander at the embassy; they said he was an ok guy in superficial ways - friendly enough - but that he was at heart a rat - would never share info in a timely way with underlings, never had their backs if anything went wrong, and was always the first to hog the limelight. They said even his ambassador at the time, an old hand near retirement, couldn't stand him. They also implied he was sleeping with one of the PMO staff who was there for the visit, though they didn't share details about who they were adamant it was happening. Good career move presumably.

Quite a few years later while I was in Poland I talked with a woman who worked with Alexander in Afghanistan. She said she came in one day to discover he had decided to go on vacation out of the country for a week and hadn't told her or anyone else at the mission. He basically just tossed her the keys to the embassy and told her she was in charge. When she called back to Ottawa later that day to tell them he'd gone awol, they were furious.

I met plenty of other Foreign Affairs types over the 18 years I was travelling for work and the pattern was always the same: no-one junior who'd ever worked with him ever had anything good to say about him. You can put some of that down to professional jealousy at a fast riser, i suppose, but when you can't squeeze a good word out of anyone it says a lot.