Stephen Harper and The Great Darkness 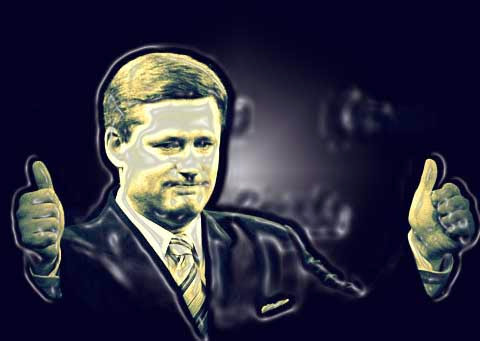 Not many people noticed, but last night was the eighth anniversary of the election victory that made Stephen Harper Prime Minister.

The night the lights starting going out all over Canada.

The beginning of what historians will one day call The Great Darkness.

When Canada was abandoned to the beasts, and raped and mutilated beyond recognition.

And on this fatal anniversary Chris Hall writes that although Great Leader has been badly mauled by scandal, and his polls are tanking, we shouldn't count him out.

The Senate scandal isn't over. Critics are getting more air time to push their view that Harper is too doctrinaire, too bloody-minded, hell, just too plain mean to last much longer.

And yet those who have worked closely with Harper, who have followed his time in office, insist he isn't going anywhere because being prime minister of Canada is the only job to which he has ever aspired.

"The main point is to endure. Not to last for the sake of lasting… [but] to implement a Conservative change in the political culture of the country," Wells says. "And if that means doing something Liberal today so that he can do more Conservative things tomorrow, it is fine with him.''

While I do think Harper will try to hang on as long as he can, if only so he can try to join MacDonald and Laurier as the only Prime Ministers to win four consecutive terms.

And as you know, clinging to power is in his genes... 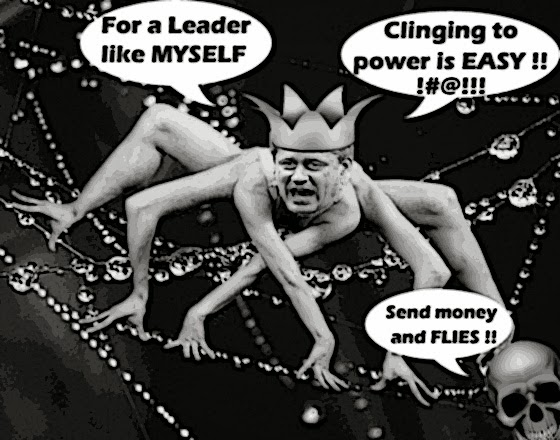 Ever since the first Harper in Canada had to be forcibly removed from office after unleashing a reign of terror on his enemies.

But I really wonder whether the darkness is now so great, that even those who make their living covering politics can't see the forest for the trees. Or the spider webs.

Because while it's true the Cons are buffing Great Ugly Leader up, with OUR money, as you can see in this latest propaganda video.

Which does indeed include a nod to the Liberals... 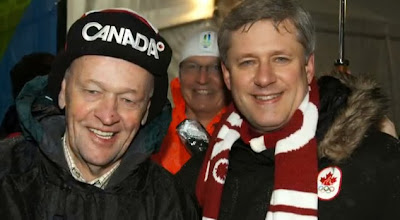 The whole thing reeks of desperation, and nothing can change Harper's dire situation.

His polls are down to as low as 28% and showing no signs of rebounding. Even some in his base are abandoning him. Never have so few Canadians thought he was leading them in the right direction. Or the mood been so sour.

The Senate scandal and the robocall trial will maul him further, and wipe the mascara off his face. The economy is showing signs of growing weakness, and cannot be guaranteed to lift him anymore.

And all that even before we get to his greatest liability, the one that can't be measured. The one that will finish him off.

The depth of the hatred so many Canadians have for him and his foul regime. And the widespread feeling that he has been around for too long, and his time is OVER.

Because once that sets in it's almost impossible to recover from ANYTHING.

Which explains why neither Harper, nor the Con Ministry of Propaganda and Disinformation, mentioned today's anniversary, after having trumpeted it in previous years.

Because they don't want to remind Canadians how long he has been in office.

Lest he scare them further... 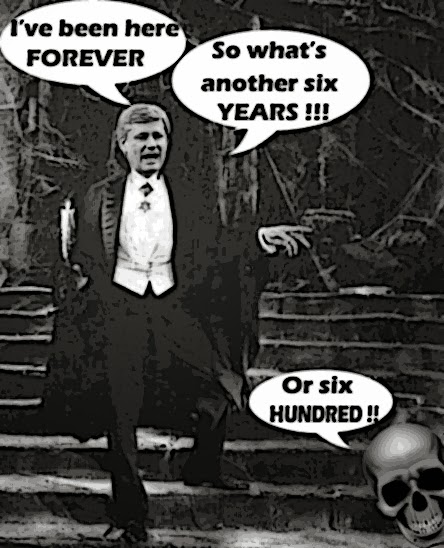 But Chris Hall is right about this:

He will stay as long as he can win. He will leave if, and only if, it's clear he can't. Harper's grip might be slipping. But he'll never make the mistake of letting go.

Which is where we come in eh?

Because he only has about a year to decide whether to stay or go. Jason Kenney will make sure of that.

And if we attack him harder than we ever have before, he will NEVER recover in time.

He's been running from the media for weeks, hoping people will forget all his scandals. But on Monday Parliament returns and he won't be able to hide anymore.

He will wither in the returning light.

The Con mummy will crumble.

And sooner or later The Great Darkness will finally end.... 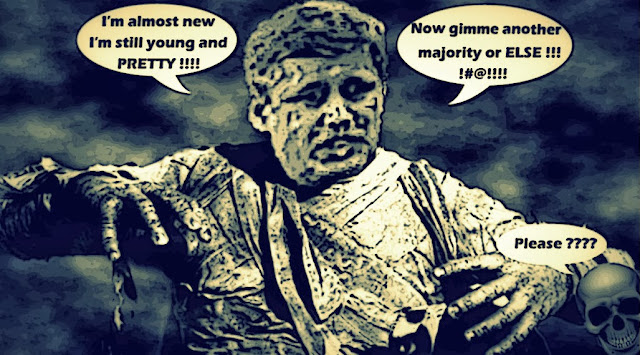 Hi Simon le grande noirceur is indeed an apt description of our times. Harper and Duplessis have much in common Anti unionism, the need to crush opponents and an outsized influence of the church. For Duplessis it was anticommunism for Harper it is islamophobia.

Quebec emerged from the darkness to build a great society, Canada will do the same

One of the worst aspects of the Harper reign of terror is the sublimation of the civic institutions. From the RCMP to the Bank of Canada we have become a third world goverment. With all the players being played by the same talking head disaster is inevitable. What if the Oil Sands was some kind of giant ponzi scheme, whats going to happen to a Canada when that single basket of eggs cracks? The rising dollar hollowed out our industry and now comes the whiplash of a falling dollar to fatten the resource industry but crush everyone else. The Bank of Canada is supposed to set monetary policy, but is seems now Jim Flaraty is pulling the strings directly. Gazebo Tony is wasting billions on consultants, to give cover to the dismantlement of the social safety net. Keep in mind the goverment has starved itself of close to $30 Billion a year in revenue as part of the Economic Action plan. The chief beneficiaries are both welfare cases. Banks and Resource companies. Thats 30 Billion a year transferred fro all Canadians to a selected group.

Simon: Agree that Harper will not recover from this one. As I said yesterday, he is on his way out and even he knows that. Doesn't mean he will not cheat to win if he thinks he can get away with it. However, even Harper knows it will be more difficult to cheat with public attention being placed on the Robocall and Senate scandals.

Remember that 60% of voters refused to vote for him over 4 elections. Why would they change now he has given them even more reasons not to vote for him? Remember also that in 1993, when Mulroney handed over a hot potato to Campbell, the combined Reform and PC votes was 35% (made up of !9% Reform and 16% PC; yes, 16% voters still voted for PC/Campbell despite Mulroney). The average of various polls now have Harper at 28%. I would suggest this is probably is made up of about 19% Reform votes (which will vote for him no matter what) and 9% PC. This suggests that he has lost about 6% PC votes (likely to the Liberals). Question is will he lose a few more of the PC votes he still has? I suspect he will but I think he will bottom out at about 25% votes (i.e. 19% Reform, 6% PC). He will not go lower than this because of his solid Reform base and the fact that some of the PC voters are still deluding themselves that they still have a party.

Herein lies Harper's problem: some of his friends have come, and gone (to the Liberals, likely) whereas his enemies have accumulated. This is why he is "finito" unless he cheats (like stuffing the ballot box, which some would say is not beyond him).

The real question is whether the Liberals and NDP will attack each other, drive some of the PC votes back to Harper and allow him somehow to eke out another minority in 2015 (a majority is out of the question). It was surprising that while Hall acknowledged yesterday that Harper is down to 28%, he had somehow failed to grasp, IMHO, the significance of this in the historical context of federal votes.

I think we should pressure the Liberals and NDP to use their heads, co-operate and get rid of the big problem in 2015 before they ask voters to vote with their hearts in the election after 2015.

Defeating Harper is merely winning a battle. He could be replaced by someone newer, shinier and worse. To win the war we must shift our culture from a market driven economy to a performance driven society.

THE NATIONAL | Jan 22, 2014 | 10:31
Stephen Harper: The Survivor
National Affairs Editor Chris Hall looks back on the Harper years and forward to what might be ahead for him.

Quebec built a great society? HAHA, that's a good one!

This is a dangerous man. It doesn't matter what you believe as policy. He is a fascist. He wants to take away our rights as citizens.
There should always be discussions about issues. No one is right.
He says he is right. That is fascism.

This a dangerous man. He is a fascist. I will debate anyone who disagrees.