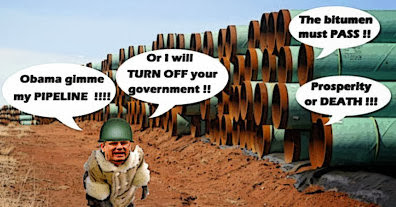 Well as you know he's been putting pressure on the Obama administration to approve his Keystone XL pipeline.

And so have his Republican buddies.

Republican leaders in Congress are planning a legislative offensive to force the White House’s hand on the Keystone XL pipeline decision if the Obama administration does not declare its support for the project in the coming weeks.

Eric Cantor, the House Majority Leader, said Republicans are considering attaching a Keystone decision to a new law to raise the debt ceiling, which may be needed by the end of February for the U.S. to avoid another financial crisis.

But it's all going horribly wrong.

The Republican move could backfire.

By further politicizing the pipeline decision, the Republicans may be doing more harm than good to TransCanada Corp.’s lengthy effort to win a presidential permit. The Republican agenda is as much about embarrassing Mr. Obama in the politician realm as it is about getting a pipeline built – if not more so. If they impose a deadline that is not to Mr. Obama’s liking, they could give him the excuse he wants to punt a decision once again beyond a looming election.

And when Americans tune in to watch Obama's State of the Union speech tonight they'll be seeing this ad...

Which I'm sure will make Great Pipeline Leader very unhappy.

Prime Minister Stephen Harper will make a cameo appearance on an international stage Tuesday night — though it's hardly one he would have chosen. The prime minister will be cast in the villain's role in an anti-Keystone XL pipeline ad airing during the U.S. broadcast of President Barack Obama's state of the union address.

Especially so soon after this one...

Because it won't exactly buff up his image in America eh?

Not with Obama seeing him now as just another Republican, or Canadian tea bagger.

And not with the American people regarding him as a Chinese agent, or a Gaddafi or something, who would make SUCKERS out of them.

Gawd. The next time Harper visits America he's going to have to take his own TANK.

Which is why something tells me that Stephen Harper is hoping that not too many Americans will watch that ad.

Because then they will know what we know eh?

The Keystone XL pipeline is not good for Canada, or America, or the planet. 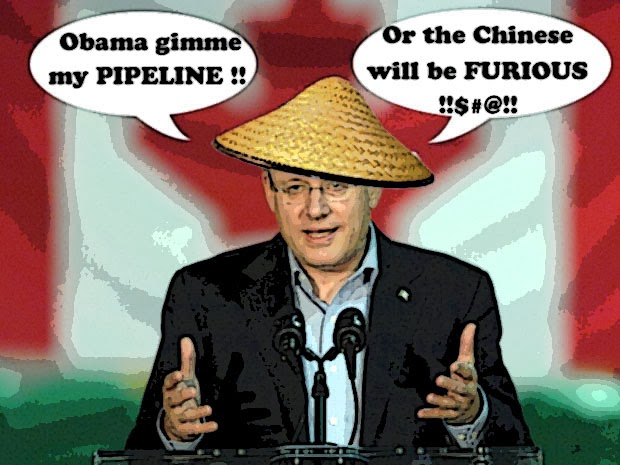 The economics of Keystone make no sense. Pump this crap 6000 kilometers to Texas so they can export it to Argentina. As Neil Young clearly revealed the Tar Sands, if they were liquid we should call them oil sands take half the energy used by all the cars in Canada just to make the slop ready for refining. This seems to be a very similar economic plan to a Mafia bust up, or the former KGB biz of selling Russian resources for pennies on the dollar.

Also Simon I wanted to bring to your attention some righteous programming for progressives.

As a Canadian I can say our Prime Minister and his governing cronies have sold us out also...

Stephen Harper, you're a Fascist pig, an a$$hole and an infidel!!
~May Your Next Steak Dinner Give You The Bubonic Plague~

This is anti-Chinese racist bullshit.

Stephen Harper is a traitor to the Canadian people.

Stephen Harper is the most diabolically clever idiot I've ever seen enter the political scene.

Nice to see more and more people are realizing the planet is suffering. Open your eyes Canada.take a stand!

Baird goes on CBC and claims msnbc is biased even though it has hours of conservative programming daily. What he really means is that fox is the only news source that godly folks should trust.
In Vancouvers chinease new years parade they do not want natives to participate because of their anti pipeline position.
Epoc news constantly criticizes the CCP but never a disparaging word for Harper .
What this is all about is the almighty dollar

Lets hope Obama rejects the Keystone pipeline. Canada doesn't need it and neither do the Americans. The tar is or other countries. #Why should we in North America destroy our enviornment so another country can make a profit and pollute our air. /recent reports say the air pollution from China is now hitting the west coast of North america. We need to stop sending coal, gas, oil, etc.

Airborne paticulates from Asia have been reaching the west coast of North America for years. L.A. believe it or not has reduced emissions, better cars etc., so now they have to import part of their smog to keep up their reputation for smog!