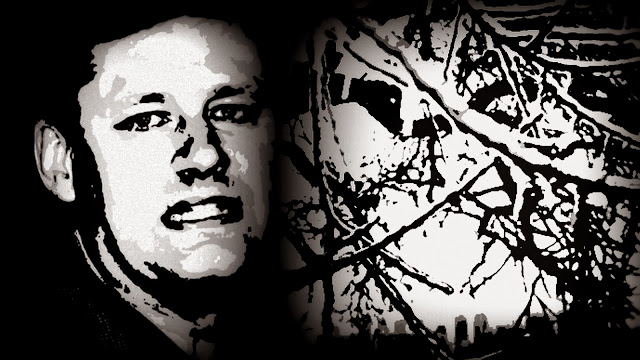 The other day I wrote about how Stephen Harper had betrayed the people of Central and Eastern Canada.

By shrugging off the suffering of an estimated one MILLION Canadians who lost power during that massive ice storm, and were left freezing in the dark for DAYS.

Treating it like it was nothing, just like his Con buddy Rob Ford who refused to declare a state of emergency because it would have caused him to lose even more power.

Not just for all those left freezing in the dark, like Kathleen Holding.

A state of emergency is for the Kathleen Holdings of the world. The official announcement doesn’t change the stakes or the seriousness of the disaster, in this case, but it does relieve the sense that you’ve been forgotten.

But also for those who didn't lose power. And found themselves living in a divided city.

Where as you can see in this photo, half the city was ablaze with light, and the other half was in darkness...

The most bizarre and surreal elements in Toronto’s ice storm this past week weren’t the strewn tree limbs and collapsing wires, but the relative quiet and serenity in neighbourhoods— like mine—that remained largely unaffected, and the influx of Instagram photos chronicling the storm’s icy beauty. The small swath of the city I live in was so undisturbed, I might have been a citizen of another country.

Creating a surrealistic situation like the one in this famous painting, by the Flemish renaissance painter Pieter Brughel, Landscape With the Fall of Icarus.... 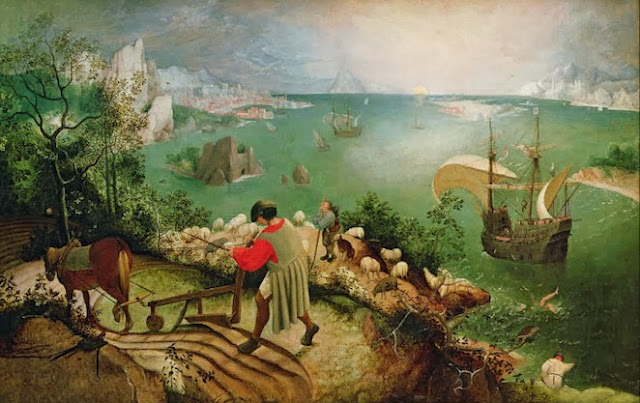 The strange thing about Brueghel’s painting is that, for a person seeing it for the first time, Icarus doesn’t appear to be in it: It’s just a peaceful landscape, farmland over an ocean bay on a sunlit day, a beautiful ship sailing across the water. It’s only when you look closely at the lower-right corner of the picture that you notice a pair of bare legs disappearing, upside down, into the sea, with feathers floating down around them.

In Brueghel’s Icarus, for instance: how everything turns away / Quite leisurely from the disaster; the ploughman may / Have heard the splash, the forsaken cry, / But for him it was not an important failure . . . and the expensive delicate ship that must have seen / Something amazing, a boy falling out of the sky, / Had somewhere to get to and sailed calmly on.

And finally to reach the same conclusion I did:

A state of emergency says: “This disaster is important. Do not sail calmly on.”

But Stephen Harper did sail calmly on, refusing to let it interfere with his comfy holiday, issuing only two pathetic TWEETS during the week-long crisis. Ignoring the suffering of a million people because he didn't care, or they weren't Albertans.

And for that he can NEVER be forgiven. And he will pay for it big time in the next election.

Which of course made me feel real good eh?

But not as good as I felt, when I noticed the new cover of Now magazine, and the caricature of Rob Ford as a pig... 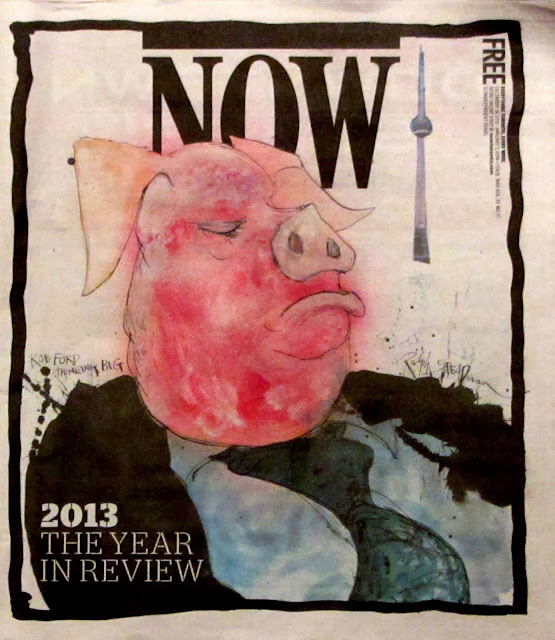 And realized it was by none other than the legendary artist, and illustrator of Hunter S.Thompson's books, Ralph Steadman.

Because then I felt like saying, Ralph, Ralph you magnificent old genius where did you get such a good idea? 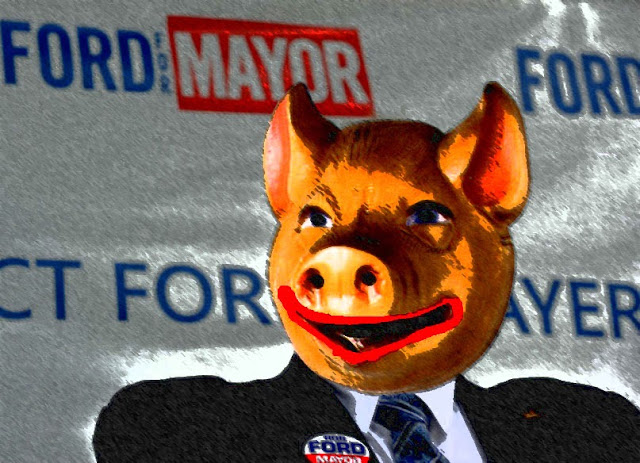 And how did you know we had such a Con hog problem? 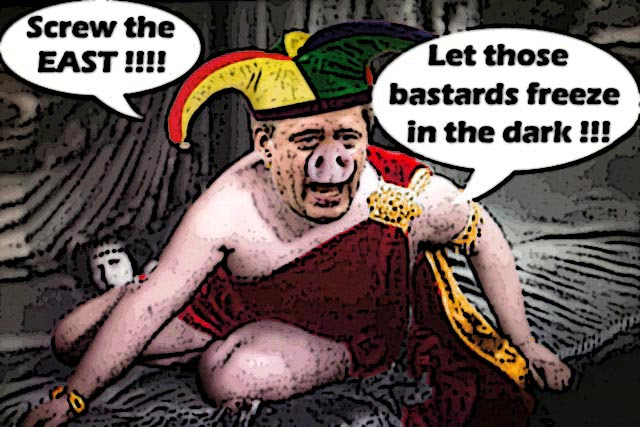 Tomorrow we will make them BACON...

Steven and Ford are both guilty in this, but Liberal Premier Kathleen Wynn is just as bad, just because she's not a Tory doesn't mean she should be given a free pass. She knew Ford was in disgrace and why he refused to declare a state of emergency, she should have removed Ford and declared a state of emergency herself instead she let the people of Ontario rot in the cold dark and I was one of these people for Seven days.

As such Ford, Kelly (and his trip to Florida during this crisis), Wynn, and Harper can all go to a cold hell.

Still lying to yourself, Simon? Day in and day out. Ought to seek help for that you know.

This is the second time some one has posted Bruegel today I love his work and as is the case here one must look closely, he hides so much in the background

Pigs are actually very intelligent animals, up there with dolphins and elephants, who have a complex social organization. We do a disservice to pigs to compare Harper and Ford to them.

yes Anon. 5:16 p.m. is quite correct. Pigs are very intelligent animals and we should not compare politicians to them. Pigs are far superior to most Canadian politicians. Pigs look after their young. Federal Conservatives don't.

Harper's lack of interest in the deep freeze of the east is simple. he didn't care about those living in the north, in inadequate housing, with inadequate heat, with inadequate water. Perhaps we can look at this from the positive side. he lets everybody freeze in the dark. Its nothing personal. He doesn't care about any of the citizens unless they are from China with a big cheque book. Hopefully, when people go to vote next time, they will remember their time in the cold and dark, but I'm doubtful.

It was very simple, if a state of emergency was called, Harper would have had to have national defense spend money. that can't happen, he needs a balanced budget more than the citizens need warm homes. All that matter is stevie and his need to create a canada as he sees it should be. We voted for him, we got what we deserved (well not I personally voted for him...) Perhaps come election time people should go out with signs reminding others of how they all were without power and no assistance from the federal government. This people may understand, Of course we didn't see any other party leaders out their either.

hi Ryan...I'm sorry to hear that you were without power for so long, and I don't blame you for being angry. And your also right that Wynne had the power to declare a state of emergency. But it might have caused a political flap in the middle of a crisis, with the Ford Nation claiming it was a coup, and she did at least make it known that she was acting as if a state of emergency existed. However, I have to agree with you that at a time when inspirational leadership was needed it was sorely lacking...

hi anonycon...Gawd. Still hissing like some frosty demon, through the icicles that are your teeth. Are you so deluded as to not be aware that the vast majority of Canadians now consider your Lord Harper the biggest liar in the land. Why would I lie to myself when I don't have anything on my conscience unlike him. But yes, day in day out, blogging for the day he is defeated. And having a hoot !!!! Aren't you jealous? :)

hi Kev...yes it is an incredible painting and when I was a boy I was fascinated by how the worst things can happen in beautiful places. Now of course the situation is reversed, the landscape would be hellish, and we'd have to look with a magnifying glass for the small act of beauty. Whew. Lucky I'm an incurable optimist eh? Happy New Year !!!!

hi anon...thanks for raising this subject, because believe it or not, it is one over which I agonize. You see I'm a huge animal lover. I could not stand to see one hurt or slaughtered. And if you don't believe me go ask Charlotte the massive and extremely friendly pig at little Far Enough Farm on the Toronto Island. Because she knows that I think she's fabulous. And definitely better than Harper. But then the pig I use is not a REAL pig. If you look closely you can see a metal thing in its mouth. It's the product of an experiment gone terribly wrong. They set out to create a race of Super Cons, for their one-thousand year Reich, but somebody got the genes mixed up, and now we see the tragic results. real pigs wallow in the mud to keep cool but are actually quite clean in their habits. But the Cons are of course filthy and wallow in the mud because they can't help it. However, don't worry, I've heard that some of them are turning into rats, and I wouldn't be surprised if some of those rat people turned up in my blog... ;)

hi e.a.f...you may be right, it may have been a simple budgetary decision. The Cons are desperate to save up enough money so they can bribe voters in the next election. But it doesn't really matter. What matters now is that we are at the beginning of the next election campaign so we need to get focused, hit the Cons harder than ever, and the opposition parties need to really get their act together and start mobilizing the population against the Harperites. Because now the end game begins, and failure is not an option...