Will Stephen Harper Take a Walk in the Snow? 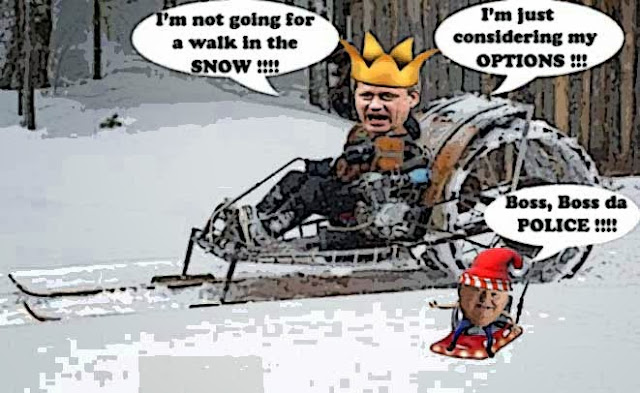 He hasn't been seen for days. He wasn't able to offer any support to a million victims of the ice storm.

His weird Christmas message has some people in Ottawa wondering whether he is having a nervous breakdown.

So it's not surprising that some are also wondering whether Stephen Harper will soon be taking a walk in the snow.

The latest Nanos Research polls show a Canadian electorate in a winter of discontent, consigning the Harper government to the dumpster on a broad range of key issues...Pollster Nik Nanos says he has hasn't seen numbers this bad for the Conservatives since Harper first led the party to power in 2006.

But these assessments aren't the worst of it for the PM and his party. Polls show public antipathy towards them is hardening.

Great Ugly Leader has lost his Teflon coating, and the troops are growing restless.

Internally, there are signs Harper's once iron fist is losing its grip on party discipline. And the worse things get for the Conservatives, the more the troops are beginning to rebel. One example: Conservative insiders say there are more than 30 Tory MPs ready to defy their parliamentary whip if necessary to support a private member's bill to reduce the almost omnipotent powers of party leaders.

Just ask Jason Kenney and all the others who want his job. 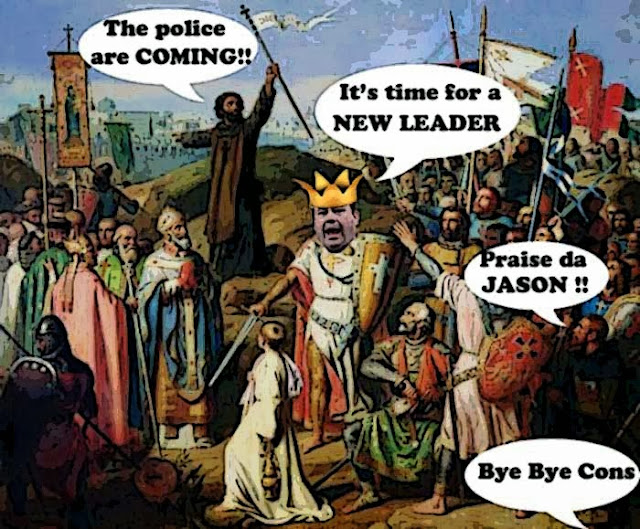 Peter MacKay is working on his French. James Moore is losing weight. And Jason Kenney is working the room at a pub full of journalists hosted by his staff. Meatballs, devilled eggs and drinks on the house. It has the feel of a hospitality suite. The kind you’d find at, say, a leadership convention. But of course there’s no race on. Not yet.

Because they wouldn't be so blatant, if they didn't think that job might become available sooner than most people imagine. And besides what else could account for la Jason flogging DEVILLED eggs?

And then there's the police.

It could even get much worse, especially if police end up charging Harper's former chief of staff, Nigel Wright, or anyone else from the PMO, in connection with the $90,000 cheque to disgraced Senator Mike Duffy. Charges against any of the senators or others involved in the unfolding fiasco could keep the issue in the news for months, if not years, and likely provide Canadians with even more details unhelpful to the prime minister.

And not just the Senate scandal but maybe the Robocall scandal as well.

This may also be the year election authorities finally get to the bottom of the insidious robocalls that were designed to send thousands of Canadians to the wrong polling stations in the last federal election. No matter what the outcome there, it is unlikely to enhance the Conservative brand.

And when you add it all up, and look at the way Harper is behaving, you can see  why the Cons are so desperate.

"Maybe they just have to hope Justin Trudeau's leadership blows up, Tom Mulcair does relatively well, and the economy is booming by 2015," Nanos says. Failing that, next New Year's Eve may well find Stephen Harper at 24 Sussex Dr., contemplating a walk in the snow, following in the footsteps of an earlier Trudeau's famous winter stroll straight out of politics.

And my prediction is he won't wait until next winter. If he doesn't resign shortly after returning from his trip to Israel, which I think is still a possibility considering his state of mind, he'll be gone by next summer. If the police don't arrest him first.

And all I can say is, how times change. And although I realize it is the dark of winter, and we've become a very gloomy country.

I feel sure that sooner rather than much later.

The mad King will surrender to reality.

And the announcement will come... 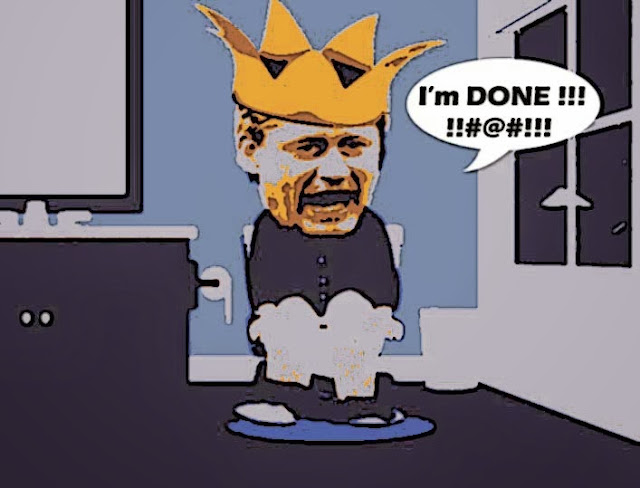 We don't even know? How much of Canada Harper has signed away. We know Canadians are losing their resource jobs, mostly to Communist China. Harper is selling our Canadian farms to China. There was also 800 hectares China paid for at Prince Rupert. That is where China is building their LNG plants.

As more and more of Harper's foreigners are trained for the oil patch and BC mines? More and more Canadians will be laid off. Nor will any of us trust Harper's inspectors that will be looking to see, if foreigners have been hired in place of Canadians. China sued in BC, to take 200 mine jobs from BC and Canadian miners.

Everything Harper even remotely touches, will be contaminated with corruption. Harper is far too arrogant and stubborn to step down. Harper uses every dirty tactic in the book, to stay in office.

oh, to be young and hopeful! yes, if he doesn't move on when he returns from Israel, he is in it for the long haul. many politans know if they simply stay, it will all blow over. He could win another term, if Mulcair, and/or Trudeau fuck up somewhere. Nothing is over until the fat lady sings.

It was interesting to read the list of "those to watch". It listed a number of 40 somethings who may want stevie's job, which they should go for sooner than later if they don't want to be leader of the opposition.

Moore is on the list but all anybody has to do is run his comments on the vancouver radio station about its not his responsibility to feed the neighbour's kid.

If New York can get a new Mayor, perhaps Canada can make some changes also.

Awesome, as usual! O, i'm hopin and prayin Simon, that this all comes true! and if I had to choose by which method?, think it would have to be his arrest!! Now that would see a nation-wide party such as this country has never seen! Can you imagine?? lol

hi anon...Harper is arrogant, but he has been shaken, he has shown moments of great personal weakness, as he did for a while during the Prorogation scandal, and the thought of losing to a Trudeau probably gives him nightmares. So he might decide it's better to get out now, or at the latest by next summer, before things get worse...

hi e.a.f...you don't have to be young to be hopeful. Hope for a better world is something one should carry to the end of your life. And it's definitely better than being grumpy and gloomy.Whether Harper quits now, or in a year, or is defeated in two, it's only a matter of time....

hi cheena...thank you, I'm glad you like it. I know a lot of people probably think that I'm too optimistic. And optimists are often considered to be either naive of idiots in this very gloomy society. But optimism keeps me bouncing along like the Eveready Bunny, and these days I'm looking practically prophetic. I said he was rotten, I said he would do great damage, I predicted he would bring down the roof on us and himself, and we've never been closer to that happy moment. And yes, handcuffs would be a BONUS. ;) Happy New Year !!!!

Oh, Simon, I live in B.C. and it is beyond hope. They re-elected the B.C. lieberals last may. child poverty is the highest its ever been at 18.6%. They are selling off government land to who knows who and the province is in debt to the tune of $60billion. There is no hope for B.C. there is hope though for Canada as a whole, if there is anything left after Harper is gone, if he goes.