When the Con Bullies Go After the Bullies 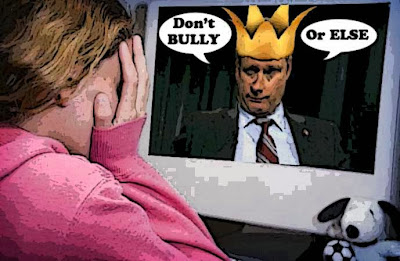 After not lifting a finger for eight years to fight bullying, even though it was killing children all over the country, the Harper Cons have finally decided to something about Canada's bully problem.

Justice Minister Peter MacKay says the federal government will use television and online advertising to raise awareness about cyberbullying and the possible legal consequences of using the internet to torment people.

Complete with an ad for the Porky Action Program in the bottom right-hand corner.

And by releasing this video...

And although I'm glad to see ANYTHING done to fight bullying. And I'm happy to see that the deaths of Rehtaeh Parsons and all those other kids finally forced the Con regime to take some kind of action, I'm not impressed eh?

The ad strikes me as just another clanking cog in the wheel of the Cons' Great War on Crime. Which is aimed more at pleasuring their rabid base, than it is about making kids safer.

And the program makes it sound like cyberbullying is THE problem, when in fact it's just part of a larger problem. And not all young people are bullied online.

Many are still bullied the old fashioned way.

Like Mitchell Wilson, the disabled child who was savagely bullied on the street... 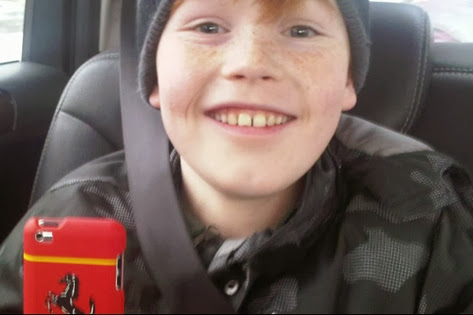 And hanged himself rather than face his attackers in court.

Thirdly, the program completely ignores why some young people are bullied and others are not. And with good reason.

Because that would force the Cons to talk about anti-gay bullying, and their religious base would be very displeased.

Because they want gay kids to be punished, and hopefully kill themselves. And since Harper needs their support so badly, he is only too willing to kiss their asses, or their stigmata, until his own lips bleed.

Fourthly, Bill C-13, which Peter MacKay says will be introduced in the Spring, is just a slightly improved version of Bill C-30, the one Vic Toews tried to foist upon us.

And is still hideously flawed.

Much of the new bill's contents are in fact a re-hash of C-30, the deeply unpopular lawful access legislation tabled (unsuccessfully) by the government last year – that is, much of this new bill is about expanding the government's surveillance powers, just as the last bill was.

Under the proposed law, carriers would be granted a kind of immunity from the criminal and civil consequences of voluntarily disclosing customer information, a sort of carrot offered as incentive to hand the data over without too much resistance.

In addition, as University of Ottawa law professor Michael Geist notes, there is, under the new bill, essentially no limitation on the reasons for demanding personal information disclosures.

And the only real difference in the way the Cons are presenting it, is that while the old zombie Vic Toews sold his bill this way... 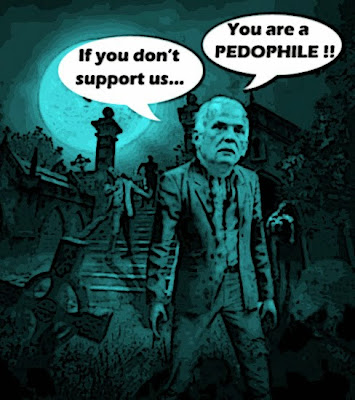 Peter MacKay is selling the latest version this way... 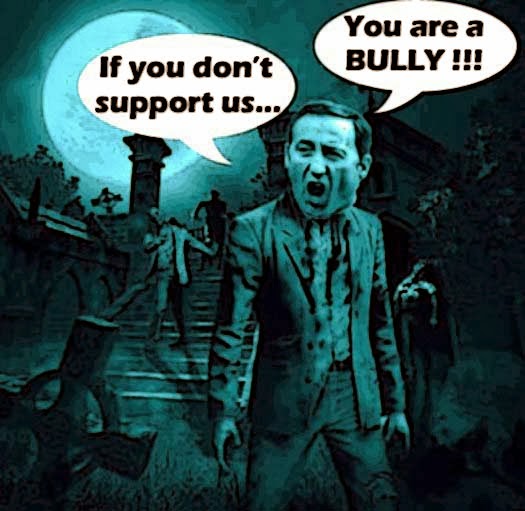 How could anyone expect the Cons to take bullying seriously? Or do the right and decent thing.

When their deranged leader is the worst bully this country has ever seen.

The one who most recently reduced  grown scientists to tears, by destroying their life work.

By burying it in landfill or BURNING IT. 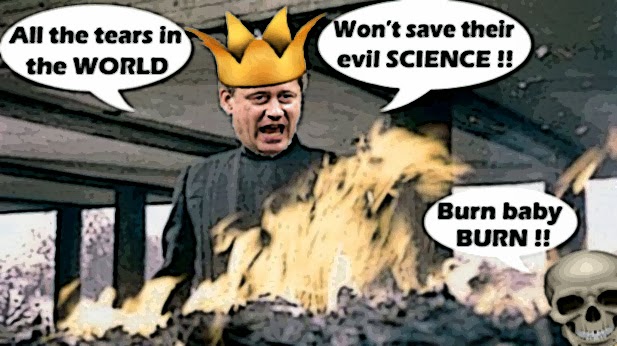 To think that grubby political thug could claim he is against bullying is nothing less than obscene, and enough to make me VOMIT.

Oh boy. You know I care a lot about fighting bullies. You might call it MY life work eh?

I can't wait for the day they are driven from this earth, and take their cruelty and their wars with them. For they are the root of all evil.

But I long ago realized this:

If we want to save the children. And ourselves.

First we must save our country.

And defeat the Bully King...

Destroying books reminds me of a similar event that occurred in Germany before WWII. And bullying was a feature of the Brown Shirts who were the goons who carried it out. Hmmm, who are the Brown Shirts in this case?

Hypothetically, the messages those teens could have been exchanging (since there is absolutely no indication of what the content was in that useless ad) could have been details about attending an anti-pipeline, anti-tar sands demonstration.

And essentially that is what the repackaging of Vic Toews' spy bill amounts to - giving the government a great deal of surveillance power under the guise of protecting us from pedophiles, child pornographers and bullies.

Hi Simon the Toronto Star is looking for ideas to fix Toronto
Here is what I submitted. Think aboot your own offering.
http://www.thestar.com/news/gta/2014/01/11/whats_your_big_idea_heres_what_some_of_you_are_telling_the_star_hume.html

He who writes the past controls the future.

THE AD SIMPLY REMINDS ME OF ADULTS BULLYING CHILDREN.

Children bully other children, because sometimes they don't know any better. They are being raised in a world where those with the most power get to decide how the others live, work, die. You turn on T.V. and watch many of these reality shows and the commentors, its just another form of bullying.

This legislation isn't about preventing or dealing with bullying. its simply a way of bullying those who disagree with the cons.

These words are for all to remembe: Those who cannot remember the past are condemned to fulfil it!
By George Santayana

hi unknown...yes it does bring back unpleasant memories doesn't it. Germany had its Brown Shirts, we've got our Blue Shirts. And that assault on science takes us back to the time of Galileo, and is one of the most shameful episodes in modern Canadian history...

hi Beijing...excellent point. I should have though of that myself. Those kind of ads may look simple, but they are the product of all kinds of focus groups and frenzied discussions. And as you point out, what we see on the screen makes the internet itself look threatening. I only hope people are not fooled by the Cons claiming they are fighting bullying. Because nobody wants the bullies to be beaten more than I do, and they can't fool me...

Hi Steve....yes I saw the Star article, and I do have some ideas of my own, like making cars pay a toll to enter the city, like they do in London, England. But no ideas will come to fruition unless we first evict the Frod Gang from power. So I'm just waiting, and waiting for Olivia Chow to declare her candidacy, and I'm off running...

Hi Steve and Kenneth...both of your quotes are excellent and very pertinent. And Big Brother Harpo has of course taken things even further in the wrong direction. Because maybe I'm wrong, but I don't think even Orwell's Big Brother went so far as declaring that Ignorance is Strength. And don't worry Kenneth, we will remember...

hi e.a.f...I agree with you, we do live in a bullying culture. For example, I used to occasionally enjoy watch Gordon Ramsay's cooking show, but his hyper aggressive (and no doubt staged) antics started to turn me off. I hate bullies of all kinds, no matter what political colours they may be wearing. And although I'm not adverse to scaring children into paying attention, the ad is too narrowly focused on the punitive. And as Beijing pointed out, it could be seen as an attack on the internet itself. As I said in my post, you can't trust the Cons to do anything right...