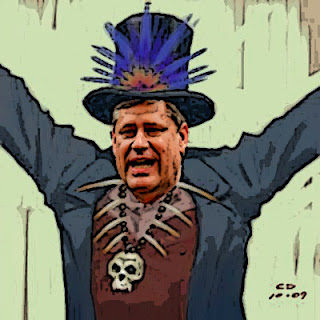 Yesterday, as I was writing a post about Mayan witch doctors, a horrible thought suddenly struck me. Could Stephen Harper be a Christianist Ooga Booga Man? I think the evidence speaks for itself. But you be the judge.

First of all you need to know that Uganda is a barbarous place where gay people are hunted like animals and murdered.

Christian evangelical groups also seemed content to whip up a fury against homosexuals. In particular, U.S. evangelicals held workshops in Uganda in 2009, saying gays aimed to sodomize teenagers and undermine African families. Not our fault, they said, when, soon after, a Ugandan politician introduced an Anti-Homosexual Bill that includes the death penalty for homosexuals. And the Minister of Ethics and Integrity once said, “Homosexuals can forget about human rights.”

And that Harper is also an evangelical bigot, whose Jebeesus jumping church teaches that women are born to be subordinate, and that gays are an "abomination."

Then you should read what happened when a gay radio host from Britain visited Uganda.

“He was scary. He ordered us to cut the cameras then brought a security guard,” Mills recalled. “We ran off and he rang one of our guys saying, ‘Where are they staying? What are the registration plates? I want them arrested. They won’t get far.’”

And how before he was forced to flee, a witchchdoctor tried to "cure" his homosexuality.

Now you should know that like that chicken shaker, Stephen Harper also believes that gays can be "cured."

Because the voices in his head tell him they they "choose" to be gay.

"Regarding sexual orientation...what we are really talking about is sexual behaviour."

Which is why no doubt, why his government continues to treat these Christianist quacks as a legitimate charity.

Even though they can hurt some of those they seek to "cure". And insult all the others.

But then he doesn't care, because he's voted against every bill designed to protect the rights of LGBT Canadians that has EVER been introduced in Parliament.

Yup. Stephen Harper NOT a leader. Just a sinister Christianist bigot, a homophobic witchdoctor. And a REALLY creepy guy.

I suggest gay people picket his appearances during the next election campaign.

So maybe some brave journalist from the maggot mainstream media might FINALLY ask him why he believes that gay people choose to be persecuted.

I'd like Canadians to see him try and answer that question, so they can know him better. And imagine what he might do with a majority.

Down with the bully BIGOT...

harper strikes me as the sort of guy who thinks about sex once in a while and when he does, it takes a couple of minutes to deal with it.

I think his hatred of homosexuals is based on the fact that his right-wing, fundamentalist base hates them, so it's in his political interest to hate them too.

Once harper decides to hate something though, it comes easily to him to let it permeate him.

Hey, Simon, you know I'm with you about Harper and the Homophobes--including our very own Reuven Bulka, until recently a sitting advisory board member of NARTH.

But give the "ooga booga" stuff a rest, OK? Seriously, that's some of the crudest racism I've seen in progressive ranks for a while.

Shamans (not "witch doctors" or "chicken shakers") play a central role in many regions of the world, and many of them possess a lot of wisdom. Obviously the man in question was not one of the latter, but you used pretty broad strokes there, my friend. From Africa to Australia in one bound.Good grief. And a "comical" costume, too.

For the record, the barbarians in Uganda derive their homophobia very largely from evangelical nutcases--guess where they got that from?

I'd take learning from a shaman over a Latin-mumbling priest most times.

hi thwap...yes I think you're right. He may be primarily interested in appeasing his rabid base.
But he is also a man of base feelings. I can't forget the frenzied way he went after women's rights as soon as he took office. That wasn't to please his base, it was to pleasure himself.
And if he ever gets a majority it will be a horror show...

hi anonymous...sorry I can't help you, I don't understand it myself.
I can understand being a conservative on fiscal and other matters. But joining a party that doesn't respect your rights is unthinkable to me.
I was re reading an article recently about how being conservative is a mild form of mental illness. So until I know better, I'm going with that... ;)

hi Dr Dawg...well I have to say you're the first person to ever call me a racist. But don't pat yourself on the back too much, because it's a dubious honour. I mean are you serious? I write a post about the most murderous homophobia, and how Harper is subsidizing a Christianist group that treat gayness as a disease, just like that African quack does.
And you respond by accusing me of insulting shamans all over the world? I assure you I treat any homophobic Latin mumbling priest, rabid rabbi, mad mullah, or chicken shaking witch doctor or whatever with exactly the same measure of contempt.
Any BTW before you pen another paean to the Ugandan shamans maybe you should do some research.

Anyway the point of my post was to encourage more people to ask Harper why he believes gay people choose to be gay, and is that why he is openly discriminating against them?
These things affect my life not yours. It's my humanity that these bigots are degrading and I have every right to fight back against them. You know I used to think you were just old fashioned, but now I think you are incapable of empathy.
Very cerebral but dead inside. Have you ever been diagnosed as a clinical psychopath? I don't mean that as an insult, I'm genuinely curious. Or maybe it's just humourless.
Because I have to tell you I find that halloween costume quite attractive, and I'd LOVE to wear it. With nothing on underneath.
Happy Valentine's Day... ;)

I didn't call you a racist. I said your post was racist, and it is. But don't take an ageing psychopath's word for it--ask any of your friends of the African Canadian persuasion how they like that "ooga-booga" stuff.

You can get your point across about Ugandan anti-gay terrorism without that.