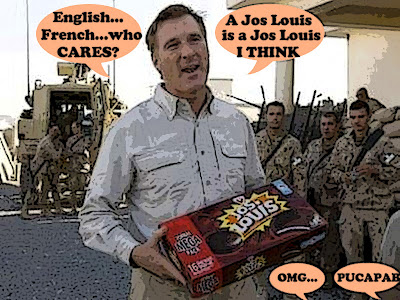 Well I see that Maxime Bernier, the Boob from the Beauce, has made a fool of himself. Again.

“It’s like in Quebec — we don’t need Bill 101 to protect the French language over there,” Bernier is quoted as saying. “They know we speak French in Quebec and we will speak French for a long time, I believe it.”

Now I could go into a long explanation about how Quebec's language laws are one of the best things that ever happened to Canada. Because they took the wind out of the separatist's sails, and gave French-speaking Quebecers the confidence they could be Québécois AND Canadian.

But I don't have the time or the energy to explain the obvious.

So this is all anyone needs to know:

(1) The only reason Bernier made the remarks is because he's running hard to replace Stephen Harper and he hopes to build a base of support in English Canada.

(2) The only reason Stephen Harper puts up with his naked ambition, is because he knows that after the moll and the Hell Angels Maxie will NEVER be Prime Minister of Canada.

(3) The only party this will help is Pauline Marois' Parti Québécois, who have been trying to strengthen the language laws without much success. Because that's all they got eh?

(4) All this really proves is that Bernier is incredibly dumb.

I did not expect to create such a storm by expressing my belief that we should let people act like free and responsible individuals, including when it comes to protecting their language, instead of relying on government coercion to do it for them.

He didn't? Oh boy. If he loses any more I.Q. points we're going to have to water him.

Yes I know, I know. I did tell you a few months ago that him and Stephen Harper went off to see the Wizard... 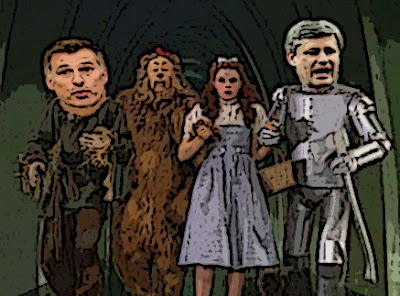 But I forgot to mention that the story didn't have a happy ending. The Wiz said Harper didn't deserve a heart. So he's STILL a monster.

And he could only give Maxie half a brain. So he's STILL an idiot.

Of course, this isn't just a laughing matter eh? Stephen Harper needs to explain why one of his MPs is aiding and abetting the separatists. Who needs a separatist coalition when we've got the separatist Cons ?

In the meantime, I must say I like this new Liberal ad...

Because it reflects the creative and fun-loving spirit of the wonderful Québécois Nation in Canada.

And honestly, in French or English, or any other language.

That vid is cute and fun...entertaining. But the opposition parties, the liberals in particular are going to have to turn up the heat on those ads. Truth is, and various polls were taken, about half the country likes 'em and/or thinks they work and they do. Truth is, folks can groan out loud about the attack ads, but in reality, they're a guilty pleasure, much like Neil Diamond and disco--they can't get enough of it behind closed doors, but will never own up to likin' 'em.

Dan Delmar on CJAD, after 1st wave of Harpercon attack ads, practically launched a challenge to Iggy saying, "Harper just attacked you! what're you going to do?" He went on to say that Iggy isnt' "sexy" enough.

And let's all remember where being the sincere gentleman and the high road got Stephane Dion--nowhere...they're going to have to take to the same gutter as the cons.

When I first heard this the thought occurred to me that by attacking French language laws they prop up the bloc taking away seat from the liberals.

Being that the Cons could care less about Canada, it seems their style.

As for the language laws, my family and I have a personal history with them and there is a reason I can't speak French anymore....

hi ck...I don't disagree that attack ads may be needed. I'm working on a couple myself ;)But right now these softer ads can make the Cons look bad. Remember that so far the Cons attack ad campaign has cost them points in the polls. They look like nasty partisans, while the Liberals look more noble. It's like that game of scissors, where when you're opponent flashes a rock, you wrap it up in paper...

hi Peter...you're right about how attacking the Bloc can only help the Harperites by making the Bloc more popular.
And I do think that Harper will campaign against Quebec in the next election. But I believe that in this case Bernier is freelancing.
As for the language laws...all I know is that it did encourage a lot of anglos to get off their asses and learn French. And as I said in the post, nothing but nothing hurt the separatist cause that much.
Right now the real problem is improving the teaching of English for French-speaking kids. Because being bilingual really is the best of all worlds...

As for French flourishing in Quebec based solely on the will of the people, Bernier should take a look at how much language and culture has been lost in French language communities outside Quebec. I know in Manitoba they are struggling to capture what was lost in just three or four decades without protection or incentives.