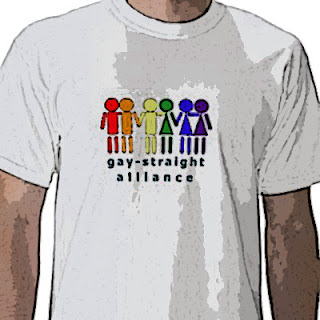 After reading about how the Halton Catholic School Board has decided to deal with it's controversial ban on the Gay Straight Alliance.

On paper its ban on gay-straight alliances is lifted, but a new draft inclusion policy by the Halton Catholic District School Board doesn’t allow them either.

By disappearing the word "GAY." And treating gay kids like they were diseased.

While the document calls on educators to enforce anti-discrimination policies, it also reiterates the church’s official prohibition against sexual activity between two people of the same sex and exhorts teachers to lead “the homosexual student” toward “better sexual morality.” It further suggests that “romantic attachments and behaviour” are fully expected of heterosexual couples, but discouraged among gay students.

Or less than human.

All I can say is when are we going to stop funding religious schools?

The Catholic Church shouldn't be allowed anywhere near children

We were born this way. You bigots.

And way to go Maria.

“Can't stop crying watching this. This is why I make music,” the singer tweeted. “She is the future.”

It is long past time to eliminate public funding for Catholic schools here in Ontario. By funding their schools we are giving the state seal of approval to their hate and bigotry.

If any other group made the statement
to lead “the homosexual student” toward “better sexual morality.” It further suggests that “romantic attachments and behaviour” are fully expected of heterosexual couples, but discouraged among gay students.

they would lose their funding in a heart beat, with every politician lining up to denounce them in the strongest terms. Nothing less is acceptable for this transgression.

... and exhorts teachers to lead “the homosexual student” toward “better sexual morality.” It further suggests that “romantic attachments and behaviour” are fully expected of heterosexual couples, but discouraged among gay students.

That is just being unacceptably intrusive into students' lives.

Isaiah 11:6
The wolf will live with the lamb,
the leopard will lie down with the goat,
the calf and the lion and the yearling [a] together;
and a little child will lead them.

My students made a "It Gets Better" film involving a huge diversity of kids at our high school. Lots of kudos. Then another teacher, out of the blue, said, "Do you know a faggot is just a bunch of sticks - so it's not really a problem calling someone a faggot - you're just calling them sticks."

I did the history lesson about witch burnings and presented other ad hoc lessons, but he thought he was just so clever. I ended with, "You know, if you tell the kids it's okay to call each other faggot, they'll still get in trouble with the office." It's all I could do at that point.

hi Kev...it's ironic that a school system that presumably was set-up to counter discrimination against Catholics, should now discriminate against others.
But that was then and now is now. I realize there are a lot of good teachers in the Catholic system, but clearly there is something wrong when Ratzinger's miserable minions are allowed to impose their hateful views on children.
I'm a big believer in a secular public school system for all children, and that's where our tax dollars should go...

hi Marissa...Yes it is and cruel too. How dare these miserable creatures tell people who to love.
As I told Kev, the sooner we defund them the better...

hi anonymous...that's a beautiful thought, and the best of Christianity.
Too bad so many so-called Christians can't act like their
saviour intended....

"Do you know a faggot is just a bunch of sticks - so it's not really a problem calling someone a faggot - you're just calling them sticks."

OMG. How could someone say that. Don't they know what those "sticks" were used for?
Oh well, when I hear about people like you, and kids making It Gets Better videos, I feel very encouraged. And it restores my faith in humanity.
Good for you and your class, and if you put the video on YouTube, let me know and I'll run it... :)