Stephen Harper and the Death of Canada 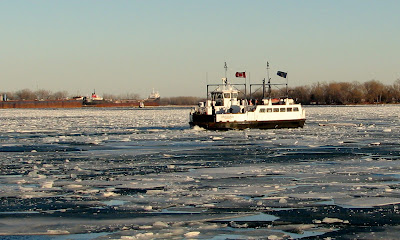 I usually love this time of the year. When the ice starts to break up. A warm wind roars in from the west, and drives the pieces towards the island.

And into the ferry channel.

So the old tug has to ride to the rescue. 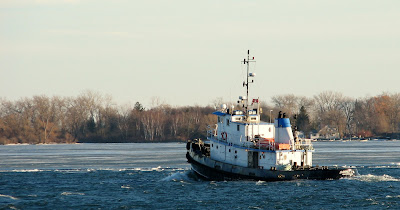 And you know that soon it will be Spring. At last.

But this year Spring will bring with it an election, or another surrender. Stephen Harper could win a majority. And who or what will save Canada?

When after everything this deeply disturbed political thug has done to degrade our democracy, and our beautiful country, so many Canadians would still vote for him and his brutish Cons.(PDF)

The Conservatives have strengthened their lead with boomers who are much more likely to actually vote. The Conservatives now have comfortable lead in seat rich Ontario and even enjoy a very significant lead in the census metropolitan area of Toronto. The Conservatives also now lead the Liberals in Quebec and among those born outside Canada, which is a major turnaround.

The easily bought, the greedy ones. The ones who sold out a national daycare program for a $100 a month. The ones who thought the Cons were good money managers. When they are just quacks and crooked hustlers.

Vaughan, the so-called battleground riding that recently switched from Liberal red to Tory blue, received funding for a whopping 136 projects. That’s 136 billboards for the government. It’s at the top of the list for all of Canada, but that doesn’t even begin to tell the story.

Who would do ANYTHING for a majority.

The ones who didn't care when Harper lied about torture in Afghanistan, or when he gutted the census and made ignorance a virtue. Or when he let a Canadian kid rot in Guantanamo, or attacked women's rights like a rabid dog, or discriminated openly against gay Canadians, or torched the planet to please Big Oil.

The ones who let him pose as a patriot. When no man hates OUR Canada more than Steve does.

Canada is a Northern European welfare state in the worst sense of the term, and very proud of it.

The ones who shrugged their shoulders when he raped our Parliament, and turned it into a stinking sewer. The collaborators in the corporate media who knelt before him with starry eyes, inhaled his farts, and called him a political genius.

The rabble who didn't care as he turned a Canadian government into a criminal conspiracy.

“His [Harper's] DNA is all over this crime scene,” Cuzner said.

And then there are all his other little helpers. The boomers who only care about their stocks, and keeping the young in line... or in jail. The young who don't vote because they don't care who is in power, as long as they don't tax their i-pods.

The progressives still stuck in the 20th Century who couldn't put Canada before their parties. And would rather fight each other than fight the real enemy. Even as our country BURNS.

And now it may be too late. The election is coming.

The day of reckoning is here.

And so is the undertaker...

You know, I think that's the best dramatization I've ever seen of what a Harper majority might look like. Since the 1956 version of "1984."

And Stephen Harper makes a great undertaker. Or is he the mad minister?

But a lot of other people helped bring down this country. 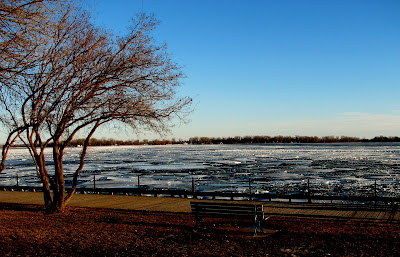 An excellent post as always. I am a baby boomer and have never voted Conservative in my lifetime and I never will. Some of us baby boomers are smart old gals and would never fall for the abuse that we see committed by the Conservative Party. Simon, we must never feel defeated by what is happening - we must gather the strength to support and speak about our commitment to democracy and social justice.

hi Grandma...I'm glad you liked the post, and yes you're right, I was feeling a bit defeated when I wrote it. You can't fool a grandma ;)
It doesn't happen to me very often, but when you think of how Harper has managed to fool so many people, and the demolition job he's done on this country, it's so infuriating.
However, I did try to make up for it in my next post.
And yes I know that all boomers aren't greedy or Con supporters. Just like all young people aren't fools. Like the one who complained to me that the Liberals want to tax his i-pod. Grrrrrrrrr. !#$&!
In fact according to the polls some boomers are the most progressive people in Canada. And let's not forget if it wasn't for women Harper would have had his majority long ago.
And don't worry I will NEVER give up fighting for social justice and a better Canada.
The Cons will not have this beautiful country, and we WILL defeat them...

this brought tears to my eyes my friend .... especially on this night - the night that harper took his majority, and the most selfish of canada signed the death warrant for what was once a great country.