Will Bev Oda Resign or be FIRED? 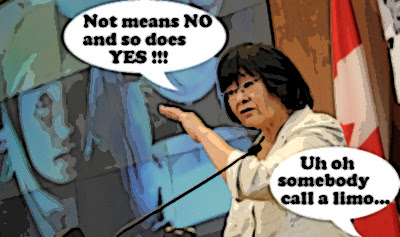 She has always been a Con stooge. From the moment she came to office she has waged war on her own kind.

She helped kill the Court Challenges Program, she slashed money for women's groups. She attacked decent humanitarian organizations. They called her limousine Bev.

Because she likes to travel in style.

So now will she resign?

A scathing ruling by the Commons Speaker Peter Milliken confirms that a key government document signed by International Co-operation Minister Bev Oda and two of her most senior officials was deliberately “doctored.”

“Any reasonable person confronted with what appears to have transpired would necessarily be extremely concerned, if not shocked,” Milliken wrote in his decision.

Or will Stephen Harper FIRE her?

Liberal MP John McKay called the incident “morally reprehensible,” and told CBC News he will be asking the prime minister to take immediate action against Oda.

He said the affair shows Oda’s management of her department has become “a gong show.”

Or do we have to fire him first?

The demise of funding for KAIROS ignited political controversy over whether Stephen Harper’s government was systematically punishing aid groups that do not share its views.

And can we please have a handwriting expert to determine who doctored that document?

So we can ARREST them.

The Cons have corrupted this country like a criminal organization.

And now it's time to PAY.

Hey Bev shall I call a limo? To NOWHERE.

Given the history of this government she'll likely get promoted.

I await with baited breath, the announcement of the criminal investigation into the doctoring of this document, NOT!

It truly defeats me.

Why would a vertically challenged woman who needs to stand on a milk crate to reach the microphones need a s t r e t c h limousine?

hi Kev...you're probably right. If there was any justice half the Con caucus would be in jail by now, and Harper would be on trial at the Hague.
However, having a nasty little scandal, hanging over their heads in the lead up to an election surely can't hurt... :)

hi Torontonian...hmmmm...I think you got me there. I can only guess she needs a s t r e t c h limo so she can drive around with the boys from the PMO, and they can forge her signature. ;)
As for the feminine form for Napoleon complex I'd guess Margaret Thatcher. Although with her expensive taste maybe it's
Marie Antoinette...

hi Omar...well thanks for ruining my weekend too. ;)
I'm hoping that the poll only reflects a desire to avoid an election. Because if it's more serious than that forget about applying for divorce. I'm applying for refugee status in Sweden...or Quebec...

hi anonymous...no no you must be wrong. If it was a Napoleon complex she would be riding a horse. And I'm pretty sure she's riding a burro backwards. ;)

Hi Simon, I wouldn't get too down over that poll, the cons are telling their own people to ignore it and to not talk about the poll results, as they don't jive with their own polling or that of other recent ones.

hi Kev...actually that's what worries me the most. When the Cons say something isn't true, nine times out of ten it is. And when they say something is true, ten times out of ten it isn't ;)
The poll may or may not be out of sync, but as Frank Graves points out on the EKOS website, the trend is alarming. And if that trend is confirmed, with an election looming, we're in real trouble...

Did you know that Kairos is a great organization working for national and international justice issues? Don't you think there is a link between the fact that Kairos supports Human Rights groups in Israel working to see the crimes against the Palestinians exposed and brought to book, and Mme. Oda's little itsy bitsy 'not'? I do.

As Minister, Bev Oda has the authority to deny funding based on her judgement, flawed or not. She should resign for her blatant disregard of the authority of Parliament.