Stephen Harper and the Hidden hand 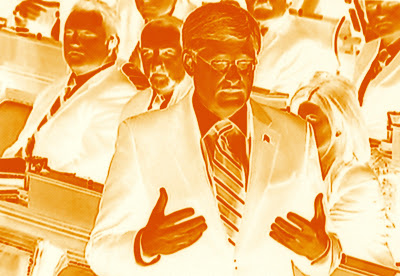 He rose in the House of Commons today like a mob boss defending one of his gang members.

While Bev Oda sat there wearing sunglasses, looking like her tongue had been cut out. Or she had just seen a horses's head.

But all I could see was the fear in his eyes, and those horrible plastic hands.

And all I could think about was this exchange.

"Minister Oda could not have made the decision by herself. This does not end with Bev Oda. This has to do with Mr. Harper."

And since Oda, if you read her latest statement carefully, still says she didn't doctor this document.... 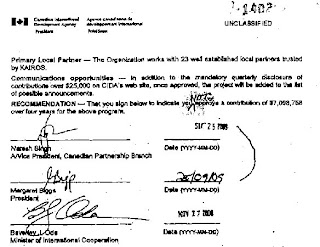 Who did? Who was the hidden hand?

And could it have been the control freak Stephen Harper himself ? 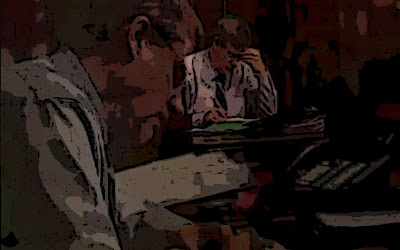 Because how else can you explain that every other woman who has ever committed the slightest offence has been demoted and humiliated by Harper. But not Bev Oda.

And what was the real motive? Was it because KAIROS was too kind to the Palestinians?

Or was it also something else?

A tale of blood and MONEY.

What about those missing months?

What happened in the missing two months?" he asked. "Maybe she had already signed it with a reluctant 'yes' but some other 'very important person' finally decided it was indeed 'no' and just crudely and hurriedly added the 'not.'"

And who in the PMO would write such a large NOT? With the impudence of power.

Oh yeah. Bev Oda is a Con tool. But don't be distracted. This case is much bigger than she is.

Because if we find that hidden hand, we'll be able to match its fingerprints to the ones on the corpse of Rights and Democracy, and so many other innocent victims of the foul Harper Regime.

This isn't a government, it's a criminal conspiracy. For the sake of our violated democracy.

We need a police investigation NOW...

The federal Conservatives – elected on promises to be squeaky clean – are using government resources to help fill their election war chest.

Simon, take a look at the pic of Odious Oda on W Kinsella's site. She looks like a mob hench person puffing away on her drug of choice.

Isn't this the anti-drug government...lol.

Thanks for the link Nadine. More b*llsh*t from these corrupt as*h*les.

Nothing surprises me anymore.