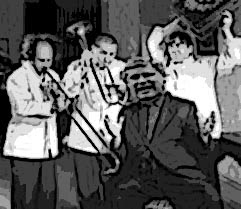 We interrupt our regular programming to take you to the PMO, where Great Political Genius Bumbling Leader is explaining his plan to fool Canadians into giving him a majority.

And the Con stooges are trying to play their victory song Mein Harper Right or NOT. But it's coming out sounding like this.

And who can blame them eh? One week ago they were cruising towards a majority.

And now they're NOT.

The federal Conservatives' lead over the rival Liberals stands at five points, according to a new survey by EKOS, putting the parties back on a familiar footing after recent surveys showed a much wider gap.

WHEEEEEEEEH. Gobble. Gobble. Fasten your seatbelts. Put on your oxygen masks !!! Ask Stockwell Day to pray for us !!!!

Although the survey doesn't have direct evidence on this point, it is possible that this recoil effect, which is a recurring pattern of the past five years, was magnified by the Bev Oda affair. In a familiar pattern of voter recoil and government missteps, the tantalizing majority of a fortnight ago has evaporated into the narrow rut advantage of the last year. Zap! You've been Odasized!

But then why should we be surprised eh? As I explained last night, when even many of your own supporters don't trust you with a majority.

Because they think you're SCARY.

You can only fly so high, before your wings fall off.

Or you're reduced to flapping around. 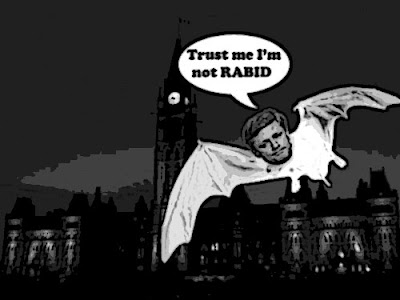 Or a batty IDIOT.

Golly. Now that we know how scared Canadians are of Harper, I see a great election campaign horror movie.The Vampire Who Would Kill Medicare. Or the Monster Who Would KILL for a Majority.

With a happy ending eh?

If the Liberals don't start fundraising, whipping up its bases and advertising with snazzy promotion, it could be a close call for a majority - certainly another Con minority. The lassitude of the opposition is our biggest enemy. You have to give the Cons credit for going all out, all the time. They trip up, they fail, they sin, they corrupt, they reek of greed, racism and hate, but they keep winning, even as a minority. But not the opposition - they're above all that. At their - and our - own peril.

hi Jymn...all that you say is true, but I still think that the real fear Canadians have for the thought of a Con majority could be a game changer. Think about it? About one-third of his supporters don't trust him with a majority. That's unheard of eh? If the opposition parties can't stoke that fear,and hit the Cons where it HURTS they deserve to lose.
But I for one am breathing a lot easier, and looking forward to the campaign... :)