The Egyptian Revolution and the Puppet Harper 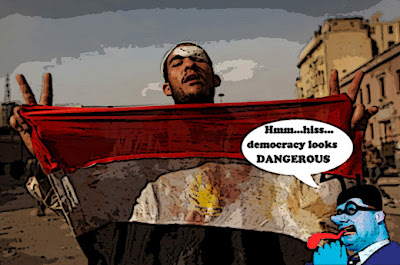 If by any chance anyone needed yet another really good reason to get rid of Stephen Harper and his ugly Cons, all they have to do is this:

(1) Watch this clip of some people in Tahrir square getting the news the tyrant had fallen. And listen to the wonderful sounds of freedom.

The word Tahrir means liberation. It is a word that speaks to that something in our souls that cries out for freedom. And forevermore it will remind us of the Egyptian people — of what they did, of the things that they stood for, and how they changed their country, and in doing so changed the world.

"Canada respects President Mubarak's decision to step down in order to promote peace and stability in the country. The future of Egypt is for Egyptians to decide.

Lecturing the Egyptians like they were children, while looking like he had just swallowed a glass of battery acid. 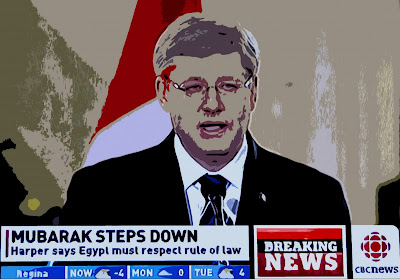 Or was about to scream "Hosni I miss you." Or "Israel I'm sorry."

(4) Read Jeffrey Simpson for an analysis of Harper's bizarre behaviour.

The Egyptian revolution, a mass people’s movement, represents something democrats everywhere should celebrate.

It’s too bad, therefore, that the Harper government, once again seeing the Middle East through the exclusive prism of Israel’s interest, remained throughout so hesitant, cautious and, frankly, on the wrong side of history in commenting on Egyptian developments.

And then ask how did this miserable little man, this blind ideologue, this painted puppet, ever become Prime Minister of Canada? How could he make a big, strong, young country look so old, and small, and weak? And will he ever stop humiliating us in the eyes of the world?

The good news? The amazing people of Egypt have shown us the way to victory. Shown us that when the people UNITE nothing can stop them.

And hopefully shamed us into not taking democracy for granted.

Why do we toss away the democratic rights Egyptians were willing to die for? Why, in a country with free and fair elections, do 40 per cent of us not bother to vote?

What would freedom-starved young Egyptians say to their Canadian counterparts who don’t think elections matter, don’t know enough to cast an informed ballot and don’t care who governs the country?

Because we really need a CANADIAN Revolution.

Here's to my brothers and sisters in Egypt. Don't listen to Harper, nobody else does.

We know freedom is the most excellent adventure.

Not something to be feared.

Down with President Puppet... 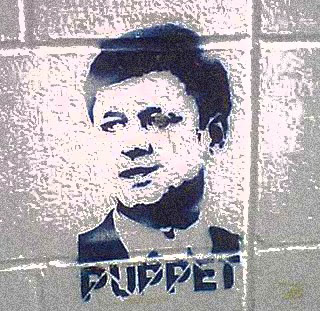 When no political party advocates for improving Canadian democracy, why should I bother to vote?

It really irks me when torturers, war criminals, electoral fraudsters, presume to lecture other people (Egyptians, Haitians) about "free and fair elections" and "the rule of law."

As to the low level of Canadian political participation, ... I'd say it's a combination of material comfort, delusion, and the sham nature of capitalist democracy.

The two main parties are bought and paid for. The Bloc is the bloc. The NDP showed under Rae and Romanow that it just wants to be a more humane manager of neo-liberalism.

The Israelis think that their Bronze Age god gave them the exclusive property rights to the Middle East and Harper's religion prays for the destruction of our beautiful planet. In the face of a genuine grassroots democracy movement Harper and his ilk stand befuddled and angry at this human desire for freedom and how it strays from theocratic authoritarianism.

I don't know what the answer is here in North America. Our Canadian and American brains are so besotted with junk food, the cult of celebrity, 24/7 millionaire sports stars, electronic geegaws and pseudo-journalism that I frankly don't have a clue as to what will finally get such a rise out of us as it has our friends in Egypt, but I fear that if and when it does come that by then it may be too late.

There was an amazing woman on the square who was interviewed I believe by CNN. Not only did she effectively stomp on each US-biased assertions the interviewer made, but at one point when asked whether she had ever voted in an election (the woman was in her 40s), she did a double-take as if the man was an idiot.

Of course I have voted many times over the years. I practice what little rights I have and make sure to spoil the ballot so that my disapproval is recorded.

I am so wowed by these courageous and determined Egyptians. I am ashamed by the mainstream media who have from the get go tried to give such a false narrative - from painting the "mobs" as Islamic fundamentalists who keep their women under their thumbs (and at home) to altruistic but misguided and politically naive children.

I don't know if this is the same woman. She is very articulate.

As seen on Rabble.

hi Skinny Dipper...nobody in this country is talking about how to improve democracy. They don't teach it in our schools, it's not in the media, and as you say the politicians don't either.
But there are many other reasons to vote. Politics is relative not absolute. If you can't find an ideal candidate, vote for the one who will do the least harm...

hi Thwap...yes I thought that Harper had a nerve eh? Who is he to lecture anyone about anything. I also note that in every statement from the Con Ministry of Disinformation there is always a reference to religious rights. As if they were more important than human rights. And despite the fact that Christians and Muslim protesters have been using their own bodies to shield each other.
And yes you're right, we're too rich, we're too comfortable to rock the boat. And too many of us are too ignorant. We may think that bad things can't happen here, until they do. And by then it will be too late...

hi Neil...I agree with everything you say. And the only satisfaction I get from this situation is seeing Harper choke on the word freedom, after using it so often and so casually.Like you I don't know what the answer is, especially since we are being dumbed down by the culture into a state of imbecility or paralysis.
I would only add one thing, I don't think enough attention has been paid to how the Americanization of Canada is making everything more difficult.
And like you I fear we won't recognize any of this until it's too late...

hi Beijing... what grossed me out the most was Harper's patronizing tone. Lecturing them like children or wogs. It was disgusting.
And so were the attempts by the media to make this awesome display of democracy in action into something threatening.
Oh well, at least now we know for sure who is for freedom. And it sure ain't those teabaggers...

Hi Nadine...keep that CRUSH truck chugging. Every step to organize and unite progressives is a step in the right direction.
Personally I was thinking of using a bulldozer. But running over them with the CRUSH truck might be even MORE satisfying... :)