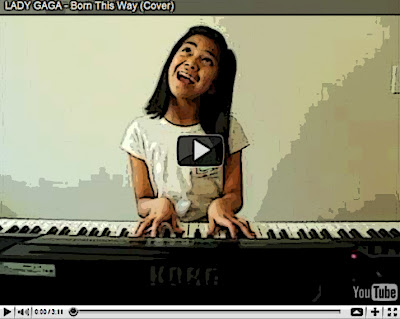 The other day I told you the story of 10-year-old Maria Aragon from Toronto, who became an YouTube star after singing Lady Gaga's new song Born this Way.

And was blessed by the great Gaga herself.

It's so good, in fact, that it made Gaga tear up with emotion. She tweeted: "Can't stop crying watching this. This is why I make music. She is the future."

And how I also thought her video was fabulous.

And deserves the more than eleven MILLION views it has received so far.

Until I learned she had left out these lines:

No matter gay, straight or bi
lesbian, transgendered life
I'm on the right track, baby
I was born to survive

Then I was disappointed. And sad.

I mean that could only happen to gay people eh? Being left out of the so-called gay anthem. And too bad more than eleven million people didn't get to hear that message. Because so many need to hear it.

But today Maria performed the song on the Ellen Show.

This time with ALL the lyrics...

And now I forgive her.

Children only do what adults tell them. She IS fabulous. So are we.

Wow such a difference! I actually love it more when she sings it;) The slower pace makes you able to concentrate on the lyrics.

She's actually from Winnipeg.I think you're confusing her with that girl who signed a record deal with Simon Cowell.

hi Retromus-ik...I liked that performance better than the YouTube video, and not just because of the lyrics.
She really has a nice voice, and she makes the lyrics a little bit more soulful. Thank goodness. ;)
BTW I just checked to see how many views her YouTube has received and she's almost at 13-million.
Of course I have plans to dethrone her. As soon as I can teach my dog to play the piano... :)

hi anonymous...thanks for correcting me. I was sure the Toronto media said she was from TO, but then they would.
I apologize to everyone in Winnipeg. Although now that I think of it, aren't they being a bit greedy. Isn't Burton Cummings enough? :)